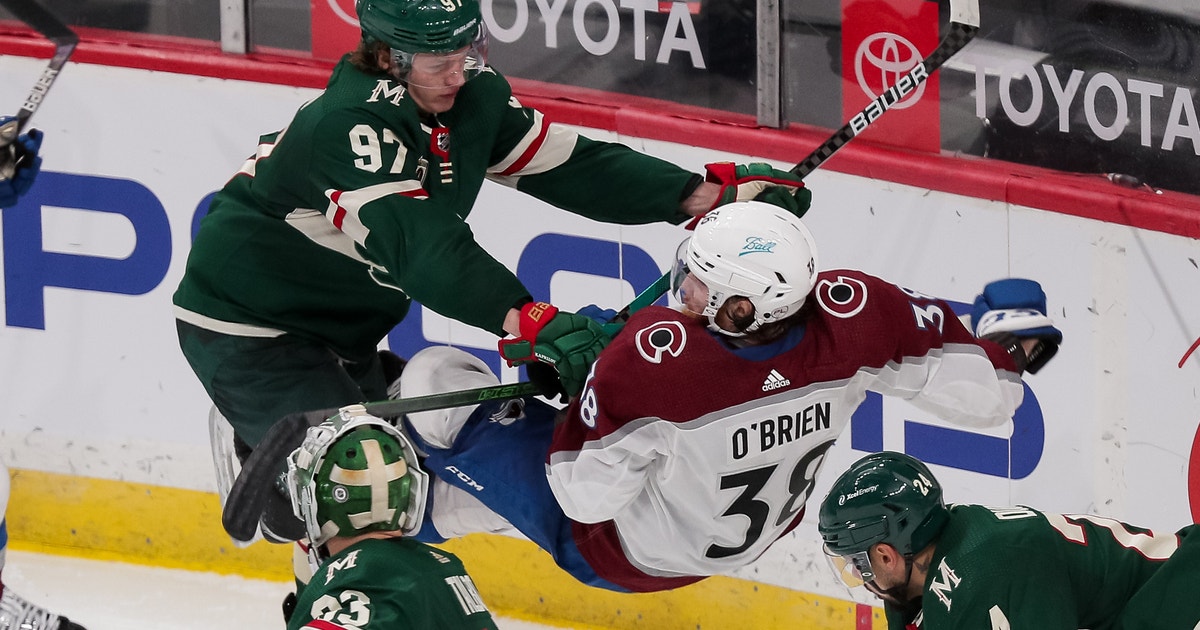 ST. PAUL, Minn. — After several humbling losses to the West Division leader, the Minnesota Wild sent quite the message to the Colorado Avalanche in their last of eight regular season matchups.

Eight was more than enough for the Wild to slow the surging Avalanche.

The statement? “We can play against you guys,” Fiala said, “if we’re going to meet them in the playoffs.”

Luke Johnson, Ryan Hartman and Joel Eriksson Ek also scored, as the Wild caught NHL wins leader Philipp Grubauer on a rare off night in the net. He was pulled midway through the third period for Jonas Johansson, who gave up the eighth goal — to Fiala — that matched the all-time Wild record. They finished with just 19 shots on goal, scoring on a staggering 42% of their on-target attempts.

“They were the more hungry team. They came out in the first period again at a pace and intensity that we didn’t match,” Avalanche coach Jared Bednar said.

Nathan MacKinnon got the Avalanche on the board just 26 seconds in the second period, after the Wild built a 3-0 lead. Andre Burakovsky and Mikko Rantanen each scored to cut the deficit to 4-3, but Kaprizov responded with a snipe through traffic less than four minutes later. The Russian right wing became the first Wild rookie with two power play goals in a game.

“He’s a great player. He’s been awesome for us the whole season, and I feel like all the lines are rolling,” Fiala said.

Two of Fiala’s goals were on a power play, too, as the Wild went 4 for 5 against an Avs penalty kill that entered the evening ranked second in the league. Six of Minnesota’s 18 goals with the man advantage have come in these last two games against Colorado. The Wild began the game with the second-worst power play in the NHL.

“We’ve been waiting for that, right?” coach Dean Evason said.

The Avalanche self-inflicted much of the damage. MacKinnon had the penalties preceding both of Kaprizov’s power play goals. Hartman scored off an interception in the Colorado zone, and Fiala also had a goal after a turnover.

“You don’t want to blow it out of proportion, but you’re not just going to let it go either,” Avs captain Gabe Landeskog said. “I think every single guy in that locker room hates losing. Some of us hate losing more than we like winning. That’s just the way it is. It doesn’t matter how many games you win in a row or where you’re at in the standings, it’s still a loss. But good teams learn from that.”

There were 18 penalties called in this tightly officiated contest, including one game misconduct for each side, and scrums broke out early and late.

Cam Talbot made 29 saves, Jared Spurgeon had three power-play assists and Victor Rask helped on two for the Wild, who became the first team to beat the Avalanche before overtime since Arizona on March 8. Colorado, which has the league’s best points percentage and trails Toronto by one point in the overall standings, was 13-0-2 on that 15-game run.

The Avalanche had won five of the first seven meetings by a combined 28-17 margin, including the 5-4 decision here on Monday that stopped Minnesota’s franchise-record home winning streak at 11 straight games. The Wild admitted 3,000 customers to that contest, the first time the gates were formally open this season. The fans had more than enough to cheer this time, tossing caps on the ice after Fiala’s third goal and giving the home team an approving roar as they skated off.

“That was cool, to have the fans here, the energy,” Fiala said. “We like to play in front of the fans, you know? Obviously to see the hats on the ice, it was very fun.”

Zach Parise (COVID-19 protocols) and Mats Zuccarello (lower body injury) each returned to the Wild lineup. Parise was on the fourth line with Johnson, who got his first career goal.

Avalanche: Visit Anaheim on Friday and Sunday. They’re 4-1-1 against the last-place Ducks this year.

Wild: Play at St. Louis on Friday and Saturday. They face the Blues in seven of their next 14 games.