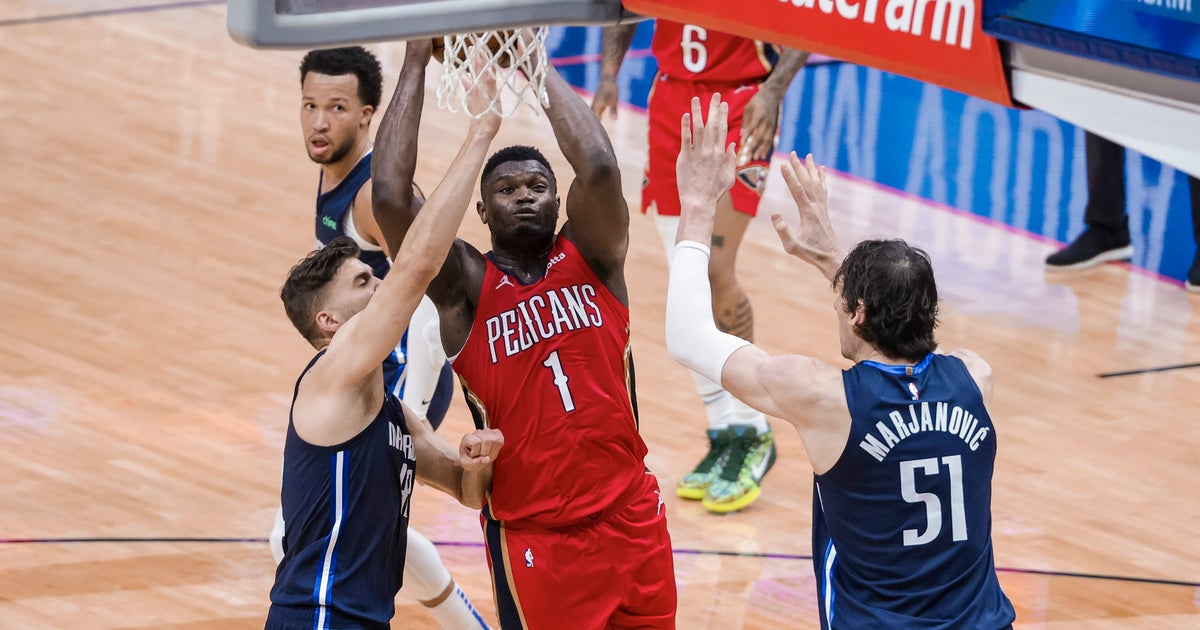 NEW ORLEANS (AP) — Zion Williamson scored 38 points, including 10 during New Orleans’ 18-8 run in the final 3:42, and Nickiel Alexander-Walker added 20 to lift the Pelicans to a 112-103 victory over the short-handed Dallas Mavericks on Saturday night.

Williamson, who had 39 points in a close loss to Denver on Friday night, recorded his 23rd consecutive game of at least 20 points.

The Mavericks played without forward Luka Doncic, who sat out with an illness, and center Kristaps Porzingis, who was resting on the second half of back-to-back games.

Dallas led 95-94 with 3:42 left, but Williamson closed with 10 points down the stretch and Alexander-Walker added two 3-pointers.

The Mavericks were led by Tim Hardaway Jr., who scored 21 of his 30 points in the first half. Jalen Brunson, starting for Doncic, added 24 points.

The Pelicans closed the first quarter with 13 consecutive points to build a 35-20 lead. Alexander-Walker, starting for the injured Lonzo Ball, led New Orleans with 11 first-quarter points, including shooting 3 of 5 from long range.

During the Mavs’ second-quarter spurt, New Orleans missed nine consecutive shots until Williamson, on the bench during most of the Dallas run, ended the drought with a layup. Williamson led the Pelicans with 15 first-half points on 6-of-10 shooting.

The Mavs scored the first eight points of the second half while holding the Pelicans scoreless for the first 3:30 to take a 61-53 lead.

Eric Bledsoe’s 3-pointer capped a 9-3 run for New Orleans as the Pelicans regained the lead, 70-68. Williamson 10 points in the quarter and the Pelicans took an 80-78 lead into the fourth.

The Pelicans built an 87-79 lead, but Dallas continually penetrated off the dribbled for a 14-4 run to take a 93-91 lead, setting up New Orleans’ final surge.

Mavericks: After missing Friday night’s 109-94 loss to Indiana with back soreness, Doncic missed the game against the Pelicans with an illness that coach Rick Carlisle said was not related to COVID-19. “He just wasn’t feeling well. We sent him back to the hotel,” Carlisle said. “We always certainly hope it’s not serious. We don’t believe it is.” … Porzingis was held out to rest his knees. “We just feel it’s the best thing for the team and for him,” Carlisle said. “I’m talking of the big picture of the season.” … Dallas trailed after the first quarter for the 10th consecutive game. They have gone 5-5 in those games.

Pelicans: Ball missed his fourth straight game with a right hip flexor strain. … Backup C Jaxson Hayes was sidelined with a right wrist sprain sustained on a dive for the ball Friday night against Denver. … In their first meeting of the season, Williamson finished with 36 points on 14-of-15 shooting from the floor.

Mavericks: At Oklahoma City on Monday.

Pelicans: At Boston on Monday.

What’s the Deal with Lil Nas X’s Satan Shoes and the...

Body Positivity Activist Margie Plus on How Her Signature Neon Hair...