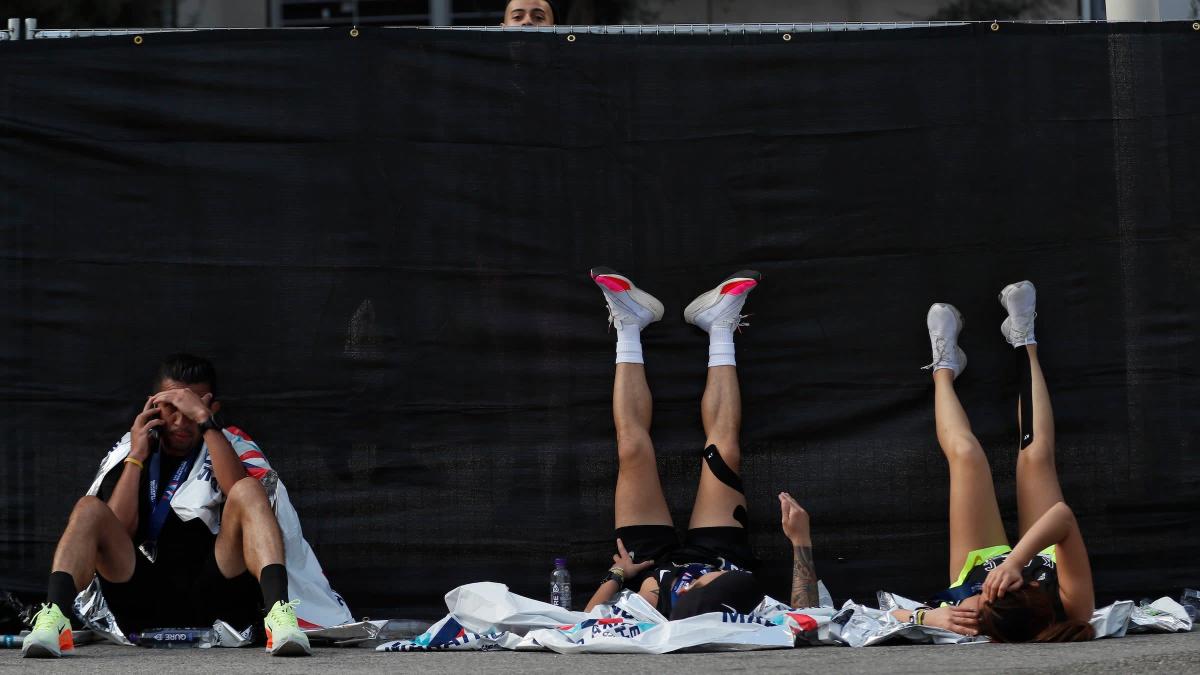 Every sport has specialized training, specialized gear, specialized nutrition. Heck, every niche of every sport is specialized–the training an 800-meter runner does is worlds away from that of a marathoner. Yet, the science of fatigue to date has been one-size-fits-all.

While the outward manifestation of fatigue–the reduction in force of muscle contraction–is universal, it turns out the reasons that fatigue accrue are different in different sports. Guillaume Millet, professor of exercise physiology at Jean Monnet University (St-Etienne, France), recently published a study on those differing mechanisms of fatigue in running versus cycling.

By knowing how fatigue happens, Guillaume, his associate Callum Brownstein, and others on their team of researchers hope to be able to design tailored interventions specific to running or cycling that would reduce or delay fatigue. This could have significant ramifications for practitioners of swim-bike-run.

RELATED: How to Avoid Late-Race Fatigue

First, Millet’s team needed to understand the disparate pathways runners and cyclists took to fatigue, and that required wading into the scientific weeds. He broke down their study for us:

They recruited seventeen trained athletes–triathletes, and trail runners who also cycled–to ride for three hours and run for three hours on separate days, at the same relative intensity. The test subjects’ ability to contract their quads was measured before exercise, at 90 minutes, and then after. As expected, after both running and cycling, the athletes’ maximum contraction force was reduced by about 25%.

“When we look at why muscles are weaker when fatigued, there are basically two options–either the muscles themselves get weaker, or the brain, the central nervous system, isn’t able to send neural messages to drive the muscles optimally. It’s often a bit of both causes,” Millet said.

To determine how that fatigue occurred, the researchers then stimulated nerves electrically during maximal contraction and then, a few seconds later, in a relaxed state. This electrical stimulation allowed the team to isolate brain activation from muscle contraction–ie. they could make the muscle contract without involving the central nervous system, and thereby determine where the fatigue was happening.

If you stimulate a muscle contracting maximally before exercise, almost nothing happens. That’s because the brain is fresh–it’s able to do its job, which is to send messages to the muscles to contract. And the muscle is fresh too, so it reacts forcefully to that message. Both brain and muscle are already working at full capacity, so the superimposed electrical stimulation doesn’t further increase the force of the contraction.

But after three hours of running, much more so than after cycling, when electrically stimulated at maximal contraction, the muscle contraction increased in force. The muscles weren’t completely maxed out, there was more ability to contract, but the central nervous system was unable to recruit all the muscle fibers, Millet explained. This means the primary limiter is neural fatigue.

“It was not so much due to a reduction in strength, it was due to an inability of the brain to send a signal,” Millet said. The fatigue was a function of less effective neural messages.

To measure muscle fatigue, Millet stimulated muscles in a relaxed state. If the muscle was not fatigued, the electrical stimulation would elicit an increase in force. “But if we get less force after stimulation, it means something wrong happened in the muscle, not the brain. The fatigue happened in the muscle.” This was the kind of fatigue that was seen more after the test subjects biked than after they ran.

The primary finding of their study is that, in running, fatigue is largely–not completely–a factor of the brain’s loss of ability to send signals to the muscles. Fatigue in cycling is almost entirely an inability of the muscle to contract as forcefully.

And why is that? Well, not only is the answer complicated, it’s also purely speculation at this point, Millet said.

His best guess has to do with the fact that, in running, the muscles are stretched with every step, whereas cycling involves concentric contraction–the muscles are shortened. The repeated stretching of muscles while running may inhibit their ability to send messages to the brain, or “excite” the brain. The brain, in turn, sends fewer or less effective signals back to the muscles, resulting in less force with each contraction. Which is the definition of fatigue. So, running fatigue is not only happening in the brain–muscles are involved in the feedback loop–but the brain is involved to a greater extent in running fatigue than in cycling fatigue.

The concentric contractions involved in cycling, he’s, again, speculating, don’t affect the brain’s ability to send messages to the muscles as much as while running.

Panning back out to the larger picture, Millet’s work has already been instrumental in tailoring exercises for cancer survivors. And for triathletes? Down the road, might there be an anti-fatigue supplement targeting the neural pathways or the muscle-brain feedback loop? Or a training protocol tailored to the muscle-associated fatigue of cycling? “This study is a first step,” he said.

For exclusive access to all of our fitness, gear, adventure, and travel stories, plus discounts on trips, events, and gear, sign up for Outside+ today.

Bradley Wiggins: ‘Winning in 2012 wasn’t a happy thing – it was more of a box-ticking exercise’

NFL odds: Bet on this surprise team to win their division