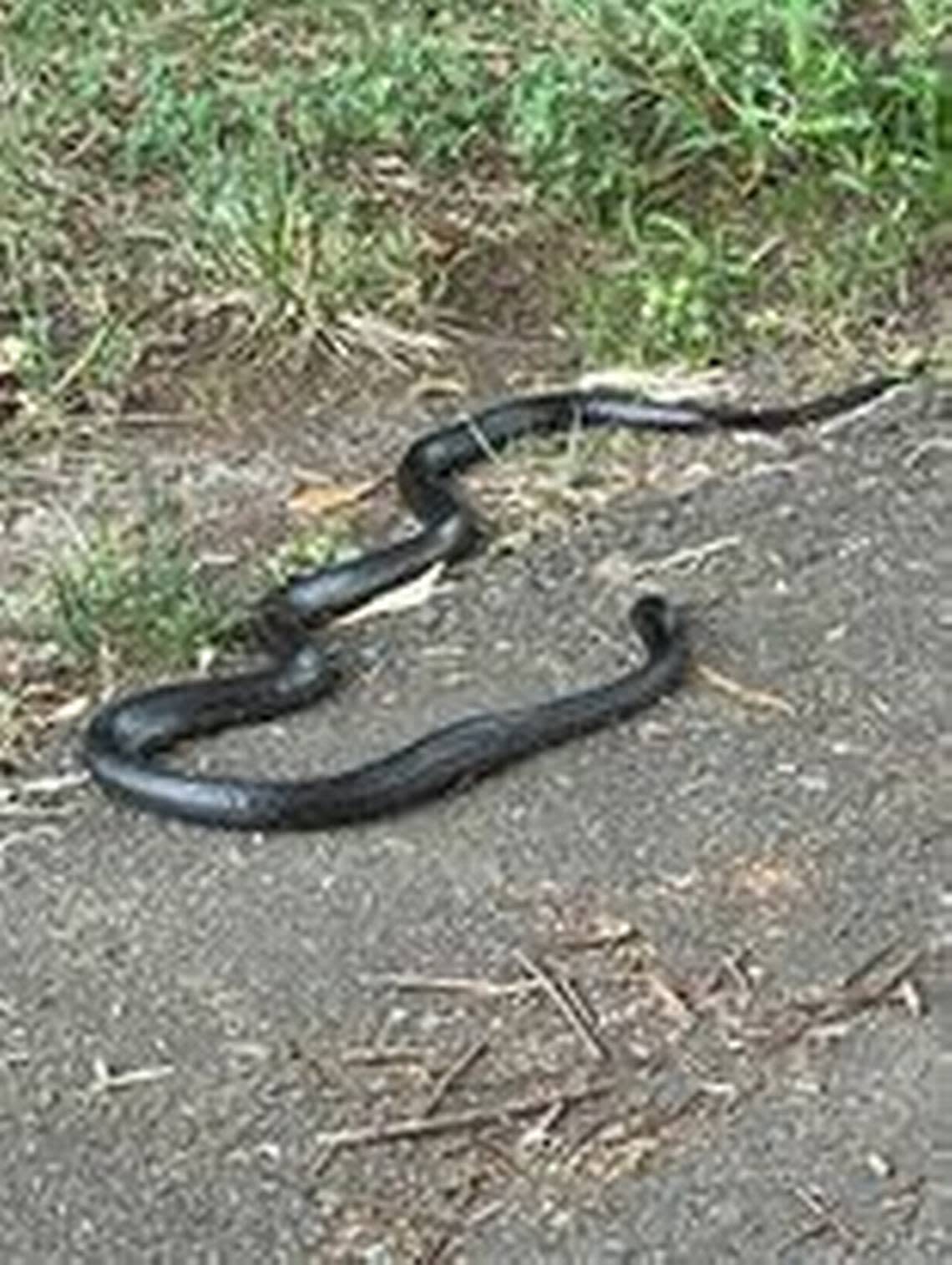 A Lake Norman woman still recuperating from a snake attack in May said she was “traumatized” all over again by another unexpected encounter with a staring, slithering serpent.

This snake rose from the grass near her Mooresville home, stared at her and followed as she fled with her two dogs, Heatherly Noble told The Charlotte Observer.

“I was scared to death,” Noble said of Tuesday’s episode. “He was a big fat black snake.”

Noble was walking her Australian cattle dog Bella and Chiweenie dog Mickey on leashes about a half-mile from home when she said she saw what appeared to be a black plastic bag littered in the grass.

She figured the bag came from a nearby doggie-bag clean-up station, so she went to pick it up.

In a split-second, the bag transformed before her eyes into an 8-foot-long snake that rose and stared at her, she said.

“It terrified me,” Noble told the Observer.

Noble still wears a leg brace after she tore her ACL in May when a non-venomous snake rose from a tall bush outside her front door and flashed its fangs at her. Noble was on a ladder at the time trimming the bush.

“Like a demon rising from the depths of hell,” she told the Observer at the time.

She tore her ACL when her foot got caught in a rung of the ladder as she instinctively backed from the serpent, which bit her earlier that morning as she trimmed the bush.

Her final surgery is scheduled for Sept. 16, she said.

When she saw the latest snake, she said, “I hobbled away as fast as I could. It was completely out in the open, laying right by the sidewalk, and it’s a ‘good snake’ and wasn’t an aggressive one like the black racer (of her first encounter), thank goodness.”

She snapped pictures of the snake, which remained out in the open, eventually ignoring them, as she and her dogs got further away.

Noble said she was already “traumatized” by the snake encounter in May, and this one didn’t ease her fears.

Noble, a corporate payroll director, moved to southern Iredell County a couple of years ago after years in Texas. She loves landscaping and was surprised at how plants grow so quickly here compared with more arid Houston and Dallas.

But the snakes here, she said. They seem to be everywhere.

Noble’s homeowners’ association even sent a notice this year that venomous copperhead snakes had bitten a couple of homeowners’ dogs, she said.

Noble insists she was only kidding when she posted on Facebook that she may move from the state due to the snake encounters, but she told the Observer that the encounters have “traumatized” her.

“I don’t want to go out of the house anymore,” she said.

‘Like a demon from hell.’ Video shows NC woman’s terrifying encounter with a snake.

Woman ‘terrified’ after a snake in her toilet was ‘trying to climb out,’ video shows