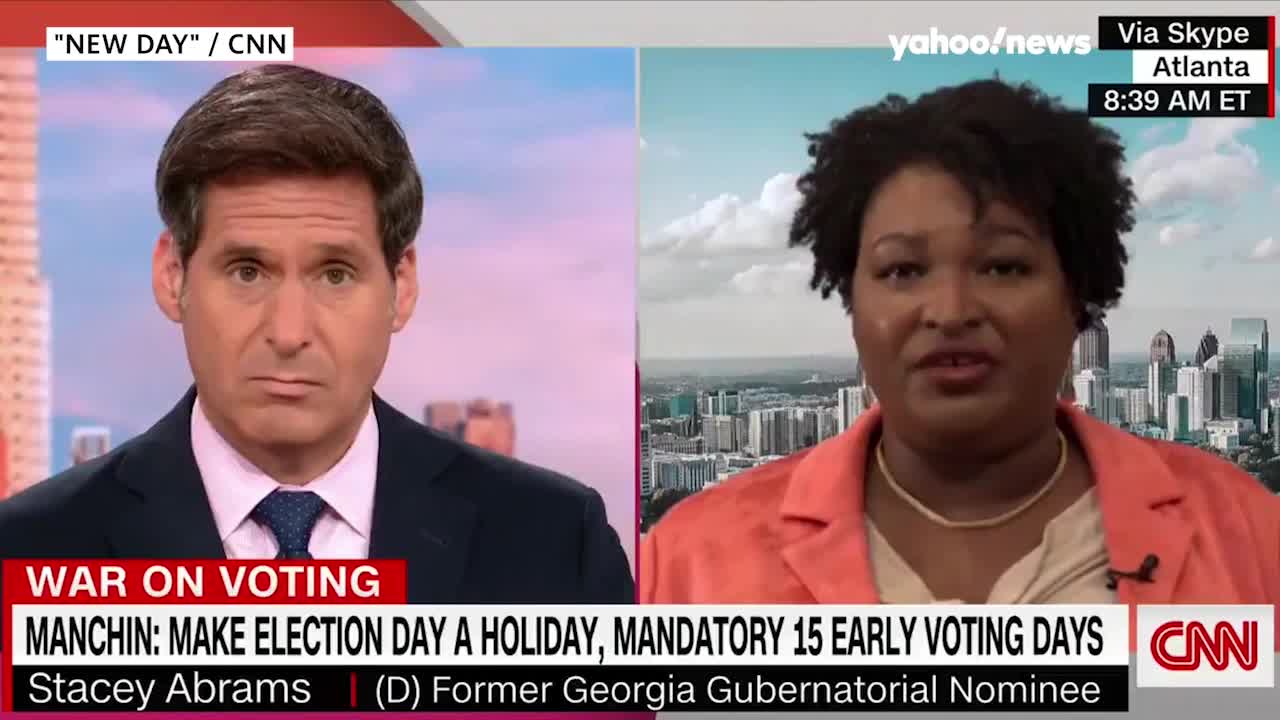 – Joe Manchin– people have been asking him exactly what could you support. He has now laid it out. Some of those proposals would be significant changes and requirements from state to state. Is that a compromise you could support?

STACEY ABRAMS: Absolutely. What Senator Manchin is putting forward are some basic building blocks that we need to ensure that democracy is accessible no matter your geography. And those provisions that he is setting forth are strong ones that will create a level playing field, will create standards that do not vary from state to state, and I think will ensure that every American has improved access to the right to vote despite the onslaught of state legislation seeking to restrict access to the right to vote.

– You could accept this compromise what Joe Manchin laid out even if voter ID was part of it?

STACEY ABRAMS: That’s one of the fallacies of Republican talking points that have been deeply disturbing. No one has ever objected to having to prove who you are to vote. It’s been part of our nation’s history since the inception of voting. What has been problematic is the type of restrictive ID that we’ve seen pop up. In South Dakota where Native Americans were told that they had to provide IDs with addresses the state refused to provide. We have states where students are not allowed to use their student IDs, but you can use your gun license.

Our point is simply that the restrictions on the forms of ID should meet the needs of the people. And what he is proposing makes sense because it says what we’ve had in this country for so many decades, which is that people can prove their identity in various ways, but we should not narrow the level– narrow the playing field so much that we push voters out of participation simply because of restrictions that make no sense and do not increase security. I even write about voter ID in my book, “Our Time is Now”. I support voter identification. I reject restrictive voter identification designed to keep people out of the process.

– And I just want to you to say this once again because I think it makes some news here– you’re a leader in this– Joe Manchin is proposing an alternative. I’m sure you would like the For the People Act to pass in its entirety. But if this is the alternative that is presented, this is something you would urge Democrats in the Senate to get behind?

STACEY ABRAMS: This is a first and important step to preserving our democracy. Unfortunately, we have been watching a slow motion onslaught where state after state, we are seeing anti-voter legislation, legislation that seeks to criminalize and intimidate election workers, and voting laws that will subvert democracy by making certain that small coteries of people can overturn election results. Those should be untenable to any American.

And if Joe Manchin and the US senators who support this legislation are willing to come together on a compromise, then we will make progress. We will help to continue to ensure access to our democracy for as many Americans as possible. And that is always a native good.