Home World As more brown recluses start to appear, here’s how to recognize them... 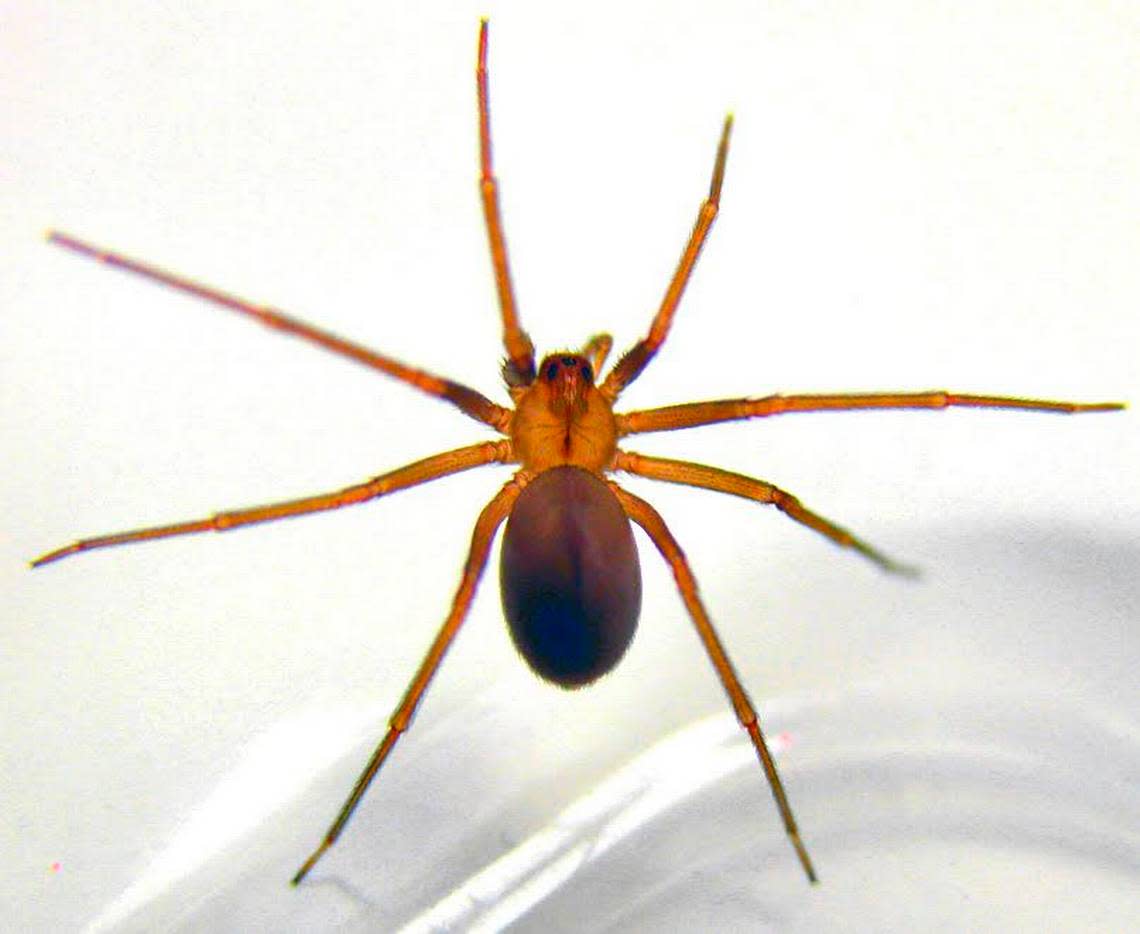 You could be seeing one of two venomous spiders native to Kansas more often in your living space as it gets warmer this summer — and it could be the most prevalent spider living in your home.

“In my opinion, after 40 years of doing pest control and household pests, I think the brown recluse spider is probably our most common household spider,” said Jeff Whitworth, entomologist and extension specialist in entomology at Kansas State University.

The brown recluse spider, whose bite can cause tissue loss, scarring and infection for humans if left untreated, will be in its most active phase from now until October. Brown recluse activity typically increases in the summer as the spiders move into people’s living spaces to escape the heat from outside and from attics, said Gerry Marsh, an associate certified entomologist and the president of Patton Termite and Pest Control.

Here’s a guide on how to stay safe, recognize the spider and prevent yourself from being bitten this summer and beyond.

As their name implies, brown recluse spiders are reclusive — Whitworth describes them as shy — and often go unnoticed as they spend their time in places where there is not a lot of human activity, such as attics, closets and basements, according to Kansas State University Research and Extension.

Whitworth said the spiders spend their time in dark, warm and humid locations where they can find other insects to prey on. Brown recluse spiders hunt for food at night, so during the day they often hide in shoes and under clothes that are left on the floor and crawl out at night to search for food, Whitworth said.

“We tell everybody, one of the proper ways of avoiding brown recluse spiders is to make sure you don’t leave any of your clothes on the floor, or if you pick up your shoes every morning, shake them out real good because that’s where they’re hiding,” Whitworth said.

HOW TO IDENTIFY A BROWN RECLUSE AND WHEN THEY BITE

There are several distinct characteristics of the brown recluse spider, including the following, according to K-State Research and Extension:

Whitworth said the brown recluse usually has a dark violin shape on the front part of its body, and the back part is usually a little bit darker. They are not hairy spiders, and the largest that they can get is about the size of a quarter, he said.

The brown recluse spider does not search for humans to bite. Rather, it usually only bites when it feels threatened, Whitworth said. Whitworth, who was bitten by the brown recluse, said the spider bit him when he tried to hit one off from his chin.

“I think a lot of times, when they feel threatened, their natural reaction is to rear up and bite, or if you crush them, lots of times you may just push the fang into your skin,” Whitworth said. “You’re putting on your shoe, or your shirt or your pants or something and there’s one in there, or you hit it and you actually push one of the fangs or both of the fangs into your skin.”

WHAT TO DO IF YOU SEE A BROWN RECLUSE

“Remember, a brown recluse spider is probably more scared of you than you are of it,” Whitworth said. “They’ll leave you alone if you leave them alone or contact pest control.”

HOW TO PROTECT YOURSELF, PEST CONTROL

There are several precautions that can be taken to protect yourself from the bite of a brown recluse, in addition to shaking out your clothes and shoes before putting them on.

Craig Betts, pest control technician and vice president of Betts Pest Control, said he finds that brown recluse spiders particularly like cardboard boxes and other storage areas. To prevent the spiders from getting into storage, Betts said he recommends keeping storage items in sealed containers and plastic totes. Clothes in storage that are unsealed are more likely to have brown recluses hiding in them, Betts said.

“You pull out a blanket and you pull out a winter coat hanging down in the basement,” Betts said. “What’s the likelihood of having a brown recluse in those items? It’s pretty darn high, if the place isn’t treated on a regular basis. There’s literally thousands and thousands of people that aren’t aware of this and put themselves at risk by moving winter clothes and such down in the basement.”

Marsh said decluttering the home, using a shoe rack that does not touch the floor and not using bed skirts are all ways to help avoid encountering and getting bitten by a brown recluse.

In addition, Marsh said it is important to take care of the exterior of your home to avoid a brown recluse infestation. Ways to do this include not having bushes or shrubs against your home’s foundation or ivy growing at the side of your home, and to ensure that you have good drainage away from the home.

“By attracting other insects to the home, you will also attract spiders to feed on them,” Marsh said. “It’s kind of a food chain you’re trying to break there as well.”

Emily Davis, director of educational programs at the Great Plains Nature Center, said she recommends cleaning and picking up around your area to reduce the amount of places for the spiders to hide. In addition, she said another method that has worked for her is sprinkling Diatomaceous Earth on the ground, which can be purchased at home improvement stores.

“It’s a very safe powder that’s a chemical-free way you can treat for spiders,” Davis said.

Pest control services provide other options to get rid of brown recluse spiders.

Marsh said seeing one brown recluse a day or several times a week could be an indication of a brown recluse infestation, which would need to be addressed by a pest control service.

“They are reclusive,” Marsh said. “They really don’t like to be out in the middle of the day when people can see them. That’s a little unusual.”

Betts said because brown recluse spiders have non-absorbent legs that go through lots of different chemicals without getting poisoned, he recommends using a “microcap” chemical, a contact capsule in microscopic form applied with a water carrier.

When it dries, the microcap leaves microscopic particles that stick onto the hairs on the brown recluse spiders’ legs once they walk on it. When the spiders ingest the particles while cleaning themselves, it kills them. The microcap differs from less-expensive chemicals that can be bought at the store, and is more effective, Betts said.

He said his company reapplies the chemical once every 60 days, for an average cost of approximately $70.

“In the number of doctor visits and time off of work, what’s the price of that, as opposed to paying a professional to come in and spray your house once every two months?” Betts said. “$60-70 seems to me [awfully] cheap to keep spiders out of your house that may cause you to lose a great big hunk of your skin.”

People react differently to the bite of a brown recluse, and according to an Occupational Safety and Health Administration fact sheet, the severity of a bite can differ.

Within several hours, the bite usually reddens and within 24-36, people often experience restlessness, fever, chills, nausea, weakness and joint pain, according to the OSHA. Tissue and the surrounding area at the site of the bite dies and eventually sheds.

The OSHA says to clean the bite area with soap and water and apply ice to the bite area to “slow absorption of the venom.” In addition, the OSHA says to “elevate and immobilize the bitten extremity,” capture the spider for identification purposes if possible, and to seek medical attention.