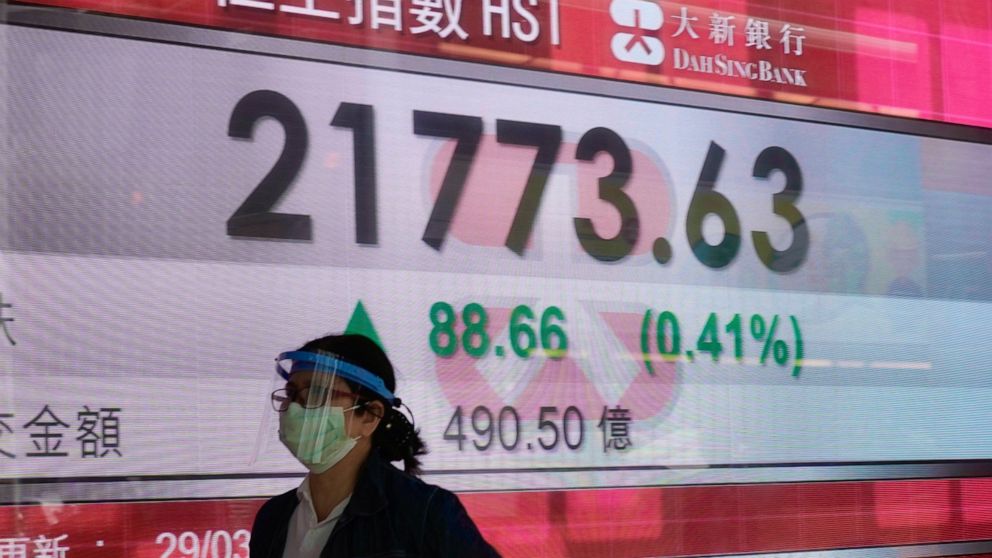 BANGKOK — World shares were mostly higher Tuesday as another round of peace talks between Russia and Ukraine got underway.

Markets remain unsettled as investors try to gauge what’s next for inflation and the global economy as the repercussions of Russia’s invasion of Ukraine continue to play out.

The first face-to-face talks in two weeks between Russia and Ukraine began Tuesday in Turkey, raising meager hopes of progress on ending a war that has ground into a bloody campaign of attrition.

Russia’s MOEX index climbed 3.7% in the second day of full trading after it was closed for about a month following the Feb. 24 invasion of Ukraine. Limits have been imposed to curb volatility.

A two-phase lockdown on Shanghai’s 26 million people is testing the limits of China’s hardline “zero-COVID” strategy whose effects are being felt beyond the country’s borders.

Australia’s S&P/ASX 200 surged 0.7% to 7,464.30 as the government said it plans to increase spending on national security while reducing costs for households, in part by reducing a tax on gasoline. Treasurer Josh Frydenberg was to present the proposed budget Tuesday.

“China, Japan, South Korea and Taiwan are major oil importers, hence lower oil prices may be deemed as positive for their economies,” Yeap said in a commentary.

U.S. crude oil resumed its climb upward, gaining 82 cents to $106.78 a barrel in electronic trading on the New York Mercantile Exchange. On Monday, it slumped 7% on news of the lockdown in Shanghai, which could dent global demand, Brent crude, the international standard, fell 6.8%.

Bond yields edged higher. The yield on the 10-year Treasury rose to 2.50% from 2.46% late Monday. Bond yields have been rising as Wall Street prepares for higher interest rates. The Federal Reserve has already announced a 0.25% hike of its key benchmark interest rate and is prepared to continue raising rates to help temper the impacts of rising inflation.