Oct. 21 (UPI) — The 66-million-year-old skeleton of a triceratops — the largest one ever found, in fact — is going on the auction block on Thursday and is expected to sell for nearly $2 million, auctioneers say.

The auction for the triceratops skeleton known as “Big John” will happen in France.

The skeleton, which is about 60% complete, measures 26 feet long and is expected to sell for between $1.4 million and $1.8 million, according to Parisian auction house Hotel Drouot.

Big John’s skull alone, which is 75% complete, measures 6.6 feet wide and his two largest horns each are nearly 4 feet long and 1 foot wide at the base.

The auction house says that a laceration on Big John’s collarbone is evidence of a fight with a smaller triceratops.

“These violent combats took place during the lifetime of these animals, probably for reasons of territorial defense or courtship of a mate,” Hotel Drouot said in a statement.

The triceratops, which means “three-horned face,” were herbivorous chasmosaurine ceratopsid dinosaurs that emerged during the late Maastrichtian stage of the Late Cretaceous period, close to 70 million years ago in what’s now North America. 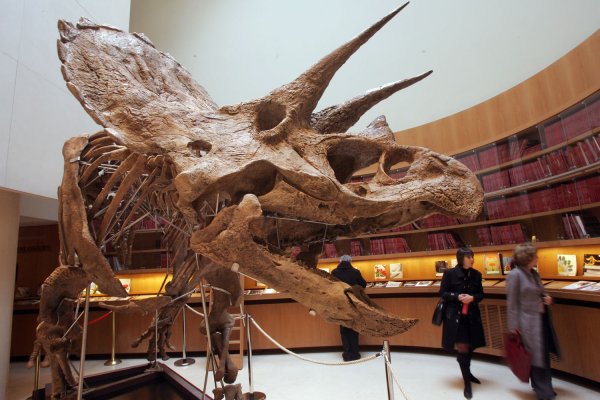 A triceratops skeleton is seen at Christie’s in Paris, France. A different skeleton going up for auction on Thursday is about 60% complete, measures 26 feet long and is expected to sell for as much as nearly $2 million. File Photo by Eco Clement/UPI

“Big John lived in Laramidia, an island continent stretching from present-day Alaska to Mexico. He died in an ancient flood plain — the current Hell Creek geological formation [in South Dakota] — allowing the conservation of his skeleton in mud, a sediment devoid of any biological activity.”

The bones were discovered in May 2014 by geologist Walter W. Stein Bill and it was unearthed in 2015.

In 2020, the bones were reassembled at the Zoic workshop in Italy under the supervision of paleontologist Iacopo Briano, who said the skeleton was 5-10% larger than that of any other triceratops previously discovered.

“It’s a masterpiece,” Briano said, according to The Guardian. “There are quite a few triceratops skulls around the world, but very few of them [are] almost complete.”

A year ago, a 67 million-year-old Tyrannosaurus rex skeleton sold at auction for a record-breaking $31.8 million to become the most expensive fossil of all time.

Auctioneer Alexandre Giquello, said Big John’s immense skeleton would likely only pique the interest of about a dozen collectors throughout the world.

“There are … people who are passionate about science and paleontology,” Giquello said, according to The Guardian. “They are often quite young, coming from new technologies; they are in fact the Jurassic Park generation: they have seen the movies and have been immersed in this Hollywood mythology.”

“[Big John] is both a miracle of nature and a work of art,” Hotel Drouot added.