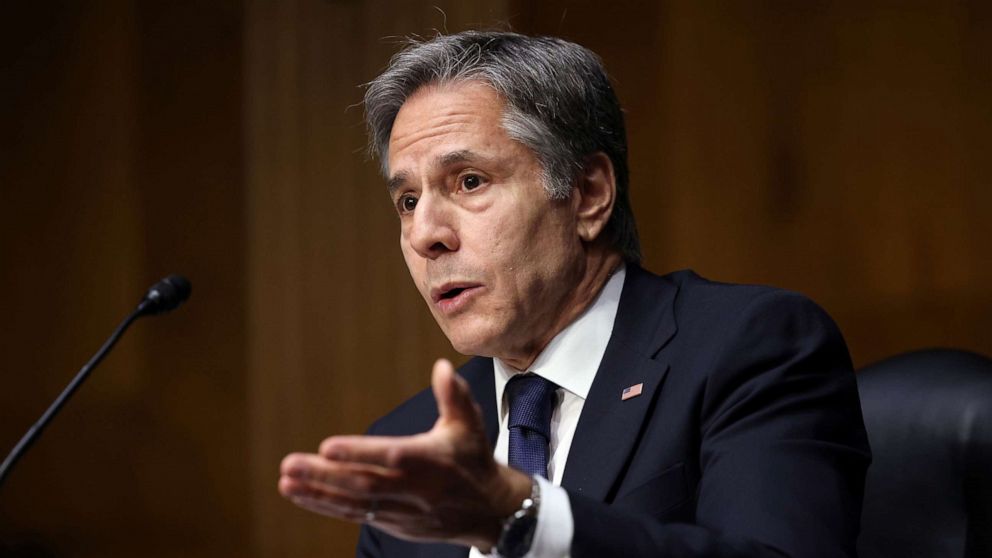 Now, with Trump sidelined in Florida and Netanyahu leading the opposition, President Joe Biden and Prime Minister Naftali Bennett are focused on pragmatic diplomacy rather than dramatic initiatives that risk fomenting opposition at home or distracting from other priorities.

“In the past few years, mistakes were made,” Lapid told Blinken as they sat down for talks in a Rome hotel. “Israel’s bipartisan standing was hurt. We will fix those mistakes together.”

Lapid said he had spoken with Democrats and Republicans since taking office and had “reminded them all that we share America’s most basic, basic values — freedom, democracy, free markets and constant search for peace.”

Blinken noted that even though the two governments are new, “the foundation that we’re working on is one of an enduring partnership, a relationship, friendship between the United States and Israel.

The push means aiming for smaller achievements, such as shoring up the informal cease-fire that ended last month’s war with Gaza’s militant Hamas rulers and replenishing Israel’s Iron Dome defense system. A major push to revive the long-dormant peace process between Israel and the Palestinians could unsettle the delicate balance.

“Nobody thinks it’s a good idea to start charging through on a major new peace initiative,” said Ilan Goldenberg, a Mideast security expert at the nonprofit Center for a New American Security. “But there are things you can do quietly under the radar, on the ground, to improve the situation.”

That approach — of managing the conflict rather than trying to solve it — may succeed in papering over domestic divisions. But it also maintains a status quo that the Palestinians find increasingly oppressive and hopeless, and which has fueled countless cycles of unrest.

The Americans and Israelis will try to work out differences away from the public, as in Biden’s “quiet” diplomacy, when he privately urged Netanyahu to wind down the Israel-Hamas war ahead of a truce that took effect May 21.

“We believe the way to discuss those disagreements is through direct and professional conversation, not a press conference,” Lapid said.

Both governments will try to preserve Israel’s fragile governing coalition, in part by reducing provocations that played a part in sparking the 11-day war that claimed at least 254 Palestinian lives and killed 13 people in Israel.

The new coalition in Israel shares little beyond the conviction that Netanyahu had to go. It’s composed of eight parties, each effectively with veto power on decisions. So if even one party bolts, Israel’s government would be at serious risk of collapse, with Netanyahu waiting just offstage.

At least in the short term, Lapid, a centrist, will be Israel’s point man on repairs to the tattered relationship with Biden and the Democrats. The party controls both houses of Congress but is increasingly divided on the Mideast conflict, with progressive members calling for the U.S. to exert more pressure on Israel.

“What they’re building now is mutual trust,” said Michael Oren, former Israeli ambassador to the United States under Netanyahu. “I expect a change of tone rather than of substance… but there’s a possibility that it could produce something better for Israel.”

Topping the agenda in both countries are talks in Vienna over reviving Iran’s 2015 accord with world powers to limit Tehran’s ability to develop nuclear weapons. Trump, with Netanyahu’s backing, pulled the U.S. out of the deal in 2018 and imposed sanctions on the Islamic Republic. Biden promised to restore and expand the agreement.

“Israel has some serious reservations about the Iran nuclear deal that is being put together in Vienna,” Lapid said, before pledging that Israel would make its objections privately. Netanyahu had loudly and publicly opposed the deal when the Obama administration was negotiating it.

Blinken acknowledged the disagreement. “As the closest of friends do, we will have occasional differences,” he said. “We have the same objective; sometimes we differ on the tactics, and we, I think, are very clear and direct to each other when that’s the case and that’s exactly how it’s supposed to be.”

Though opposed to a new accord, Israel’s new government seems intent on trying to influence the talks rather than scuttle them altogether. Netanyahu enraged many Democrats when he condemned the “very bad deal” before a joint session of Congress in 2015.

Netanyahu’s defiance of the Obama administration, followed by his close ties to Trump, was widely seen as having undermined the traditional bipartisan U.S. support for Israel. And while Israelis welcomed Trump’s diplomatic gifts to Netanyahu over the years, their timing often led to suspicions that he was trying to keep the prime minister in power through deadlocked elections and an ongoing corruption trial.

Even the right-leaning Bennett, who is ideologically aligned with the hawkish Netanyahu, has toned down the rhetoric on Iran.

“We will continue to consult with our friends, persuade, discuss, and share information and insights out of mutual respect,” Bennett said Thursday. “But at the end of the day, we will be responsible for our own fate, nobody else.”

Tamping down tensions — or at least not inflaming them — is a key strategy, the officials said. For example, Bennett is a religious nationalist who supports settlement expansion in the occupied West Bank. But he risks losing his job if he alienates his dovish coalition partners.

Officials expect there will be little settlement expansion beyond so-called “natural growth.” But that’s a vaguely defined term that could allow for considerable construction, as well as moving ahead with major infrastructure projects that pave the way for explosive future growth.

Blinken spoke of the need to resolve the Israeli-Palestinian conflict but did not offer any kind of timetable or any strategy to “offer a more hopeful future for everyone: Palestinians and Israelis alike with equal measures of opportunity and dignity.”

And, while the Biden administration supports and hopes to expand on the Trump-era Abraham Accords that normalized relations between Israel and several Arab countries, Blinken said they “are not a substitute for engaging on the issues between Israelis and Palestinians that need to be resolved.”

On the U.S. side, the Biden administration has made clear it wants to extricate the country from intractable conflicts in the Middle East and focus on other challenges, such as climate change and competition with China.

On Monday, outgoing Israeli President Reuven Rivlin is to visit Washington at Biden’s invitation. A group of House Democrats are planning an official trip to Israel as soon as Congress’ July 4th recess.

There’s even talk of Lapid and Bennett traveling to Washington later in the summer, separately or together, the officials said. Bennett will serve as prime minister for the first two years, followed by Lapid, the architect of the coalition.

All the officials spoke on condition of anonymity to discuss administration plans and logistics, which have not been finalized.

So far, the reset seems to be functioning. But with the Israeli coalition barely two weeks old, significant challenges loom.

Biden has moved to reverse Netanyahu-backed Trump policies that alienated the Palestinians, and the administration has said Israelis and Palestinians should enjoy equal measures of security and prosperity.

But the U.S. has yet to explain how it intends to bring that about without ending Israel’s half-century military occupation of the West Bank, its blockade on Hamas-ruled Gaza and discriminatory policies in Jerusalem that fueled a spring of unrest.