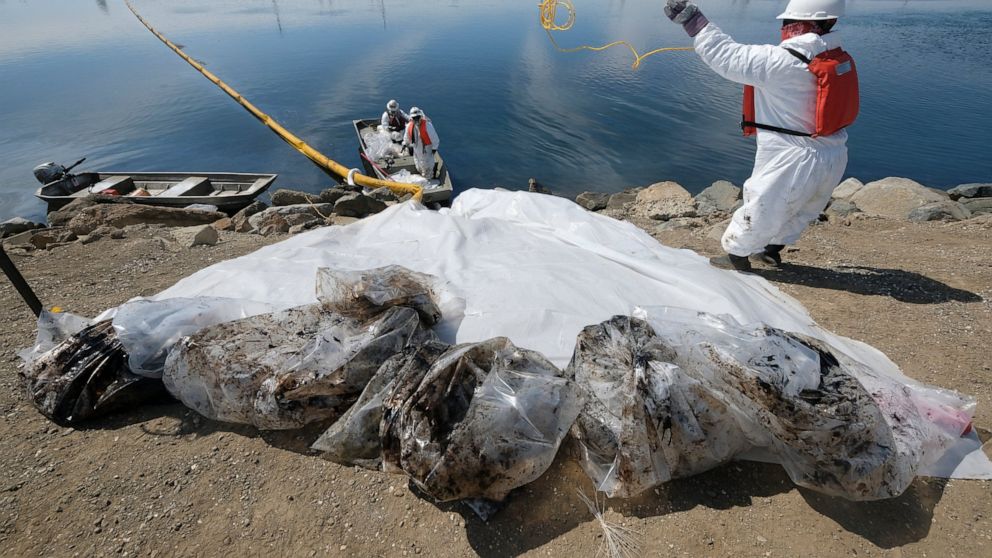 Crews have deployed skimmers and floating barriers known as booms as they try stop oil from a massive spill in Southern California from further fouling the beaches, wildlife and protected wetlands of the area

HUNTINGTON BEACH, Calif. — Crews on Sunday deployed skimmers and floating barriers known as booms as they tried stop oil from a massive spill in Southern California from further fouling the beaches, wildlife and protected wetlands of the area.

Authorities have multiple tools and techniques they can deploy try to slow the oil from spreading and then cleaning it up from the waters and land areas – methods they’ve honed in decades of work trying to mitigate the damage from such environmental disasters.

Experts are still trying to determine why the leak off Orange County happened but Amplify Energy said Sunday it had stopped the oil from flowing. At least 126,000 gallons (572,807 liters) had spilled into the waters.

Contractors in small boats deployed the skimmers and booms, hoping to keep more oil from getting into the wetland Talbert Marsh in Huntington Beach. Booms are interconnected barriers spread across the water.

On Sunday the contractors also used plastic bags to gather oil from the water. The National Oceanic and Atmospheric Administration says such hands-on work is often used in cleanup response.

The agency says crews will use shovels and other hand tools to remove oil from the shoreline, low-tech techniques that are employed when heavy machinery can’t reach areas.

According to the agency, other methods that can be used include flushing oil from shorelines into the water, where it’s easier to collect; industrial vacuums to hoover up oil from land areas; specialized absorbents that “sponge” up oil but not water; and “in situ burning,” which is lighting oil from a new spill on fire while it floats on the surface.

How the proposed billionaires’ income tax would work