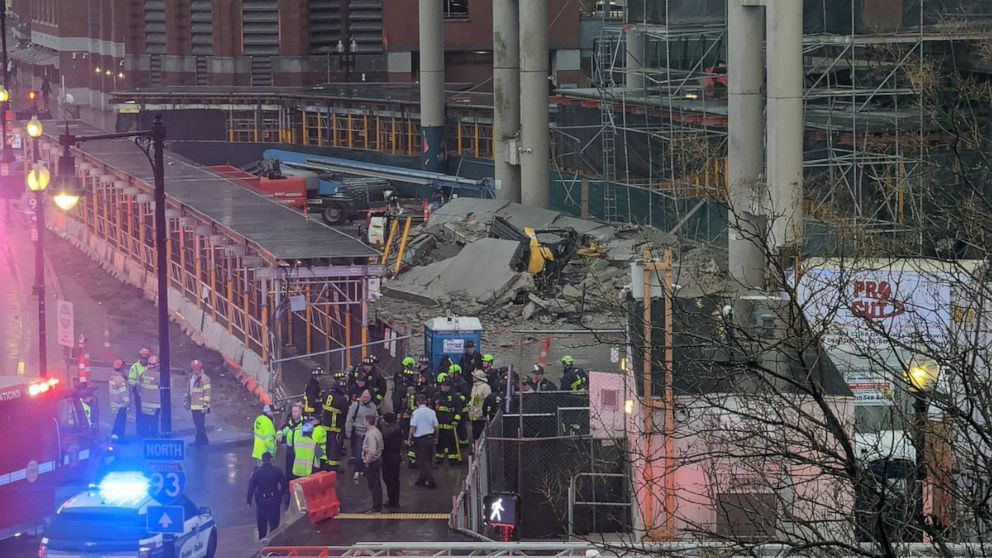 Officials say a portion of a downtown Boston parking garage that was being demolished has collapsed, killing a construction worker

BOSTON — A portion of a downtown Boston parking garage that was being demolished collapsed Saturday evening, killing a construction worker, officials said.

Boston Emergency Medical Services confirmed one person was killed and a second person was transported to an area hospital, WCVB-TV reported.

Part of the Government Center garage came down after a concrete slab on the ninth floor collapsed, construction firm John Moriarty & Associates said in a statement.

Boston Fire Commissioner Jack Dempsey told reporters that a worker who was completing demolition work in a construction vehicle fell over the side of the garage when the structure collapsed, falling a significant height.

The worker was found under a pile of rubble and pronounced dead at the scene by authorities, Dempsey said.

“This is a horrible tragedy and my heart goes out to the family and loved ones of the worker,” said Boston Mayor Michelle Wu.

The body has not been immediately recovered because Dempsey said firefighters are waiting until the Boston Inspection Services department determines the area can be safely entered.

“We’re not going to put anybody in there until it’s safe to do so,” Dempsey told reporters.

Suffolk County District Attorney Kevin Hayden told WCVB-TV that the person who died was a young man, but he did not identify him.

“Our heartfelt thoughts and condolences go out to the loved ones of the worker who lost his life,” John Moriarty & Associates said in a statement. “JMA remains committed to providing a safe and healthy workplace for all our employees and trade partners. We would like to thank the Boston Police Department and EMS for their swift response.”