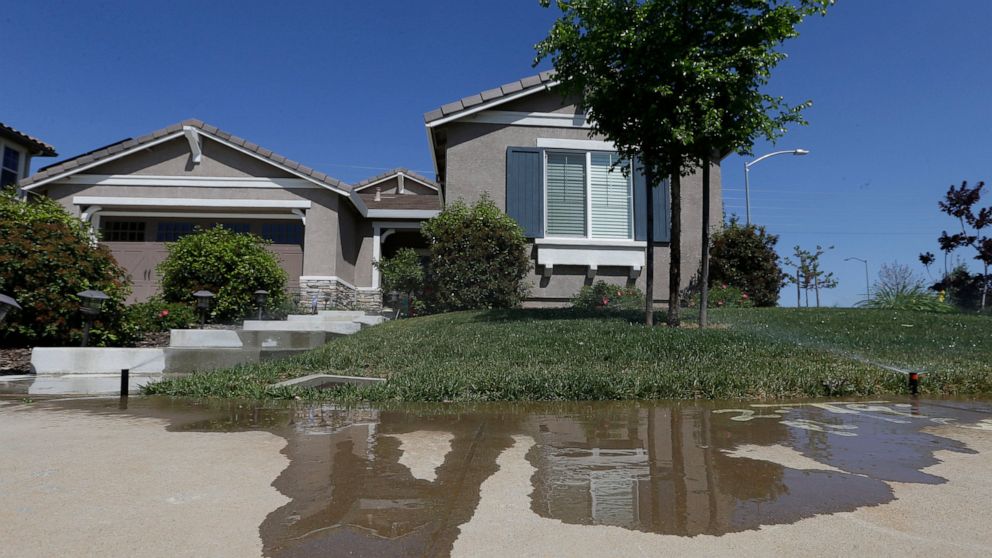 SACRAMENTO, Calif. — Californians will face mandatory restrictions governing how they can water their lawns and wash their cars for the second time in less than a decade as the state withers under another drought.

The rules adopted Tuesday by the State Water Resources Control Board are fairly mild — no watering lawns for 48 hours after a rainstorm or letting sprinklers run onto the sidewalk— and could take effect as soon as the end of the month. Scofflaws could face $500 daily fines, though regulators say they expect such fines will be rare, as they were in the last drought.

The action comes as Californians continue to fall short on Gov. Gavin Newsom’s call for a voluntary 15% reduction in water use compared to last year. Between July and November, the state’s water usage went down just 6%.

The new restrictions follow an extremely wet December that state officials warned may not continue during the winter months that normally are the state’s wettest. Weather patterns have become more unpredictable due to climate change and state climatologist Michael Anderson said forecasts show January, February and March could be drier than average.

Earlier forecasts didn’t predict such a wet December, which saw record amounts of rain and snow in many areas. In mid-December, about 80% of the state was in extreme or exceptional drought conditions. By the end of the month only about a third was experiencing those conditions, according to the U.S. Drought Monitor that tabulates conditions. Meanwhile, the state Department of Water Resources announced Tuesday that recent storms will allow the resumption of hydropower generation at the Oroville Dam, which was halted in early August due to historically low lake levels.

Despite the rain, significant parts of the state’s water system are still under stress from the extremely dry conditions earlier in 2021 that dropped many of California’s largest reservoirs to record and near-record lows.

“Conserving water and reducing water waste are critical and necessary habits for everyone to adopt as we adjust to these uncertainties and we build resilience to climate change, so adopting emergency regulations now just makes sense,” said Eric Oppenheimer, chief deputy director for the state water board. “We need to be prepared for continued drought.”

Regions north of the San Joaquin River, including Sacramento and San Francisco, used between 17% and 26% less water than November 2020, while Los Angeles, Orange and San Diego counties that account for 55% of the state’s population used nearly 1% more, according to state data.

Among the water uses that won’t be allowed under the new rules: outdoor watering that results in excessive runoff into the street and sidewalks; using water for landscaping and irrigation during the 48 hours after storms that bring at least .25 inches (.63 centimeters) of rain; washing cars with hoses lacking shut-off nozzles; using potable water to wash driveways, sidewalks, buildings and patios and for street cleaning or to fill decorative fountains or lakes.

There are some exceptions. For example, trees in street medians can be watered, while turf cannot. The rules take effect once an administrative review is completed.

Though much of the U.S. West is in drought, no other western state has adopted statewide restrictions on residential water usage. Instead, it’s local governments and water agencies in places like Denver and Las Vegas setting policies about when people can water their lawns. For example, the Las Vegas region adopted restrictions on planting grass, including banning it in front yards, in an effort to save water.

California adopted similar restrictions during the five-year drought that ended in 2017, and some cities and local water districts made them permanent. Such restrictions were just one piece of the state’s conservation approach, which also included incentives for Californians to rip up water-hungry lawns in favor of drought-resistant landscaping.

Today, California’s overall water use is lower than it was when the last drought began. But that makes conservation trickier this time, because some of the easiest measures have already been adopted. State water board officials were unable to say how many of California’s nearly 40 million people are under such rules or exactly how much water they expect to save.

Though the regulations include an ability to fine violators up to $500 per day, fines were rare last time around. The state has no plans to put “water cops” on the streets, Oppenheimer said, but he noted that during the last drought many local water districts beefed up staff to monitor conservation and compliance.

The state also has a website where individuals can report their neighbors or others they see violating the rules. The complaints will be directed to the relevant local water agency. During California’s last drought, people engaged in so-called “ drought shaming “, the process of publicly outing people who are wasting water by posting videos to social media.