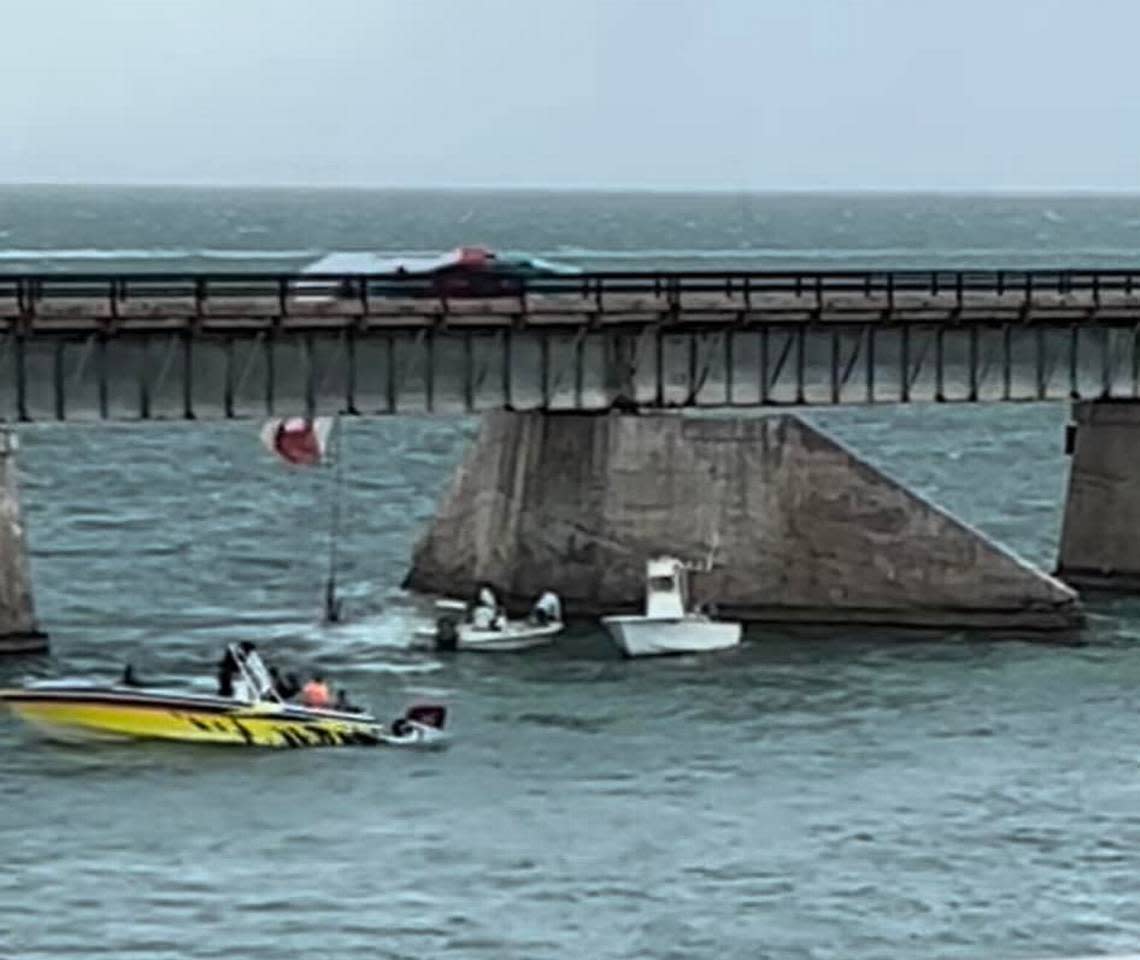 A parasailing cable tethering a young mother and two children to a boat was intentionally cut by the vessel’s captain on Memorial Day, plunging them into the water and dragging them across the surface before they hit a Florida Keys bridge, according to police investigating the case.

The 33-year-old woman from Schaumburg, Illinois, Supraja Alaparthi, was dead by the time a “good Samaritan” boat captain delivered her and the children to a restaurant in the Middle Keys city of Marathon, which police, Coast Guard crews and paramedics were using as a staging area for Monday’s tragedy.

According to the Florida Fish and Wildlife Conservation Commission’s initial incident report released Tuesday night, the captain, Daniel Couch, 49, cut the line tethered to the harness because the parasail “pegged” in a high gust of wind. That means the sail was so full of air that it risked dragging the boat.

One law enforcement source said Couch likely cut the line hoping to catch Alaparthi and the two children on the way down.

READ MORE: Is parasailing regulated in Florida? The popular water sport has led to tragedy before

But Mark McCulloh, 66, chairman of the Florida-based Parasail Safety Council who pioneered parasailing in the 1970s, said the captain should have known other tactics, like steering the boat side to side, which would have deflated the parasail.

“He never should have done that,” McCulloh said. “That’s the golden rule. Do not cut the line.”

Couch could not be immediately reached for comment. The company that operates the parasailing boat is Lighthouse Parasail, based in Marathon and the Outer Banks of North Carolina. Reached by phone Tuesday, co-owner Jacquelin Winter said she could not comment on the accident.

John Callion, 33, a Marathon tarpon guide, saw the tragedy unfold from his boat and sprung into action to try to save the family, according to the Monroe County Sheriff’s Office 911 call log.

READ MORE: Boat hits a pole in Florida Keys and ejects 7 people into the water, killing one of them

Callion told the Miami Herald/FLKeysNews.com that the weather around 5 p.m., right before the crash, was calm, but that a storm was approaching.

“It was pretty much flat calm, but you could see the storm coming. All of the sudden, the temperature dropped by 10 degrees and the wind started blowing like crazy,” Callion said.

He then saw the cable snap and Alaparthi and the children drop into the water, with the wind propelling the parasail, basically a giant parachute, dragging them across the surface.

Callion estimates they traveled a mile or two before they hit the Old Seven Mile Bridge, a decommissioned span that runs parallel to the current bridge that opened in 1982. The old bridge connects Knights Key in the Middle Keys city of Marathon with Little Duck Key in the Lower Keys.

Callion, who has been a charter fishing guide for 15 years, didn’t see the mom and kids hitting the bridge because he raced his 25-foot boat after them as soon as he saw them fall into the water. He had to motor around Pigeon Key, a small island just off the base of the north side to the bridge, to get to the victims.

When he arrived at their location, he and his two passengers brought Alaparthi and the children aboard the boat. One child, Sriakshith Alaparthi, her 10-year-old son, was battered but conscious. The other child, Alaparthi’s 9-year-old nephew, Vishant Sadda, was unconscious and wrapped in the parasail’s lines, Callion said.

“It was pretty much the worst thing you could imagine,” he said. “It was real bad.”

Callion had to cut the harness to free the three from the chute, which was hung up on the old bridge.

He and his passengers began CPR on the child and the mother, but the woman had no pulse, Callion said.

Monroe County sheriff’s deputies were on the bridge, apparently for another incident, and witnessed him getting the people into his boat. They yelled down from the bridge to get the people to the Sunset Grill, an oceanfront restaurant at the base of the bridge.

“From there, we handed them off to the authorities,” Callion said.

Once the woman and children were at Sunset Grill, a Florida Fish and Wildlife Conservation Commission officer began chest compressions on the woman aboard Callion’s boat, Sgt. Deborah Johnson of the Keys sheriff’s office said in her incident report. Johnson hopped on board to assist the state officer with CPR.

After paramedics arrived, Johnson then turned her attention to the seriously injured little boy, who was going in and out of consciousness.

“I laid on my stomach and tried to have [him] look me in the eye to keep him awake,” Johnson said.

The boy had injuries to his left eye, arms, legs and torso, according to Johnson. The sheriff’s sergeant said she then noticed paramedics stopped their life-saving efforts on the woman and focused on the boy.

The children were taken to Fishermen’s Hospital in Marathon, where the younger boy was listed in critical condition and doctors determined he should be flown to Nicklaus Children’s Hospital near South Miami. But the weather was so bad that Monroe County’s TraumaStar medical helicopter was not able to take off until nearly 10 p.m., according to the sheriff’s log. The chopper arrived at the hospital shortly after 10:30 p.m.

The woman’s husband and other relatives then arrived at the restaurant. According to Johnson, he was “adamant” that he be allowed to see his wife. “I explained to him, best I could, nobody could go in or around her until the medical examiner gave authorization,” Johnson said.

The incident is being investigated by both the Florida Fish and Wildlife Conservation Commission and the Coast Guard.

According to the National Weather Service in Key West, a cluster of scattered showers and isolated thunderstorms pushed off the mainland early Monday afternoon.

The cool outflow winds from those storms reached the Middle Keys after 4 p.m., said Jonathan Rizzo, National Weather Service Key West’s warning coordinator meteorologist. That led to wind gusts in the area up to 28 knots, or about 32 mph, he said.

Dear Mar-a-Lago Club members: This FBI raid is going to cost you

Why is The Villages known as ‘the STD capital of America?’

After record heat this summer, agency declares droughts in much of Britain

Saudi Arabia says wanted man blows himself up during arrest

Police arrest man accused of shooting inside Mall of America