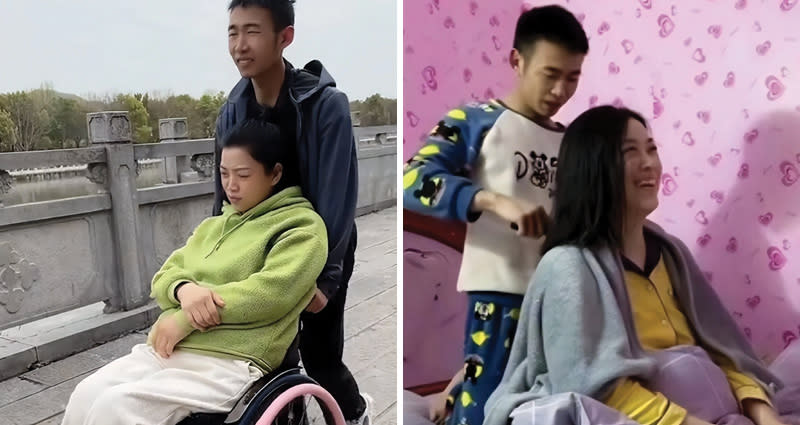 A 34-year-old Chinese woman who suffered a harrowing series of life events, including child loss, divorce and paralysis, has found love with her best friend’s son.

The two became close friends, and after Yin gave birth to her second child, Huang helped her care for her newborn daughter.

In 2016, Yin was hit by a falling tree branch and became paralyzed from the waist down. Shortly after her accident, Yin’s husband asked for a divorce that was finalized three years later when he took custody of their daughter.

In light of her single status, Huang suggested that Yin go on a date with her now-30-year-old son, Zhao Yingfeng. Huang reportedly believed that their personalities would balance with Yin’s extraversion and Zhao’s introversion.

Yin explained to the Morning Post that she initially believed that Zhao would not be interested in her as a result of her day-to-day struggles. Zhao, however, expressed his relentless support for Yin.

“I’m incontinent, I could stain my sheets and pants at any time, and I might not be able to have children in the future. Are you OK with that?” Yin recalled asking Zhao. He responded, saying, “It’s not a big deal.”

Yin suffered another accident in 2021 when she fell from her wheelchair, breaking several bones. While bedridden, Zhao took care of Yin’s daily needs such as cutting her nails and bathing her. She describes this as the moment when she realized that she envisioned Zhao as her “future husband.”

“It was then that I really accepted him as my future husband in my heart,” Yin said.

The couple got married in October 2021 and are now expecting their first child in two months.

“He once told me: ‘If there are only two of us in this life, I am willing to take care of you until we are both old, and I am a few years younger than you, so I can still carry you then,’” Yin said.

‘Only by understanding history can we grasp the way forward’: China marks 84th anniversary of Nanking Massacre

CEO Dong Mingzhu, one of the richest women in China, may be replaced by her 22-year-old secretary