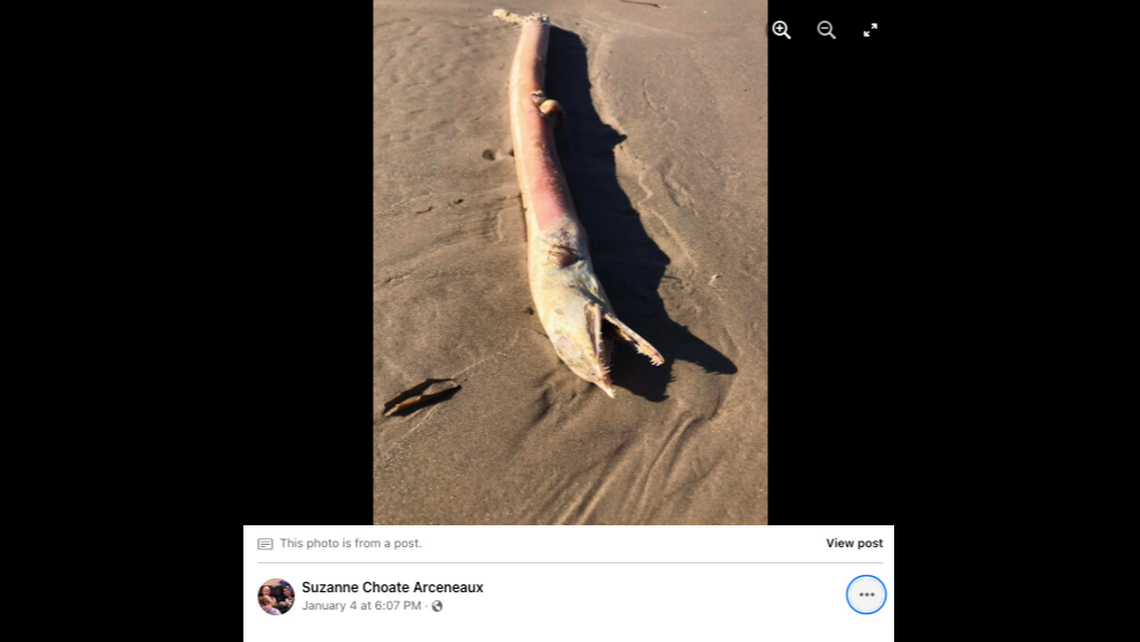 It’s not a sandworm from “Tremors” or “Beetlejuice” found washed up along a Texas shore, but rather a real fish with some creepy characteristics.

Suzanne Choate Arceneaux shared photos of the sea creature on the Facebook group Bolivar Beachcombers, used by beach visitors at Galveston Bay to share their findings.

“Was walking the beach today and noticed a lot of dead things, seagulls, pelicans, stingray, a ton of jelly fish,” she said in the Jan. 9 post. “I did find a strange fish. Can someone tell me what it is??”

Dozens of people have commented on her post, including many who wish to stay away from this particular fish.

“That’s a fish straight outta the depths from hell,” one commenter said.

“That’s a ‘hell naw’ fish if I’ve ever seen one,” another woman joked.

Others said it resembled the sandworm creatures from the “Beetlejuice” and “Tremors” movies.

But some — correctly — said the fish is an eel of some type.

Mark Fisher, the Coastal Fisheries Science Director for the Texas Parks and Wildlife Department, told the San Antonio Express-News the fish is a snapper eel. The creature is “somewhat common” in Galveston Bay, Fisher said.

While they may be common, Arceneaux was told snapper eels “usually don’t end up washed up on shore,” according to KSAT.

Texas A&M University at Galveston describes snapper eels as having cylindrical body types that can grow to 6 feet in length. The teeth of snapper eels are called “canine-like.”

Snapper eels are found from the Gulf of Mexico to Brazil, according to the Smithsonian Tropical Research Institute.

Dark, slithering creature seen by boat captain near NC coast stirs debate. What is it?

Shark bites unsuspecting surfer sitting on his board in Texas Gulf. ‘He was lucky’