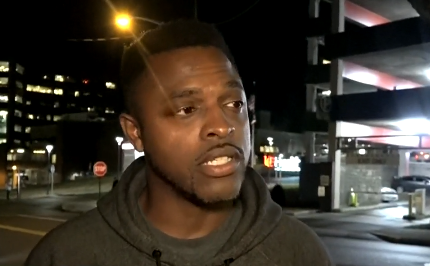 Damar Hamlin‘s uncle says the Buffalo Bills player has lung damage and can’t breathe on his own after he collapsed on the field Monday night during a game against the Cincinnati Bengals.

The player was receiving 100% oxygen from a ventilator but that is now down to 50%, Dorrian Glenn said Tuesday night.

Glenn said Hamlin’s heart stopped twice — once on the field when they resuscitated him and again at the hospital, “and they had to hit him with the defibrillator.”

“People who don’t even know us are showing love and support and we’re so thankful for that,” Glenn said. “I know those prayers are helping because he’s definitely recovering … God got a mission for him and that’s why he’s still here.”

The Bills said Wednesday that Hamlin remained in critical condition. He showed “signs of improvement” Tuesday and overnight, but was “expected to remain under intensive care as his health care team continues to monitor and treat him,” the Bills said.

Glenn was watching the Bills-Bengals game with family members in Pittsburgh when he saw his nephew collapse.

“We went from trying to console his little brother, to the whole living room was crying. We were all in tears,” Glenn said.

On the field, medical personnel quickly began CPR, before taking Hamlin to the hospital.

“If not for what they did, my nephew would be dead right now,” he added.

The Bills said Hamlin suffered cardiac arrest. He remains in the intensive care unit at the University of Cincinnati Medical Center.

Around Cincinnati on Tuesday, fans gathered for the 24-year-old. A vigil outside the hospital took a moment of silence at 8:55 p.m. — the time Hamlin collapsed on Monday.

Rep. Byron Donalds on the House speaker’s race and why he took on Kevin McCarthy