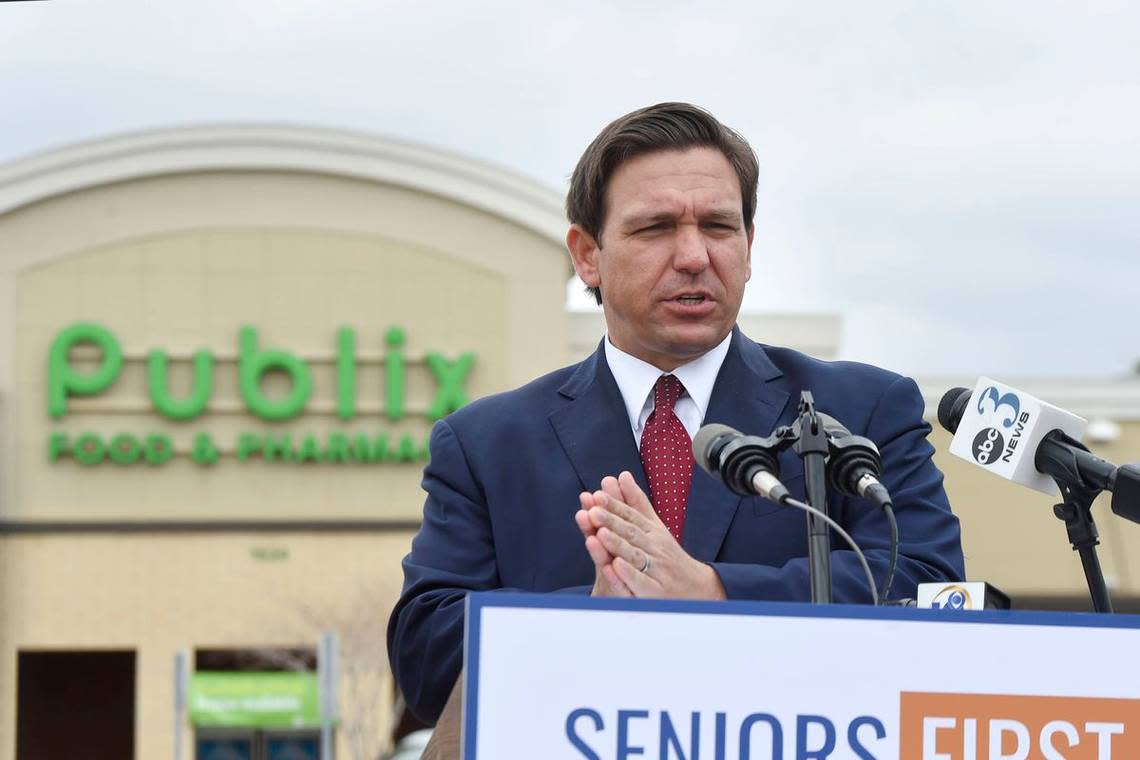 Meanwhile, in the blue-sky parallel universe accessible only to the mind of Gov. Ron DeSantis, the state’s distribution networks are humming along like well-oiled machines. The only problem is a shortage of vaccines.

Space limitations prevent recapping all the governor’s boasting, bungles and deceptions since the pandemic began. Now that his hero Donald Trump is out of office, there’s nobody at the White House to give DeSantis cover when he equivocates.

The result is a daily display of doubletalk that would be comical if so many lives and jobs weren’t at stake. The governor never had a master plan for getting out the vaccine, but he’s determined to ignore and discredit Joe Biden’s.

As soon as the new administration began discussing the use of FEMA to set up mass inoculation sites, DeSantis curtly blew off the idea, saying we don’t need federal help in Florida; just send more vaccines!

A White House spokesman responded with interesting supply statistics that DeSantis had either overlooked, or hidden from the public — the state had administered only about half of the 3.1 million doses it had been sent.

Snap! Trump would never have burned the governor so bluntly, and with actual facts.

DeSantis then commenced to pivot like a palm rat on a hot roof, claiming the state has been withholding all that vaccine for use as second doses — a 180-degree flip from three weeks earlier, when he’d threatened to cut off hospitals for doing the same thing.

One number that DeSantis hasn’t been able to hide is Florida’s toll of COVID-related deaths, which after only a year is approaching 26,000. Who knows how many of those people wouldn’t have gotten infected if DeSantis had been courageous enough to impose a statewide mask mandate ahead of the deadly and predictable surges.

Now, while older Floridians from the Panhandle to the Keys desperately scramble to line up their first shots, DeSantis labors to appear competent by holding media conferences at various Publix, where grandstanding is a pleasure.

The governor’s nightmare is that Biden will overshadow him by dramatically accelerating the local pace of vaccinations, something that pouty Trump never tried to do during his final days.

DeSantis was there proudly declaring that the man was the one millionth Florida senior to get a shot in the arm. Big surprise: It wasn’t true.

The governor’s own health department had just published data showing that fewer than 840,000 residents 65 or older had gotten their first vaccinations. On a positive note, DeSantis embellished the truth by only 20 percent that time, so maybe he’s getting better.

Partnering with Publix pharmacies isn’t a bad thing, as long as it doesn’t hinder rural communities from receiving shipments of vaccines. But that’s what DeSantis is doing in Palm Beach County, a move that has surprised — and angered — many officials there.

He abruptly decided that 67 Publix stores would be the only source of vaccine for the county’s 1.5 million residents, bypassing not only the health department but minority farm communities with no nearby Publix and many elderly folks who don’t drive.

The mayors of Belle Glade, Pahokee and South Bay immediately wrote to DeSantis, urging him to reconsider his “unconscionable” decision. On Friday, the state decided to give some of the vaccines to two Palm Beach County health agencies to distribute them in areas not served by Publix.

It would be cynical to think DeSantis chose Publix because the company gave $100,000 to the Friends of Ron DeSantis political action committee last month. It would also be naïve to think the idea never entered his brain.

Regardless, the governor is morally obligated to reveal exactly how many doses of vaccine have been stockpiled, and where (and when) he plans to distribute them. Don’t hold your breath.

It took weeks of chaotic online bottlenecks for the DeSantis administration to announce that it’s finally creating a statewide website where seniors will be able to put their names on an actual waiting list for inoculation.

By the way, about those FEMA sites that DeSantis claims Florida doesn’t need — can we please take a vote on that?