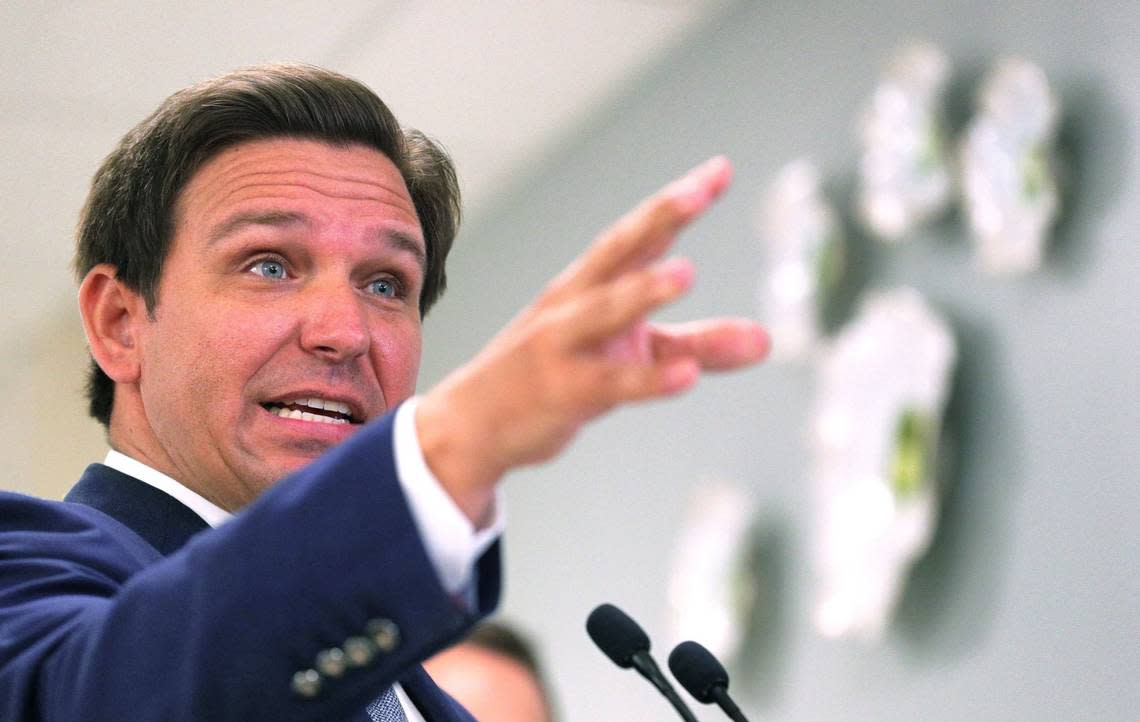 Gov. Ron DeSantis used his veto pen sparingly before signing off on a record $100 billion state spending plan for Florida on Wednesday.

In a sign of the state’s rebounding economy and his pleasure with the state lawmakers who delivered on a number of his legislative priorities this year, DeSantis cut just $54 million in local projects they requested from the state budget for the next fiscal year.

The light touch comes a year after DeSantis vetoed about $1 billion, mostly in local projects, as the state was bracing for the economic fallout from the coronavirus pandemic.

And it largely leaves intact the billions of dollars lawmakers allocated in the budget for the environment, sea level rise, schools and raises for state employees — nearly $8 billion higher than the budget they passed the year before. Much of the additional money this year is coming from the federal government through multiple federal bailout plans.

“I think the budget really reflects a state government that’s meeting the core concerns of Floridians,” DeSantis said moments before signing the budget into law during a news conference in New Smyrna Beach on Wednesday.

The budget was passed almost unanimously in the Legislature in April, and DeSantis’ vetoes were so sparing that it won praise from unlikely corners.

The Florida Education Association, which represents the state’s K-12 teachers and often clashes with the Legislature and governor, commended the budget “as a victory for public education — with caveats.”

In South Florida, DeSantis cut $500,000 to help build a pedestrian bridge across Collins Avenue at 180th Street in Sunny Isles Beach, a town plagued by traffic crashes, including some that have been fatal. Tampa Bay-area projects were mostly spared. The governor vetoed just about $9 million in regional projects, although some, including an effort to make Tampa’s Lois Avenue safer for pedestrians and bikers, got the axe for the second year in a row.

Sen. Jason Pizzo, D-North Miami Beach, who requested the funding, said it’s “hard to rationalize some of these cuts, when many have to do with critical infrastructure or resident safety.”

Among the cuts were three spending projects for LGBTQ Floridians totaling $900,000, including $150,000 in mental health services for survivors of the 2016 Pulse nightclub massacre in Orlando.

Democratic lawmakers noted that the vetoes came a day after DeSantis signed into law a bill preventing transgender females from participating in women’s and girls’ scholastic sports. Tuesday, coincidentally, was the first day of LGBTQ Pride Month.

“@GovRonDeSantis uses the 2nd day of #Pride2021 to add insult to our injury,” state Rep. Carlos Guillermo Smith, D-Orlando, said in a tweet.

Few vetoes, but one large one

Although DeSantis vetoed about $1.5 billion, only $54 million was in local member projects, a reflection of the governor getting largely what he wanted from state lawmakers during this year’s legislative session.

The Republican-controlled Legislature delivered on several of the governor’s priorities that appeal to the party’s base ahead of DeSantis’ bid for reelection next year.

Despite intense opposition from Democrats and a few Republicans, GOP legislators passed the ban on transgender athletes, a controversial series of voting reforms, a crackdown on social media companies and a measure that further penalizes people who participate in “riots.”

And after lawmakers passed the budget, they came back to Tallahassee in May to pass DeSantis’ new gambling agreement with the Seminole Tribe, which permits sports betting and nets the state an estimated $500 million per year in new revenue.

The governor’s office lobbied House Democrats to support the 30-year gaming compact. Although lawmakers had already passed the budget, it had not yet reached the governor’s desk, and Democrats were aware that the governor still had leverage over their local projects.

“Anyone who’s been in this process for any amount of time knows your budget line items aren’t safe until the governor puts pen to paper,” House Democratic co-leader Evan Jenne, D-Dania Beach, told reporters at the time.

Most Democrats ended up voting to approve the deal. The House approved it on a 97-17 vote, and the Senate voted it out on a 38-1 vote, with Republican Sen. Jeff Brandes, of St. Petersburg, as the lone no vote.

By far the largest veto was $1 billion for a new emergency fund requested by DeSantis earlier this year.

State lawmakers allocated federal relief money to the new fund, which could be used by the governor in an emergency. But DeSantis said that after he proposed the idea, the federal government issued guidance stating that the relief money can’t be used to meet future needs.

To spend the money, the state also would have to issue competitive bids, something DeSantis said was unrealistic in an emergency.

“In an emergency situation, you don’t have the time to do normal procurement,” DeSantis said. “We were going to run into risk of having the feds come after us for it.”

That money will now be spent on other pandemic-related expenses, DeSantis said, and he’ll approach the Legislature next year about paying for a new emergency response fund.

But housing advocates have long complained that governors and legislative leaders have undercut efforts to address Florida’s affordable housing crisis by sweeping the unused balance in the affordable housing trust fund for subsequent years, making it more difficult for contracts that take more than one year to complete to get underway.

The governor also removed $26 million from the Triumph Gulf Coast trust fund, money set aside from the damages paid to the state as a result of the Deepwater Horizon oil spill in the Gulf in 2010. There was also $10 million removed from the highway safety trust fund and $17 million swept from the transportation trust fund.

Education was boosted, thanks to Congress

The Republican-led Legislature faced an education financial crunch at the start of the 2021 session in March. Lawmakers were considering budget cuts to the K-12 system and briefly mulled raising tuition at Florida’s public universities.

The financial outlook for the state’s education system changed after President Joe Biden signed a $1.9 trillion stimulus package that included about $122 billion for states to spend on education.

By April, legislators were having trouble figuring out what to do with about $7 billion in federal aid for education; it briefly led to an impasse in budget negotiations.

The rest of the federal aid — $6.8 billion — was placed in state reserves and will be released to the Florida Department of Education when it submits detailed plans for the funds that are meant to help schools safely reopen and support students who have experienced academic losses during the pandemic.

DeSantis barely mentioned the Biden administration’s stimulus package and how it buoyed some of the key parts of the state’s education budget. He mostly focused on how the Legislature avoided cuts to the K-12 system and that he was the one who asked lawmakers to pay bonuses to teachers and principals.

“It was a crass example of freeloading off the hard work of others he doesn’t want to acknowledge because he doesn’t agree with their politics,” the Florida Senate Democratic Caucus said in a statement. “Shame on the governor.”