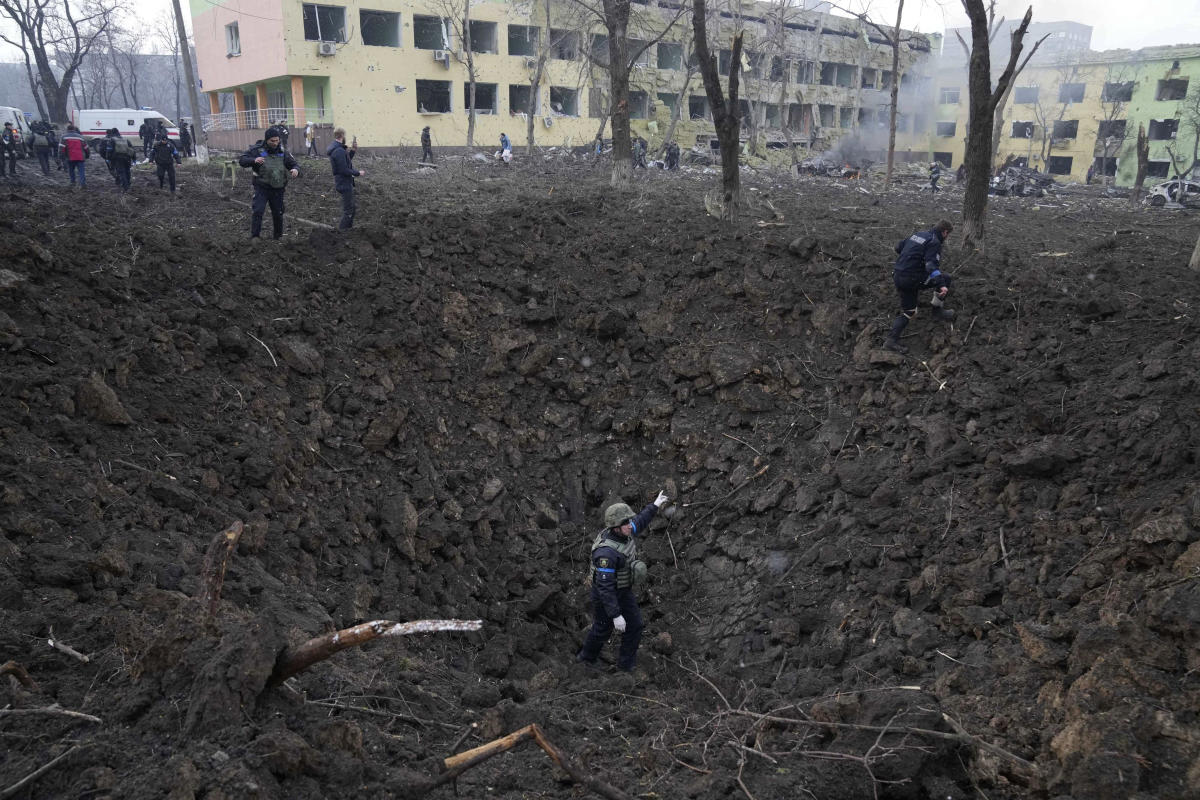 LVIV, Ukraine (AP) — A woman on the verge of giving birth with her leg flayed open by shrapnel. A shockwave that shattered the glass and ceramic lining of a room with medical waste. A nurse who suffered a concussion.

This is what the Ukrainian doctors remember of the Russian airstrike that destroyed the Mariupol maternity hospital where they once worked. And these memories are now all they have from a day they wish they could forget: Russian soldiers purged the evidence from their phones when they fled Mariupol.

“With just one blow, there was simply nothing, no children’s clinic, it was simply blown away, ” said Dr. Lyudmila Mykhailenko, the acting director at Hospital No. 3 in the besieged Ukrainian city of Mariupol. The sprawling courtyard of the hospital complex was — and remains — “one continuous shell crater.”

Three doctors and a paramedic spoke with The Associated Press to offer new details from a March 9 airstrike that happened when communications were all but severed, and to counter fresh Russian misinformation. They left the city separately in private cars, as have thousands from Mariupol in recent weeks, and are now scattered in other towns around Ukraine and in Poland.

Their testimony, along with AP reporting, AP footage from the scene and interviews with munitions experts who analyzed the size of the shell crater, directly contradicts Russian claims that there was no airstrike. Russian officials have repeatedly tried to sow doubt about atrocities in Mariupol, the shattered city in eastern Ukraine that is a key Russian military objective. In particular, Russia has made great efforts to falsely blame the death and destruction in the city on Ukrainian shelling.

Two of the three doctors, like most who passed through Russian checkpoints on the way out of Mariupol, said their cell phones were searched and videos and photos of the city were deleted. People with what was considered suspect imagery or who lacked documents were separated out, but it’s not clear what ultimately happened to them.

“I had lists on my phone, I had photos, I had everything, but we were strongly told to delete all of this,” said Mykhailenko, who spoke for two hours with hardly any interruptions with a fierce determination to describe the attack and her narrow escape. “The trash bin was deleted. … We had dashcam footage of everything that was going on in the city, but they made us delete that as well.”

Most recently, a Russian government-linked Twitter account shared an interview last week with Mariana Vishegirskaya, one of the women in the maternity hospital. Vishegirskaya, wearing polka dot pajamas and looking dazed, emerged almost unscathed from the hospital airstrike.

In the latest interview, the new mother said the hospital was not hit by an airstrike last month. She described the explosions as a pair of shells that struck nearby, saying she heard no airplanes. She left vague who could be responsible.

She said fellow survivors from the basement agreed when they discussed it in the moments afterward.

“They did not hear it either. They said that it was a shell that flew in from somewhere else. That is, it did not come from the sky,” she said in the interview.

Vishegirskaya is now in Russia-controlled territory, but it’s not clear exactly where or under what conditions the interview was filmed.

However, a team of Associated Press journalists working on the ground in Mariupol nearby documented the sound of the plane, then the twin explosions. One of the explosions blasted a crater more than two stories deep in the courtyard — consistent with an airstrike using a 500-kilogram bomb and considerably stronger than artillery crossfire, according to two munitions experts consulted by The Associated Press.

Joseph Bermudez, an imagery analyst with the Center for Strategic and International Studies, said the size of the hole and the visible effects of impact on the surrounding buildings leave no doubt it was an airstrike.

The attack on the Mariupol hospital was one of at least 37 Russian strikes on medical facilities across Ukraine recorded by The Associated Press. Over the course of the war, every hospital in the city has been struck at least once by shells or airstrikes — the first was just four days after fighting began. Mariupol Mayor Vadym Boichenko said Wednesday that 50 people had burned to death in Russian strikes on hospitals in the city.

Before the attack, it was a relatively quiet day at the Mariupol hospital.

Dr. Yana Frantsusova was sorting medical waste in a room in another building at the hospital compound when the tiles and glass around her shattered. It was about 2:45 p.m. She started to run, but the shockwave slammed the door shut in her face.

“I ran out with difficulty, and all of us, all people from my department, all the nurses, doctors who were there, everyone was already on the floor,” she said. “Then another explosion occurred.”

Frantsusova had survived an airstrike once already, on a house near hers, and this felt the same — an intense shockwave followed by utter destruction. She and her team of medics got up from the floor to take in the injured and those able to walk.

Among the pregnant women in the gravest danger, “one was already giving birth, at the moment when she was brought to us,” she said. Another had an open wound to her thigh. A third was in a state of shellshock, with shrapnel gashes in both legs.

The AP journalists filmed two large plumes of smoke in the distance in the direction of the airstrike. It then took them about 25 minutes to arrive at the scene.

By then, it was chaos. Paramedics raced up the stairs to bring down anyone who couldn’t make it on their own feet. Children and expectant fathers stumbled out the doors to an apocalyptic scene of blackened trees, smoldering earth and a crater big enough to swallow a truck.

Vishegirskaya was already outside, hugging a blanket around her shoulders. When an AP journalist with a camera asked how she was, she answered “Fine,” then went off to try and retrieve her belongings from the hospital. In the interview with Russian media, she falsely said she told AP journalists she did not want to be filmed.

Sergei Chernobrivets, a paramedic who was on the scene that day, described the injuries to multiple women. He said he wasn’t in a position to determine the source of the explosions, but he confirmed the extensive damage to the hospital compound.

Dr. Yulia Kucheruk, one of the maternity ward’s physicians, said a nurse suffered a concussion and another medical worker was shellshocked. There was no point staying behind to try and retrieve usable medical supplies, she added, because “it was all trashed, in chaos.” Kucheruk spoke only briefly about a day that remains painful to revisit.

Several women were transferred to another hospital, including Vishegirskaya and a woman with a fractured pelvis who died along with her unborn child the same day. Vishegirskaya gave birth the next day to a girl.

By then, the Russian misinformation campaign was in full swing. The country’s embassy in the United Kingdom shared the AP’s photos of Vishegirskaya and another woman wounded on a stretcher, placing the word “FAKE” over the images and claiming that Vishegirskaya had posed in both in “realistic makeup.” The misinformation was repeated by Russian ambassadors in other parts of the world.

Russia blames Ukrainian shelling for attacks on hospitals, including the one on the maternity ward in Mariupol, although their story of the violence that day has shifted over time.

Twisting the truth about war crimes is a deliberate Russian tactic, Ukrainian President Volodymyr Zelenskyy said in his nightly address on Monday, just three days after Vishegirskaya’s interview was released in Russian media.

“They have already launched a campaign of fakes to hide their guilt of mass killing of civilians in Mariupol,” he said.

The hospital was struck again on March 17, and four or five of the patients lining the corridors were killed, Mykhailenko said. With no one to fetch the bodies, they were buried on the hospital grounds.

Days later, in despair and with a leg ailment increasingly making it hard for her to run from shelling, she and her family packed up what little they had left and piled into the car.

At the first checkpoint, her phone was wiped. At the second, their belongings were searched and their sole knife was seized. They picked their way through a minefield where a car had blown up the previous day. More than two weeks later, they made it to safety in Poland.

On March 24, Kucheruk also drove out and headed for western Ukraine. She passed through 20 Russian checkpoints, including one where her cell phone was searched and its contents deleted.

Now the bulk of Mariupol’s doctors have fled, and the city is left without a single fully functioning hospital. They have lost the lives and the careers that they had built, and can only hope against hope to one day return to their destroyed city.