Home World Elderly Asian Woman Fights Back After Man Punches Her in the Face... 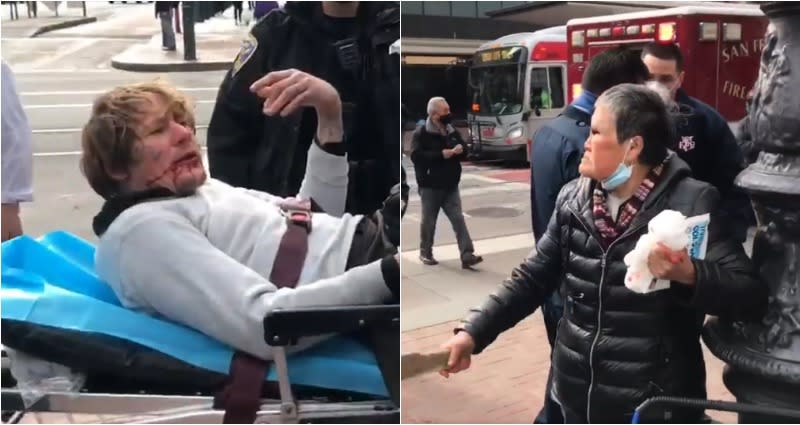 A 76-year-old Asian woman reportedly beat up a man who assaulted her in another unprovoked attack in San Francisco, witnesses said. Xiao Zhen Xie was leaning by a light pole while waiting at the traffic light around Market Street in San Francisco when a 39-year-old man approached her and punched her in the face without provocation, according to KPIX.

“Very traumatized, very scared and this eye is still bleeding,” Xie said with the translation help of her daughter, Dong-Mei Li. “The right eye still cannot see anything and still bleeding and we have something to absorb the bleeding.” Even though she was injured, Xie fought back against the attacker by grabbing a stick and hitting him with it. The woman suffered injuries to her eye and the side of her face while the man was left bloodied. In a video following the attack, Xie can be seen holding the stick she used to fight back in one hand and an ice bag in the other. “You bum, why did you hit me?” the woman said in Chinese, reported USA Today. Dennis O’Donnell, a Sports Director for KPIX, stumbled into the scene during his morning run and saw the man handcuffed to a stretcher with Xie furiously screaming at him.

“The woman said that she was hit,” O’Donnell said. “She attacked back. From what I could see, she wanted more of the guy on the stretcher and the police were holding her back.” Xie and the unidentified attacker were transferred to the hospital for treatment. “As you can see she is extremely terrified,” John Chen, Xie’s grandson, said. “She’s terrified to even step out.” Chen and their family set up a GoFundMe campaign to help Xie with her medical expenses. Xie is also a cancer survivor and has had diabetes for over 10 years, according to the page. “I am amazed by her bravery,” Chen said of his grandmother in the GoFundMe campaign. “She was the one that defended herself from this unprovoked attack. But she is now suffering two serious black eyes and one that is bleeding unstoppably. Her wrist has also swelled up. She has been severely affected mentally, physically, and emotionally. She also stated that she is afraid to step out of her home from now on. This traumatic event has left her with PTSD.” During the investigation, authorities discovered the man attacked another elderly in the area — an 83-year-old Asian man. Police are now determining if the victims’ race was a factor in the two attacks. Do you have a hate incident to report? Help us document the recent rise in hate crimes against Asian Americans by going to STOP AAPI HATE to report an incident. Please stay safe out there. Feature Image via @DennisKPIX