Home World Election results: The story of the night so far… 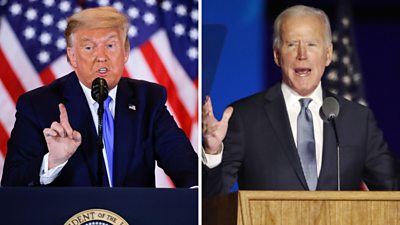 We still don’t know who’s won the presidential race – although President Trump made an unfounded claim that it was him.

In reality, many millions of votes remain uncounted and in his speech, Joe Biden said the count should go on until they are.

It was a dramatic end to an election night like no other. Here’s how the BBC’s election programme covered it.

Biden told this immigrant rights activist ‘vote for Trump’ in a blunt exchange. He voted for Biden but is ready to push him hard...