March 1 (UPI) — Human rights organizations and Ukrainian officials have accused Russian forces of using so-called vacuum bombs on Ukrainian targets, weapons that are particularly brutal and deadly and could constitute a war crime.

Ukrainian Ambassador to the United States Oksana Markarova told reporters Monday that Russia used the weapon against a Ukrainian army base in the town of Okhtyrka.

“The devastation that Russia is trying to inflict on Ukraine is large,” she said.

The White House declined to confirm Russia’s use of such weapons against Ukraine on Monday.

“I don’t have any confirmation of that,” White House press secretary Jen Psaki said. “We have seen the reports. If that were true, it would potentially be a war crime.”

But what exactly are vacuum bombs and what makes them so uniquely deadly?

Vacuum bombs are known by a few names, including thermobaric or aerosol bombs, or fuel air explosive. According to Human Rights Watch, such weapons are more powerful than other explosives of comparable size.

The way in which they detonate and inflict damage and injuries is also “particularly brutal,” the organization said.

The bombs comprise a container of fuel and two different explosive charges. The first charge opens the container and disperses the fuel in a cloud, which mixes with the surrounding air.

The cloud of fuel spreads before the second charge detonates, creating a powerful, high-temperature blast wave by way of the fuel cloud.

A 1993 study conducted by the U.S. Defense Intelligence Agency said the effects of a vacuum bomb on humans are “unique and unpleasant.”

Those who happen to be near the detonation point of the bomb are “obliterated,” according to the CIA in a separate study.

“Those at the fringe are likely to suffer many internal, and thus invisible, injuries, including burst eardrums and crushed inner ear organs, severe concussions, ruptured lungs and internal organs and possibly blindness,” the CIA study said.

Because the shock wave causes minimal brain damage to those who aren’t instantaneously killed, victims are often conscious and suffer for a time as they suffocate, the Defense Intelligence Agency said.

BBC News reports there are no international laws specifically banning the use of vacuum bombs, but if Russia is proven to have used them against Ukraine, the country could be tried for war crimes in the International Criminal Court. 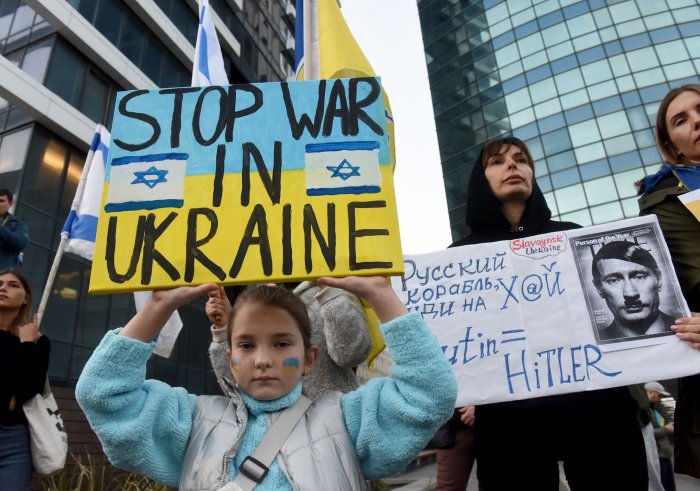 Demonstrators hold signs and flags during a protest February 26 in Tel Aviv, Israel, in support of Ukraine after the Russian invasion and massive military operation. Photo by Debbie Hill/UPI | License Photo