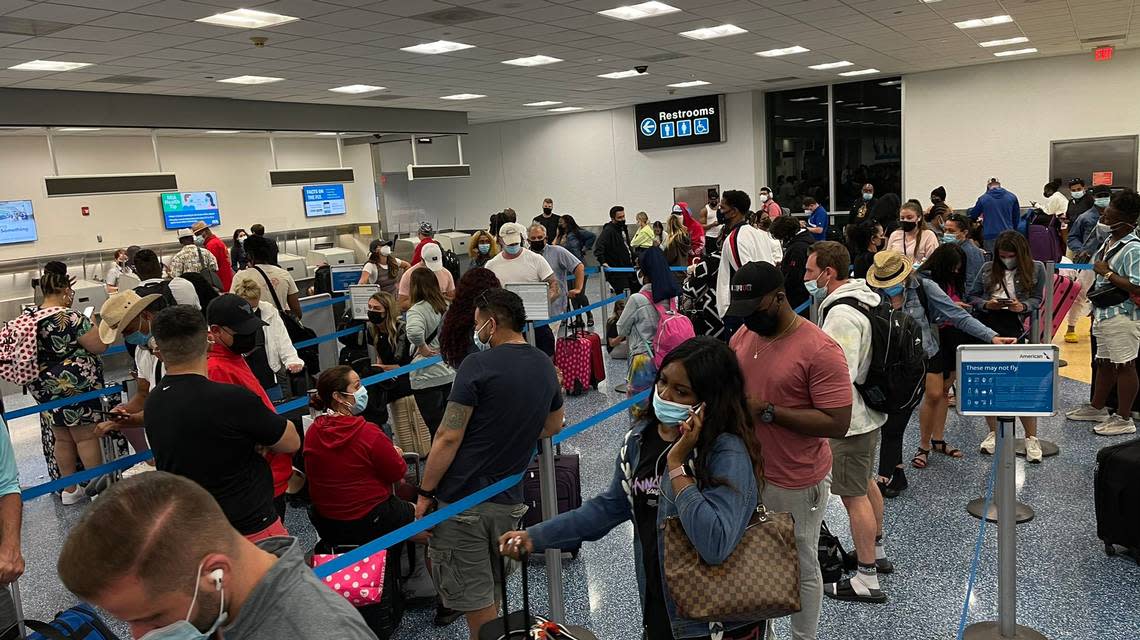 Thousands of desperate passengers have been left stranded at Miami International Airport after their flights were canceled because of stormy weather, airport officials say.

The mass cancellations on a stormy Sunday led to scores of furious fliers having no access to hotel rooms or rental cars, with some flights unavailable for days, passengers say.

They noted that social distancing at the airport is “impossible.”

“Stuck in the Miami Airport & all flights are canceled in the whole state,” Lauren Chamblin posted on Twitter. “All flights, buses, rental cars, etc are booked until Wednesday to get back to Atlanta. Been waiting in the line to re-book for 3 hours in a line with 2K+ others.”

Echoed another passenger, Stephen Daniel: “Delta delayed our flight several times until they finally canceled and have no flights until Wednesday out of [MIA].”

Miami airport spokesman Gregory Chin confirmed that 142 flights were canceled and 70 were delayed due to severe thunderstorms in Central and South Florida since noon Sunday. The airlines affected include American, Delta, Frontier, JetBlue, Southwest and United.

Chin would not comment on the airport’s plan to enforce social distancing.

Delta and Southwest Airlines told the Miami Herald that flights won’t be back up and running at MIA until at least Monday or Tuesday. Though both airlines noted there still may not be any available flights in the upcoming days.

“My wife and I have to take off work since we have to drive 10+ hours from #Miami to #NC because no flights can be guaranteed until Wednesday!” one passenger wrote.

Southwest spokeswoman Alyssa Foster told the Herald that the airline is “not accommodating hotels or car rentals, but is working on getting passengers back on the first available flight.”

Delta spokeswoman, Crystal Drake said she was still unclear on whether the airline would be helping with accommodations. American Airlines declined to comment on its accommodation plan but said they are “working to have them on their way as soon as possible.”

“Calling in an SOS to help at Miami International Airport,” posted passenger Todd Gibbs on Twitter. “Flights diverted and canceled due to inclement weather. Unacceptable customer service helping people understand where their bags are. Some travelers at baggage claim for 10+ hours. No communication from AA.”

Other passengers tried to find some humor in the situation.

“Every flight out of Miami right now is delayed or canceled and therefore everyone in the airport is stress eating McDonald’s,” wrote Dan Koday on Twitter.