March 28 (UPI) — The United States and the Philippines opened one of their largest-ever joint military exercises on Monday against the backdrop of an increasingly assertive China in the disputed South China Sea.

The Philippine-led annual exercise, called Balikatan, will involve 5,100 American military personnel and 3,800 members of the Armed Forces of the Philippines in a range of drills including maritime security, amphibious operations, live-fire training, aviation operations, counterterrorism and disaster relief.

The event will take place across Luzon, the largest and most populous island in the Philippines, until April 8.

“During Balikatan, the U.S. military and AFP will train together to expand and advance shared tactics, techniques, and procedures that strengthen our response capabilities and readiness for real-world challenges,” Maj. Gen. Jay Bargeron, U.S. 3rd Marine Division Commanding General, said in a statement. “Our alliance remains a key source of strength and stability in the Indo-Pacific region.”

Balikatan, which means “shoulder-to-shoulder” in Tagalog, was canceled in 2020 and significantly scaled down in 2021 due to the COVID-19 pandemic.

The exercises come as tensions with China are on the rise in the South China Sea, almost all of which Beijing claims as its territory.

The Philippines Coast Guard on Sunday accused its Chinese counterpart of nearly colliding with a Philippine patrol vessel in the disputed waters of the Scarborough Shoal. 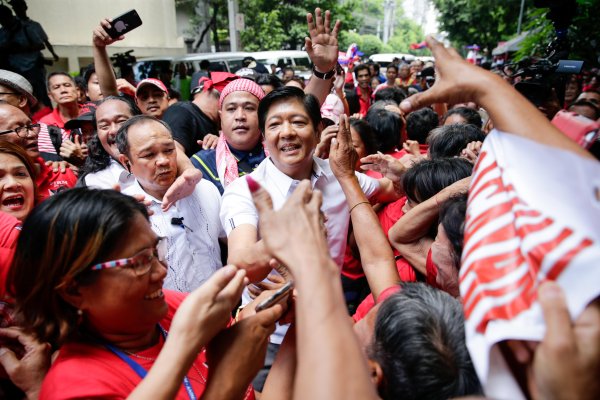 Philippine voters will go to the polls on May 9 to elect their next president. The front-runner, Ferdinand Marcos Jr., known as “Bongbong,” has signaled that he plans to pursue Beijing-friendly policies. File Photo by Mark R. Cristino/EPA-EFE

The incident took place on March 2, the coast guard said, and was the fourth close call in less than a year at the shoal, a traditional fishing ground located around 120 miles off the coast of Luzon in the exclusive economic zone of the Philippines.

China has controlled the Scarborough Shoal since a 2012 standoff with the Philippines and an international tribunal in 2016 rejected China’s historical claims over most of the South China Sea, but Beijing has ignored the decision.

Two weeks ago, Manila summoned the Chinese ambassador to complain about the “illegal incursion” of a Chinese naval ship into Philippine waters in the Sulu Sea.

Outgoing President Rodrigo Duterte, who looked to pivot towards China when he took office in 2016, announced early in his tenure that he planned to cancel the Balikatan exercise and end a key military pact with the United States.

However, the populist strongman reversed his decision last summer amid a growing number of flare-ups with China, and in November loudly protested when Chinese coast guard vessels blocked and fired water cannons at Philippine supply ships.

Philippine voters will go to the polls on May 9 to elect their next president. The current front-runner, Ferdinand Marcos Jr., known as “Bongbong,” has signaled that he plans to pursue Beijing-friendly policies. He is the son of former Philippine dictator Ferdinand Marcos, who ruled the Philippines from 1965 until his removal from office in 1986.