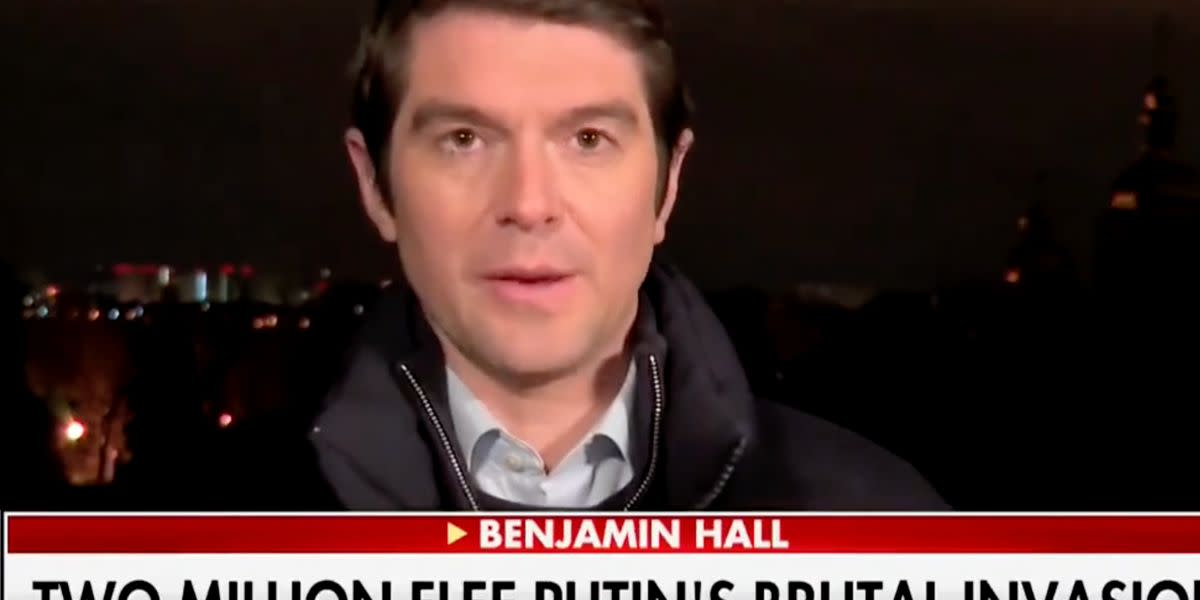 A Fox News correspondent in Kyiv took issue Tuesday with suggestions made on air by colleague Greg Gutfeld that the media have been pushing a lopsided narrative on Ukraine to evoke an “emotional response” for profit.

“Speaking as someone on the ground, I want to say that this is not the media trying to drum up some emotional response,” reporter Benjamin Hall said, evidently having heard Gutfeld’s comments on “The Five” shortly before he dialed in.

“This is absolutely what’s happening. From the cities of Kharkiv to Mariupol to Chernigov, they are being absolutely flattened. And from all corners of this country, people are fleeing for safety.”

“In the city of Mariupol, people are drinking water from puddles because the Russian forces haven’t allowed them to get out. When they have tried to get out, they are shelled.”

“And don’t take it from my word, take it from the words of some of those who are trying to flee,” he added, cutting to footage of tearful civilians trying to escape.

“Speaking as someone on the ground, I want to say that this is not the media trying to drum up some emotional response.” pic.twitter.com/QFom203TCB

During a discussion about Russia’s targeting of Ukrainian civilians, Gutfeld questioned the news coverage of the conflict, suggesting it was being manipulated to try to create a reaction.

“However, I can’t help but feel that this is a lot like other stories that we’ve gone through in the Digital Age in which an image is taken and then played over and over and over again to create some kind of emotional response out of you, because that makes a profit for news companies, right?” he added.

“This is a lot like other stories…in which an image is taken and then played over and over and over again to create some kind of emotional response out of you, because that makes a profit” pic.twitter.com/J5HXtw9iLp

He then drew a link between coverage of Ukraine and media reporting on police brutality in 2020, which he implied was overblown and led to “a year of riots.”

“Just because the news is pushing these videos at you doesn’t mean you gotta do something,” he said.

He later responded to his colleague’s comments from the war zone, calling it a “cheap attack.”

“Should I address Benjamin Hall’s cheap attack on me or be a good co-worker and let it slide?” he asked his colleague Dana Perino.

“I will be the better man here,” he continued. “As I said before, when this started, we want the quickest end possible. My concern has always been, when a narrative creates a story that bolsters one side, that is out of its element, will you create more suffering?”

More than 2 million refugees have fled Ukraine since Russia invaded it two weeks ago, according to the United Nations. Hundreds of civilians have been killed in bombings as Russian ground and air forces push in on Ukrainian towns and cities. Ukrainian citizens and leaders have begged the world for military and humanitarian aid as the crisis unfolds.