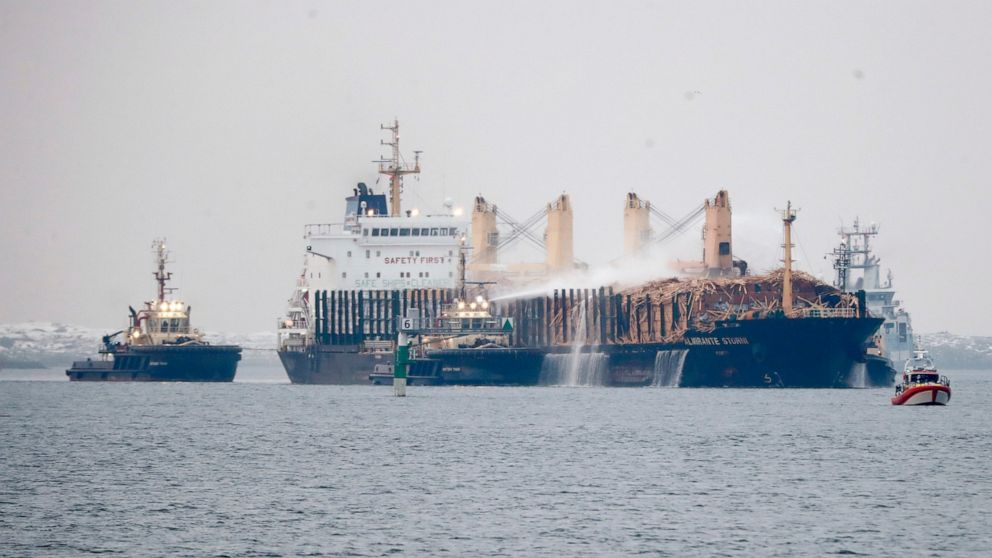 HELSINKI — A fire-ravaged German-owned cargo vessel was towed to port in the western Swedish city of Goteborg on Saturday after a weeklong blaze that broke out on the North Sea when the ship’s timber cargo caught fire.

The Liberia-flagged Almirante Storni, built in 2012, was towed to Goteborg early Saturday by pilot and tug boats under the surveillance of the Swedish Coast Guard, officials said.

The vessel issued a distress call on Dec. 4 after its timber cargo caught fire and while the vessel itself wasn’t burning Swedish officials said burning timber was difficult to extinguish out at sea. Boats from Denmark and Norway helped in the effort to put out the fire this week.

The vessel, reportedly en route to Alexandria, Egypt, was anchored off the island of Vinga close to Goteborg this week before being taken into port on Saturday.

The ship, owned by the Hamburg, Germany-based shipping company NSC, is now being examined by experts who said its timber cargo is still hot and not fully contained.

“It looks really good now. The initial fire was extinguished fairly immediately but the cargo kept burning at full force and we weren’t able to put that fire out with our water cannons,” Jonas Grevstad, Swedish Coast Guard spokesman, told the Swedish public broadcaster SVT

Swedish news agency TT said Almirante Storni’s 17-strong crew remains aboard the vessel along with rescue and firefighters who are now trying to unload the ship’s smoke-filled timber cargo.