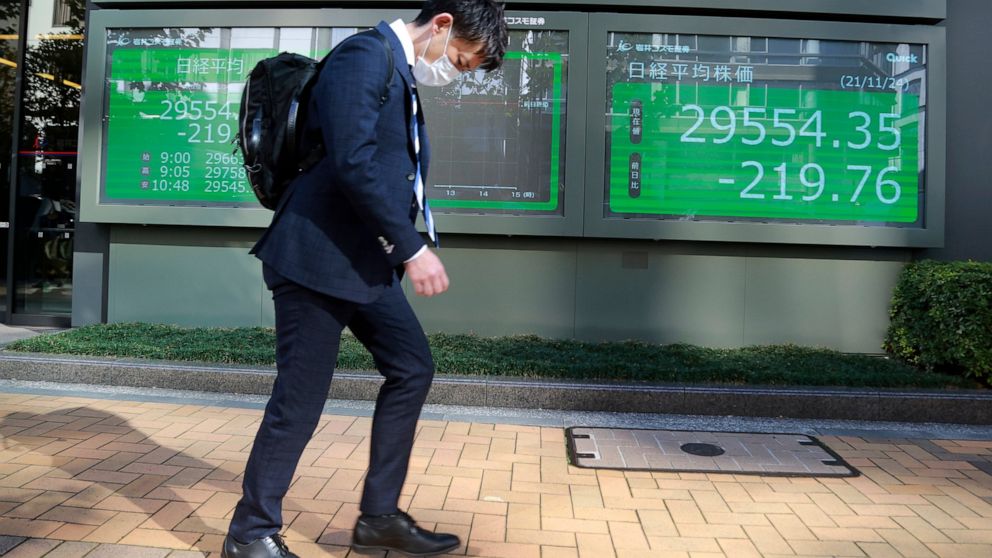 Global shares are mixed as worries about inflation set off expectations the U.S. Federal Reserve might accelerate its plans to raise interest rates

TOKYO — Global shares were mixed Wednesday as worries about inflation set off expectations the U.S. Federal Reserve might move faster than anticipated to raise interest rates.

Stocks are likely to see more mixed trading this week, with U.S. markets closing on Thursday for Thanksgiving and then closing early on Friday.

“Markets continue to shift their expectations toward a tighter Fed monetary policy,” said Yeap Jun Rong, a market strategist at IG, adding that investors will be watching for U.S. data being released later in the day.

Wall Street will get a few pieces of economic data on Wednesday that could give investors a better sense of the economic recovery’s pace and breadth.

The Labor Department will release its weekly report on unemployment benefits. The Commerce Department releases data on third-quarter gross domestic product and its new home sales report for October.

The Fed will release minutes later in the day from its October policy meeting, potentially giving investors more details on the central bank’s plan to start trimming bond purchases that have helped keep interest rates low.

Some Asian central banks have already begun to raise interest rates to tamp down inflation. New Zealand’s raised its benchmark interest rate by 0.25% Wednesday to 0.75%.

In October the Reserve Bank raised it from a record low 0.25% to 0.5%, the first such hike in more than seven years, removing some support it put in place when the coronavirus pandemic began.

Investors have been watching to see if pressure from rising inflation will goad the Fed into speeding up its plans for trimming bond purchases and raising its benchmark interest rate.

The price of U.S. crude oil rose extended gains after President Joe Biden ordered 50 million barrels of oil released from the nation’s strategic reserve to help bring down energy costs. The move was made in concert with other big oil-consuming nations, including Japan, South Korea and India.

The release of the oil reserves may not necessarily bring down oil prices, but analysts say it may serve as a message to OPEC. Biden has been urging other big oil producers to more quickly raise output to match higher demand as economies recover from earlier phases of the pandemic.