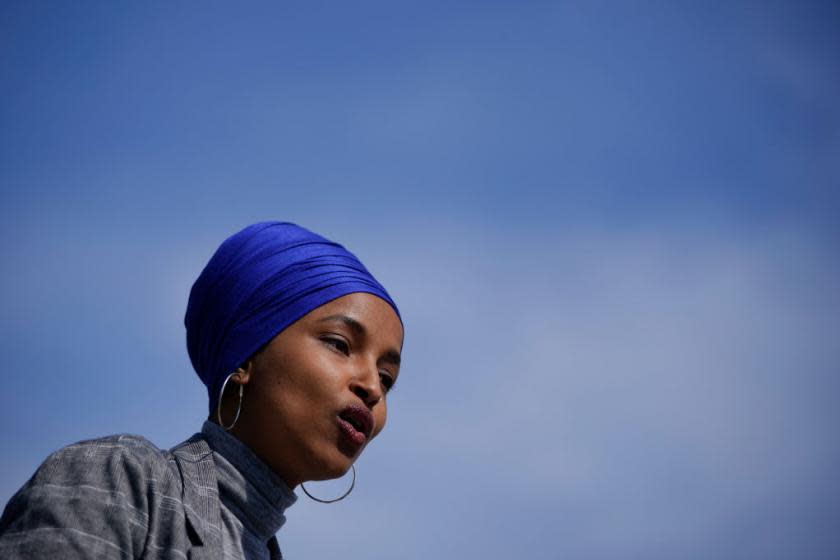 Omar backs MLB’s move to relocate game while Abrams says she fears families will be ‘hurt by lost events and jobs’ Interview: Park Cannon on the Georgia voting law Congresswoman Ilhan Omar holds a ‘Stop Asian Hate’ press conference in Minneapolis, Minnesota, on 31 March. Photograph: Nikolas Liepins/REX/Shutterstock The Minnesota representative Ilhan Omar has backed Major League Baseball’s decision to move its All-Star Game from Georgia over a restrictive new voting law. But in doing so she placed herself at odds with another leading progressive, the voting rights campaigner Stacey Abrams. Abrams, who suffered a narrow defeat in the Georgia gubernatorial race in 2018, commended the MLB’s decision on Friday but said she was disappointed the game was being relocated. “I respect boycotts,” she said, “although I don’t want to see Georgia families hurt by lost events and jobs. Georgians targeted by voter suppression will be hurt as opportunities go to other states. We should not abandon the victims of [Republican] malice and lies – we must stand together.” On Saturday the PGA Tour and the PGA of America made similar arguments when they said they would not move events scheduled for Georgia this summer. The Masters, perhaps the biggest event in golf, begins in Augusta, Georgia this week. Many observers question the accepted wisdom that big sporting events bring economic benefits but on Sunday, on CNN’s State of the Union, Omar was asked if she agreed with Abrams. “We know that boycotts have allowed for justice to be delivered in many spaces,” Omar said. “The civil rights movement was rooted in boycotts. We know that apartheid ended in South Africa because of boycotts. “And so our hope is that this boycott will result in changes in the law because we understand that when you restrict people’s ability to vote, you create a democracy that isn’t fully functioning for all of us, and if we are to continue to be beacon of hope for all democracies around the world we must stand our ground.” Conservatives have protested the MLB decision to take the All-Star Game away from Georgia. On Friday, Trump told supporters they should “boycott baseball” in return. Among other measures, the Georgia law applies restrictions to early and mail-in voting, measures likely to affect minority participation. Republicans have countered Democratic protests by saying the law merely seeks to avoid electoral fraud, which Donald Trump claimed was rampant in his defeat by Joe Biden in Georgia and elsewhere – a lie repeatedly laughed out of court. Omar was asked if other states which do not even allow early or mail-in voting should examine their own laws. “They certainly should,” she said. “I mean, Minnesota is not No1 in voter turnout and participation because we are special, even though we are. It’s because we have made voting accessible for people. And it is really important that every single state, we examine their voting laws and make sure that voting is accessible to everyone.” Omar also referred to pending federal legislation which seeks to counter moves by Republican-led states. The For the People Act, technically known as HR1, has passed the House but seems unlikely to pass the 50-50 Senate unless Democrats reform or abolish the filibuster, under which bills must attract 60 votes to pass. “It’s also going to be really important for us to continue to push HR1,” Omar said, “which makes [voting] accessible nationwide and strengthens our democracy.”