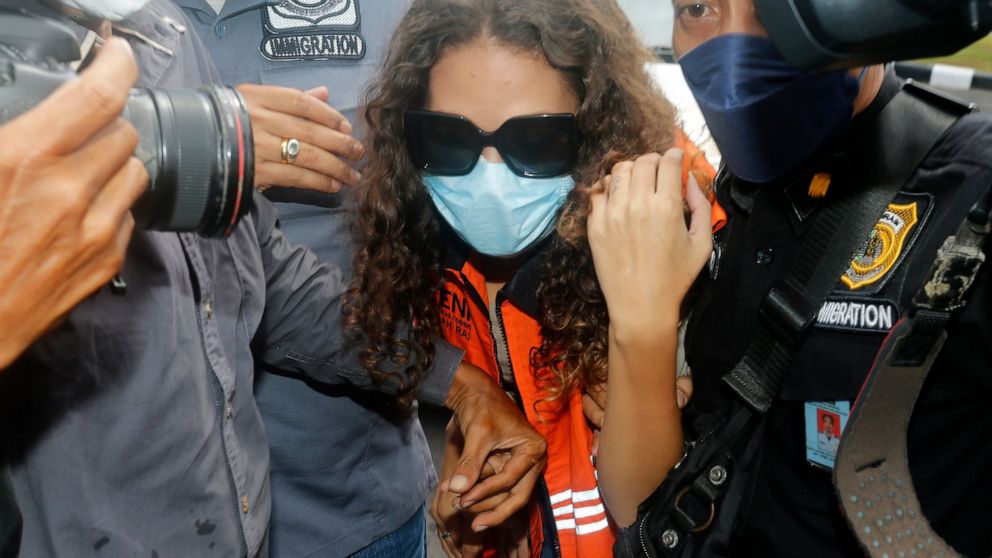 DENPASAR, Indonesia — An American woman convicted of helping to kill her mother on the Indonesian tourist island of Bali and stuff the body into a suitcase was deported Tuesday to the United States.

Heather Mack, 26, was released from prison on Friday after serving seven years and two months of a 10-year sentence. Her then-boyfriend, who was also convicted in the killing, was sentenced to 18 years and remains in prison.

Immigration officials escorted her to Bali’s airport on Tuesday for a flight to Jakarta, where she later departed for Chicago.

The badly beaten body of her mother, wealthy Chicago socialite Sheila von Wiese-Mack, was found in a suitcase inside the trunk of a taxi parked at the upscale St. Regis Bali Resort in August 2014.

The killing generated national and international attention for years, in part because of photographs of the suitcase that appeared too small to hold an adult woman’s body.

Mack, who was almost 19 and a few weeks pregnant, and her then-21-year-old boyfriend, Tommy Schaefer, were arrested a day later after they were found at a hotel about 10 kilometers (6 miles) from the St. Regis.

Their daughter, Stella Schaefer, was born shortly before they were convicted in 2015. Under Indonesian law, she was allowed to live with her mother in her cell in Kerobokan female prison until she turned 2, when Mack gave custody of her young daughter to an Australian woman until her release from prison.

Until she was freed Friday, Mack had not seen her daughter for about 20 months because authorities halted prison visits during the coronavirus pandemic.

Her attorney, Yulius Benyamin Seran, said earlier that Mack had asked for the girl, who is now 6, to remain with her foster family to avoid media attention in the U.S. Indonesian officials refused.

“Minors must be accompanied by their mothers when their mothers are deported. There is no policy that allows a mother to leave her underage child here,” said Amrizal, chief of the Bali immigration office.

Mack’s sentence was shortened by a total of 34 months due to reductions that are often granted to prisoners on major holidays because of good conduct.

After her release, Mack stayed at an immigration detention center for four days while waiting for her flight tickets and travel documents to be ready.

She was tightly escorted by immigration officers to Bali’s airport for the flight to Jakarta.

Jamaruli Manihuruk, chief of the Bali regional office of the Ministry of Law and Human Rights, said his office has asked the central government to ban Mack from Indonesia for life.

Mack reportedly had a troubled relationship with her mother, with officials in the U.S. confirming that police had been called to the family’s Oak Park, Illinois, home dozens of times.

Bali police said the hotel’s surveillance cameras showed that Mack and Schaefer had argued with her mother in the lobby of the hotel shortly before the killing, which allegedly took place inside a room in the hotel.

Schaefer testified in court that von Wiese-Mack was angry at him when she learned about her daughter’s pregnancy. He said she insulted him and Mack, wanted her to get an abortion and strangled him in a heated argument before he struck her several times with a fruit bowl.

Prosecutors said Mack helped stuff her mother’s body in the suitcase by sitting on it to enable Schaefer to close it.

Later video from the corridor showed Mack bringing a cart to move the suitcase and Schaefer carrying the suitcase to the cart. Video also showed the couple talking to a taxi driver. The two allegedly abandoned the suitcase in a taxi and left through the hotel’s back door.