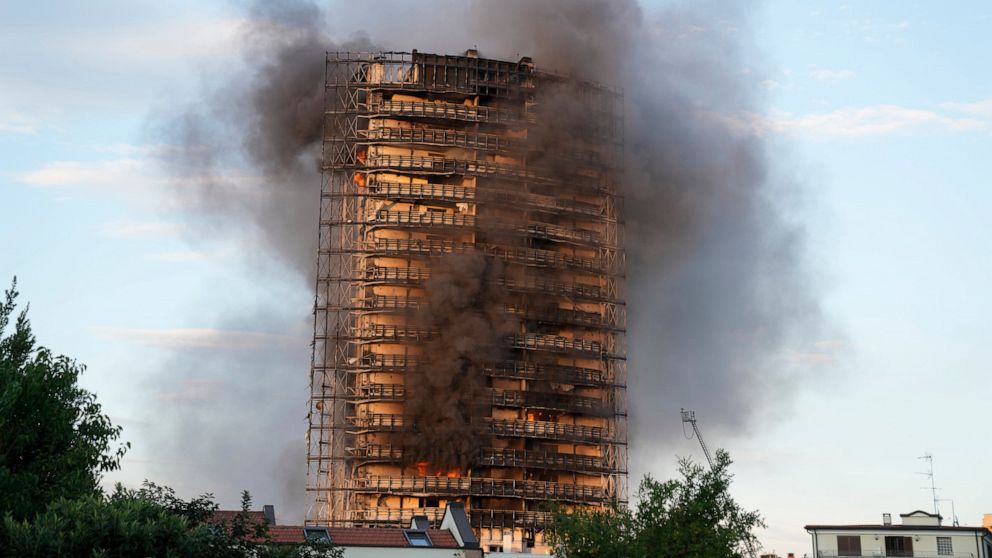 Italian firefighters are tackling remaining hotspots and continuing to search a 20-story apartment building in Milan that was destroyed by fire, but say there is no indication that anyone is missing inside

MILAN — Italian firefighters on Monday were tackling remaining hotspots and continuing to search a 20-story apartment building in Milan that was destroyed by fire, but said that there was no indication that anyone was missing inside.

Some cases of smoke inhalation were reported from Sunday’s blaze, but no serious injuries or deaths.

The blaze recalled the deadly fire that swept through Grenfell Tower in London in 2017. In that case, the cladding on the outside of that building was blamed for the speed at which the fire engulfed the block, and officials noted similar issues in the Milan fire.

“I have never seen a situation like this,” said firefighter official Giuliano Santagata. ”Just look at the facade and you see that everything is completely burned, and therefore presume that it was made of flammable material.”

Santagata said the blaze was under control, although there were still outbreaks in some apartments.

The fire was reported by a resident on the 15th floor, who sounded the alarm as he descended the building telling other occupants to evacuate. Residents of the building included Italian rapper Mahmood, who was the 2019 winner of the San Remo music festival.

Residents said the blaze quickly spread through the cladding on the facade, which they said was supposed to have been fire resistant, Corriere della Sera reported.

“The cause of the fires still needs to be determined, but it seems that the rapid spread of the flames was due to the thermal covering of the building,” said Carlo Sibia, an Interior Ministry official in Rome.

Firefighters broke through doors apartment by apartment in the search for anyone left inside and followed up by telephoning residents who remained unaccounted-for. “There is no evidence of anyone missing,” said commander Felice Iraca.

Firefighters were continuing searches of the building and verifying damage to the structure. Prosecutors also were investigating for any indication of wrongdoing.

The 60-meter (nearly 200-foot) tall building, part of a decade-old development project, was designed to look like the keel of a ship and included an aluminum sail on its roof, which burned and fell to the street in pieces.

In the Grenfell Tower fire, flammable cladding and lax fire safety standards were blamed for the June 2017 blaze at a high-rise residential tower in London that killed 72 people — the greatest loss of life in a fire on British soil since World War II.

The fire started in an apartment kitchen and rapidly engulfed the 24-story public housing block. The tragedy has prompted inquiries and reviews into high-rise building materials, and Britain’s government has pledged to spend hundreds of millions of pounds to strip similar combustible cladding from dozens of other publicly owned tower blocks.