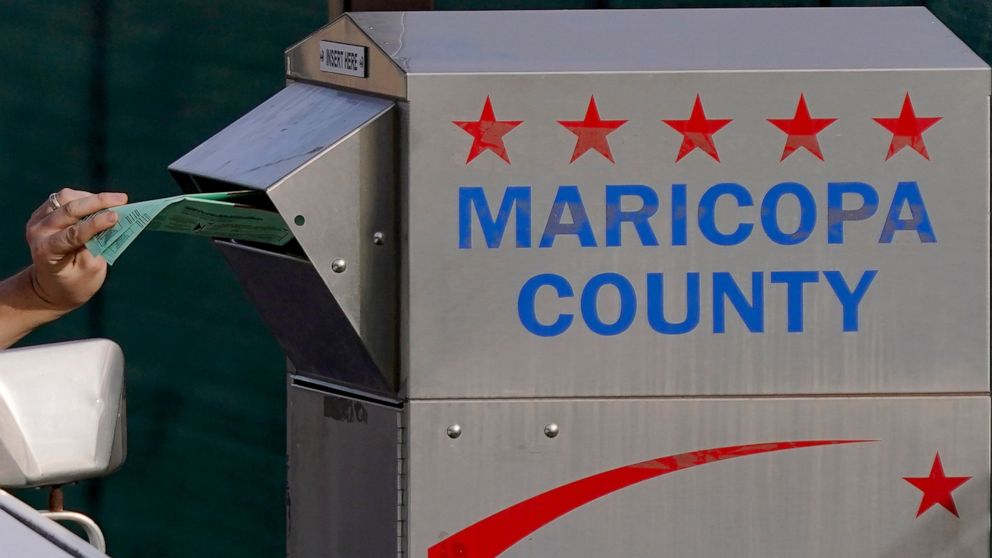 WASHINGTON — The Justice Department will send monitors to 24 states in an effort to ensure compliance with federal voting rights laws in Tuesday’s elections.

The action, which occurs regularly on Election Day, comes as civil rights groups and the federal government have raised alarm over potential voter intimidation at some polling places and ballot boxes.

The 2022 election is playing out against the backdrop of persistent falsehoods made by former President Donald Trump and his Republican allies about losing the 2020 vote, a relentless campaign that will have implications as people cast their ballots.

Democrats, on the other hand, have expressed concerns over the potential for voter suppression.

The 64 jurisdictions where federal monitors — typically lawyers with the department’s civil rights division and U.S. attorney’s offices across the United States — are going include Maricopa County, Arizona, where there have been reports of people watching ballot boxes, sometimes armed or wearing ballistic vests. The Justice Department also announced it would be sending monitors to Cole County, Missouri, where local elections officials have said they would block the monitors.

The attorneys will be in regular touch with election officials in the locations and will watch for signs of disruption to voters’ ability to cast ballots. There is also a call-in line should voters feel they are suffering discrimination at a polling place.

The monitors are being sent to “protect the rights of voters,” as they have for decades, the Justice Department said Monday.

A look at the monitors:

WHO ARE THE ELECTION MONITORS?

The monitors are lawyers who work for the U.S. government. They are not law enforcement officers or federal agents. They generally include lawyers from the Justice Department’s civil rights division and U.S. attorney’s offices across the nation. The government also sometimes brings in employees from other agencies, such as the Office of Personnel Management, who are authorized to act as monitors under a federal court order.

WHY ARE THEY BEING SENT TO WATCH ELECTION SITES?

The Justice Department has sent attorneys to monitor election sites and compliance with federal voting laws for more than five decades. The department’s civil rights lawyers are responsible for enforcing civil action tied to the voting statutes and protecting the right to vote.

The laws they enforce include the Voting Rights Act, along with the National Voter Registration Act and other statutes. Prosecutors in the same division also enforce criminal statutes that prohibit voter intimidation and efforts to suppress voting based on someone’s race, national origin or religion.

WHAT HAS BEEN HAPPENING IN MARICOPA COUNTY?

The Justice Department has warned about the potential for violations of the Voting Rights Act after people, sometimes armed or wearing ballistic vests, were monitoring ballot boxes in Maricopa County. There was a lawsuit over the activity and the department filed a statement of interest in the case. Federal officials have said that while lawful poll watching can support transparency, “ballot security forces” present a significant risk of voter intimidation.

WHAT IS THE CONTROVERSY IN COLE COUNTY?

Ashcroft accused the department of “trying to bully a hard working county official.”

In a Thursday email shared by Ashcroft, an assistant U.S. attorney told Korsmeyer that four Department of Justice staffers planned to visit polling sites on Election Day and briefly question poll officials as part of a review in coordination with the civil rights division.

“Rest assured that we understand that you will be administering the election and we will try to minimize the time we spend at each site,” Assistant U.S. Attorney Charles Thomas wrote.

Reiterating his stance on Monday, Korsmeyer told The Associated Press, “The DOJ won’t be allowed into our polling locations,” citing a state statue that gives him some leeway in deciding who, other than election workers, is allowed to enter polling places.

The Justice Department did not immediately comment Monday when asked about the comments by Korsmeyer and Ashcroft.

WHERE ARE THE MONITORS BEING SENT?

The Justice Department plans to send the monitors to 64 jurisdictions in 24 different states.

Check out https://apnews.com/hub/explaining-the-elections to learn more about the issues and factors at play in the 2022 midterm elections.