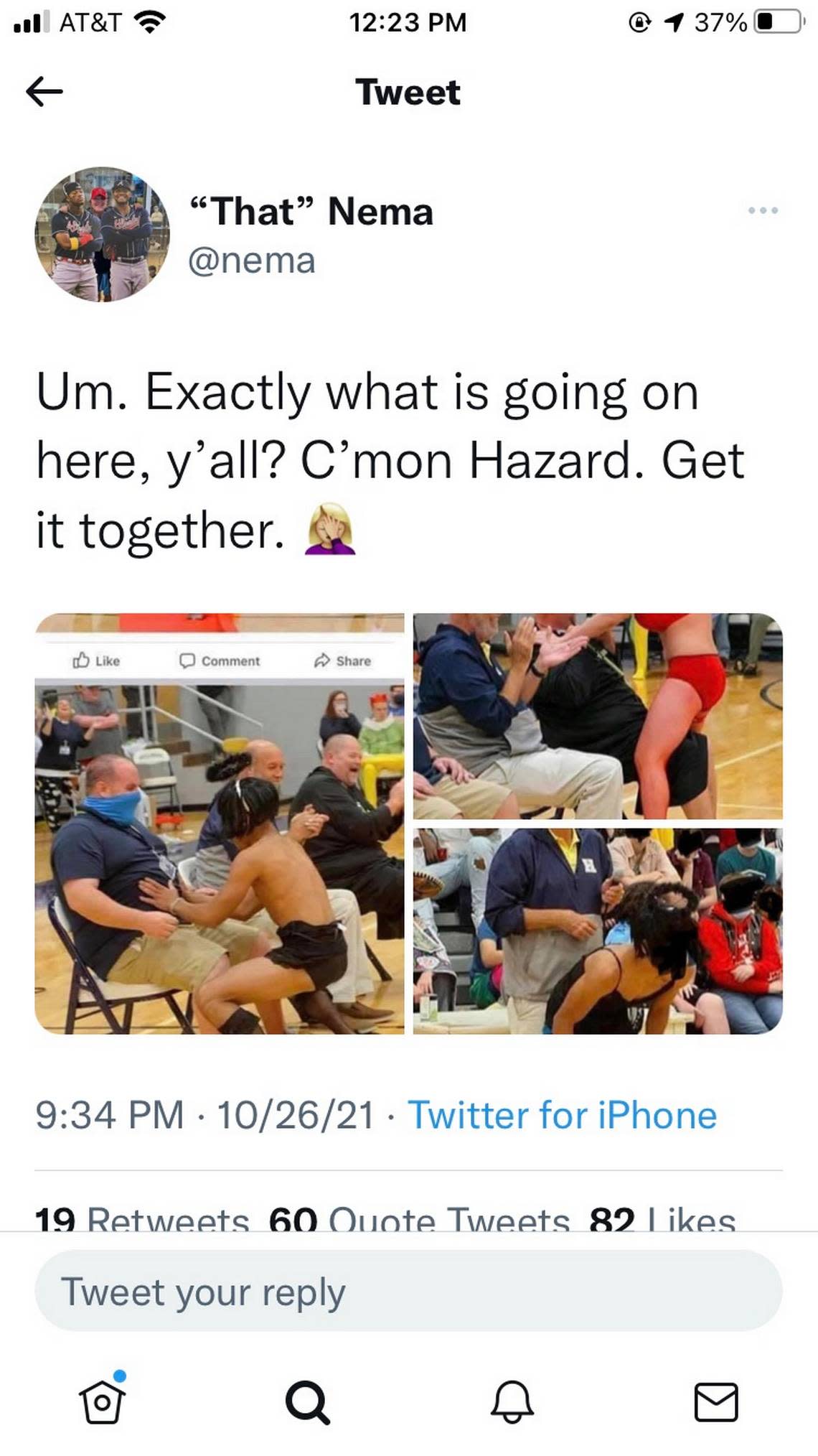 I’m always talking about how school needs to be more fun, and finally, I’ve found the place: Hazard High School knows how to party! For homecoming this year, they put on a boffo event in the gym, including what appears to be girls in Hooters t-shirts carrying glasses of (I assume, but hey, maybe not!) make-believe beer. But what really brought the house down was when some male students dressed up in tights and bikinis and did pretend lap dances for teachers and administrators. The crowd included Principal Don “Happy” Mobelini, who looked delighted at the antics.

The pictures were posted on the Hazard High School Athletics page earlier this week, then quickly taken down after some spoilsports noticed and raised a stink. The Courier Journal described it as a “Man Pageant” during Homecoming. The whole thing is being investigated by the Hazard Independent Superintendent.

I first saw the pictures posted by Nema Brewer, co-founder of 120 United, a teacher advocacy group. She seemed to think that this broke the rules about teacher/student interactions.

“I will not advocate for public education and turn a blind eye to things WRONG amongst the ranks,” Brewer tweeted on Wednesday. “I am DISGUSTED by the good ol boy system. The double standard. Hate. Me. I don’t care. Wanna blame teachers for all the things? Start first with their administrators.”

Schools are very confusing places these days, and I’m just not sure what’s safe and what’s not these days. Books about the civil rights movement, not safe. History lessons about racism, nope. Masks are warping our young people! Vaccines might kill them! But giving your teacher a pretend lap dance is A-ok? At least it must have been to the numerous teachers, administrators and other adults who were in the gym that day.

Over in Floyd County, they’ve banned books to keep kids safe, because reading about a little girl who desegregated the New Orleans schools was too scary, according to parents.

In Virginia, some parents want to ban “Beloved” by Toni Morrison, who won the Nobel Prize in Literature, because it gave a high school boy nightmares. In Texas, one state lawmaker who is running for Attorney General has launched an investigation into books like “The Confessions of Nat Turner,” William Styron’s opus about an uprising against slavery because nothing says higher office like a good book banning.

Parents seem to spend a lot of time these days screaming at school board meetings. Do the parents of Hazard High School know about this? Will they care as much as Floyd County parents do about how Ruby Bridges might warp young minds?

Happy Mobelini has been investigated for students having alcohol on school grounds before, according to our archives. But hey, he’s busy, because he’s also the Mayor of Hazard.

Maybe safety is just a state of mind. Girls are routinely sent home for wearing short shorts. Teachers have been reprimanded for supporting Black Lives Matter. But in Hazard, it’s all good. Do you think the Mayor/Principal had a slight twinge of discomfort when the student started writhing in front of him? Hey, is it ok if it looks like everyone is having fun? To be clear, no. No, it’s not.