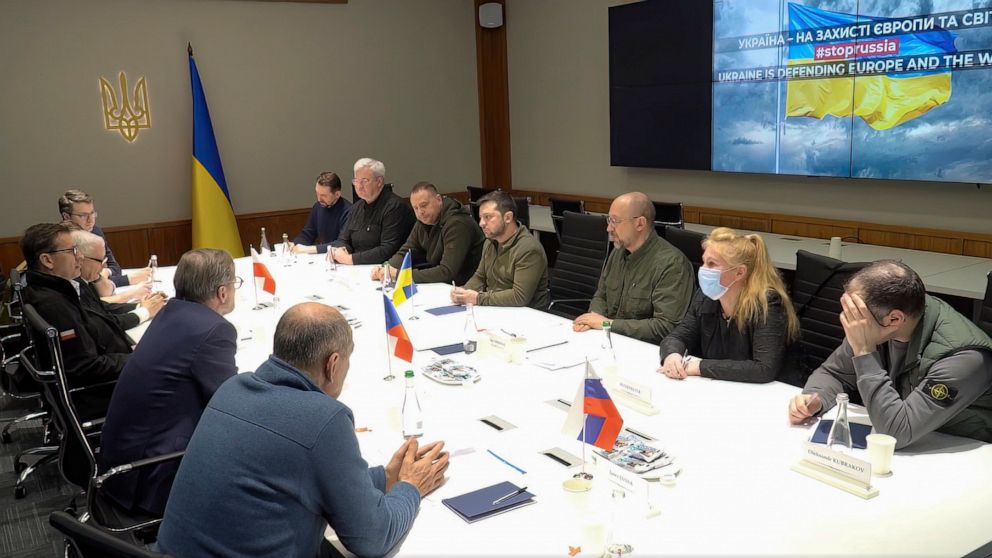 The prime ministers of Poland, the Czech Republic and Slovenia have safely returned to Poland after a visit to the embattled Ukrainian capital of Kyiv

WARSAW, Poland — The prime ministers of Poland, the Czech Republic and Slovenia safely returned to Poland Wednesday after a visit to Kyiv intended to show support for Ukraine as it defends itself against the Russian military onslaught.

The leaders met with President Volodymyr Zelenskyy on Tuesday to convey a message of solidarity with Ukraine and of support for the nation’s aspirations to one day join the European Union.

They went ahead with the hours-long train trip despite concerns about risks to their security while traveling through a war zone. Although pronouncing their trip as an EU mission, officials in Brussels cast it as something the three leaders had undertaken on their own.

Polish government spokesman Piotr Mueller said Wednesday morning that the three had returned safely to Poland. Officials hadn’t given details about their schedule for security reasons.

Prime Ministers Mateusz Morawiecki of Poland, Petr Fiala of the Czech Republic and Janez Jansa of Slovenia were joined by Poland’s Deputy Prime Minister Jaroslaw Kaczynski – the chief of the ruling conservative party and the country’s most powerful leader.

At a news briefing late Tuesday in Kyiv, Kaczynski said he believed that a NATO peacekeeping mission is needed in Ukraine. The remark generated much discussion in Poland on Wednesday, with some commentators saying the prospect could risk drawing NATO into a war with Russia.

Follow all AP stories on Russia’s war on Ukraine at https://apnews.com/hub/russia-ukraine.

Nicki Minaj’s husband gets home confinement for failing to register as...