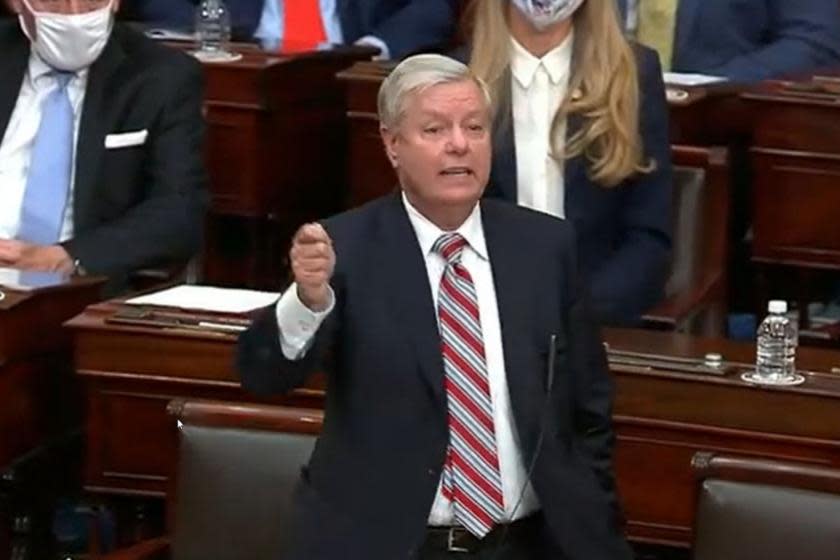 What will, and might, happen if Democrats sweep Georgia races for a 50-50 Senate

If Democrats Raphael Warnock and Jon Ossoff maintain their leads and win both up-for-grab Georgia Senate seats when the votes are all counted from Tuesday’s election, the Senate will be split 50-50. Once Vice President-elect Kamala Harris is sworn in on Jan. 20, Democrats will have 51 votes and control of the chamber — Sen. Chuck Schumer (D-N.Y.) will be majority leader and Sen. Mitch McConnell (R-Ky.) will be minority leader, among other changes.> If everything stands here’s some a look into a shift in Senate committee leadership. > > The following shift from ranking to chairman> > Banking, Housing, Urban Affairs: Sherrod Brown > > Budget: Bernie Sanders > > Finance: Ron Wyden > > HELP: Patty Murray > > Appropriations: Patrick Leahy> > — Yashar Ali (@yashar) January 6, 2021There have only been three other 50-50 Senate splits in U.S. history, mostly for short periods, The Washington Post reports, and it isn’t clear how this one will work out. The last time the Senate was evenly divided, from January to June 2001, Democratic leader Tom Daschle (S.D.) and Republican leader Trent Lott (Miss.) reached a power-sharing agreement in which the committees were split evenly. Lott was majority leader from when Vice President Dick Cheney (R) took office until Democrats convinced Vermont Republican Jim Jeffords to switch parties, giving Democrats a 51-49 majority.For those six months, “I could have been a horse’s rear, and said, ‘We have the majority, the hell with you,'” Lott told the Post on Tuesday. “And we would have had daily warfare.” The Senate could replicate that 2001 agreement, as McConnell suggested in 2016, but Lott is skeptical, given the increased polarization in the Senate. “Tom Daschle and I used to talk more in a day than Mitch McConnell and Chuck Schumer do in a month of Sundays,” he said.Either way, Democrats can use their 51 votes to set the Senate agenda, green-light President-elect Joe Biden’s Cabinet and other appointees, confirm federal judges and Supreme Court nominees, and pass certain budget-related items under the reconciliation process. Most other legislation needs 60 votes to overcome a filibuster — which Democrats could also scrap but won’t, thanks to objections from Sen. Joe Manchin (D-W.Va.) and other moderates.Since Democrats also control the House, the Post’s Dave Weigel notes, they can use the Congressional Review Act to kill any Trump administration regulations enacted in the past few months, as Republicans did liberally with Obama administration regulations in early 2017. If either Georgia Democrat loses, the Senate remains in GOP control.More stories from theweek.com Trump claims he’ll lead march to the Capitol, only to slip back to White House in motorcade GOP Electoral College objectors are starting to fold 7 scathing cartoons about Trump’s Georgia phone call

Alexei Navalny’s wife among those arrested in Moscow protests

Alexei Navalny’s wife among those arrested in Moscow protests