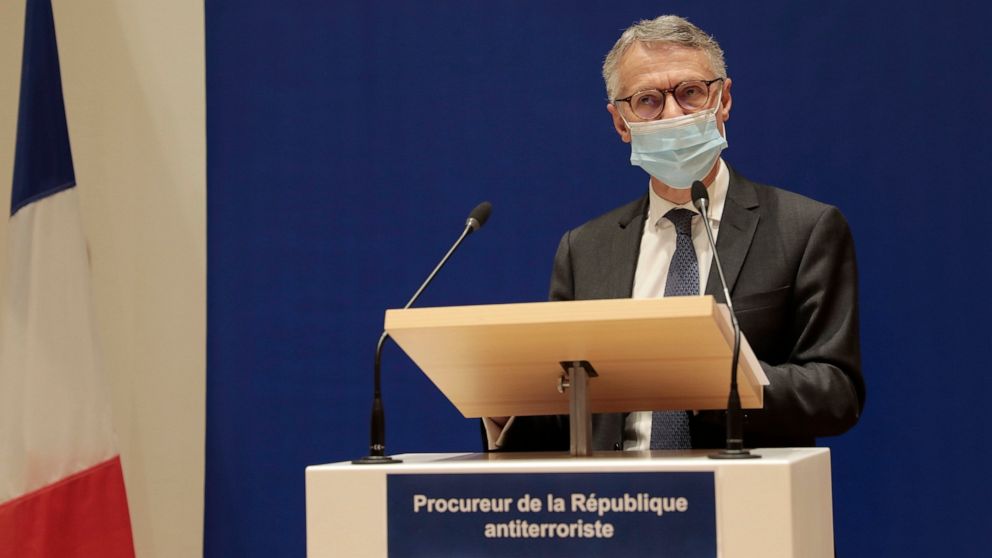 PARIS — President Emmanuel Macron promised Wednesday that France will not renounce freedoms taught by a schoolteacher beheaded by a radical Islamist last week after showing caricatures of the prophet of Islam to his class.

At a national memorial at the Sorbonne University in central Paris, Macron praised history teacher Samuel Paty as the “face of the Republic” who “believed in knowledge.”

Paty, 47, was murdered on Friday by an 18-year-old of Chechen origin who had become radicalized. He was in turn shot dead by police.

“Samuel Paty … became the face of the Republic, of our will to shatter terrorists, to (do away with) Islamists, to live like a community of free citizens in our country,” Macron said. “We will continue.”

A ceremonial military guard carried the teacher’s coffin into the cobblestone courtyard of the Sorbonne where the memorial took place before his family, government members and select guests. A giant screen was installed outside.

The stirring ceremony, with readings that included a poem by Albert Camus to his own teacher, came hours after the prosecutor sketched out how the teenager came to kill Paty, with the suspected help of two young students at the school in a northwest Paris suburb.

Jean-Francois Ricard said a 14-year-old and a 15-year-old are among seven people taken before an investigating magistrate on accusations of “complicity in murder in relation with a terrorist undertaking” and “criminal conspiracy.”

The killer offered students at the school where Paty taught 300-350 euros ($355-$415) to help him pick out the educator, Ricard said during a news conference.

“The investigation has established that the perpetrator knew the name of the teacher, the name of the school and its address, yet he did not have the means to identify him,” the prosecutor said. “That identification has only been possible with the help of students from the same school.”

He said the implication of the two young adolescents “appeared to be conclusive.”

Authorities have identified the killer as Abdoullakh Anzorov., a Moscow-born Chechen refugee.

Anzorov claimed responsibility in a text accompanied by a photograph of the victim found on his phone.

The other suspects include a student’s father who posted videos on social media that called for mobilization against the teacher and an Islamist activist who helped the man disseminate the virulent messages, which named Paty and gave the school’s address, Ricard said.

Two more men, aged 18 and 19, are accused of accompanying the attacker when he bought the weapons, including a knife and an airsoft gun, the prosecutor said. One of them allegedly drove Anzorov, who lived in the Normandy town of Evreux about 90 kilometers (56 miles) of the school, to near the school about three hours before the killing.

Another 18-year-old suspect had close contacts with the attacker and endorsed radical Islamism, Ricard said.

Al three of them, who were friends of Anzorov, allegedly said that “he was ‘radicalizing’ for several months, marked by a change of behavior, physical appearance, isolation, an assiduous frequentation of the mosque and ambiguous remarks about Jihad and the Islamic State group.”

“Samuel Paty was the victim of a conspiracy of stupidity, hate, lies … hate of the other … hate of what we profoundly are,” Macron said during his speech, which blended honors to the victim and the teaching profession with his government’s efforts to root out Islamist radicals.

On Wednesday morning, the French government issued an order to dissolve a domestic militant Islamic group, the Collective Cheikh Yassine. Government spokesperson Gabriel Attal said it was “implicated, linked to Friday’s attack” and it was used to promote anti-republican hate speech. Other groups will be dissolved “in the coming weeks” for similar reasons, Attal said.

Named after a slain leader of the Palestinian Hamas, Collective Cheikh Yassine was founded in the early 2000s by the Islamist activist who is among the seven people accused of being accomplices to the attacker.

Attal also confirmed that the government ordered a mosque in the northeast Paris suburb of Pantin to close for six months.

The Pantin mosque is being punished for relaying the angry father’s message on social media.

Authorities say it has long had an imam following the Salafist path, a rigorous interpretation of the Muslim holy book.

A national memorial event is scheduled to be held Wednesday evening in the courtyard of the Sorbonne university.

Elaine Ganley in Paris contributed to this report.

Joint Chiefs chair sparks backlash after stating U.S. has ‘achieved a modicum of success’ in Afghanistan

Chinese step up attempts to influence Biden team – US official