Home World Mom in labor says she was turned away from NC hospital. ‘My... 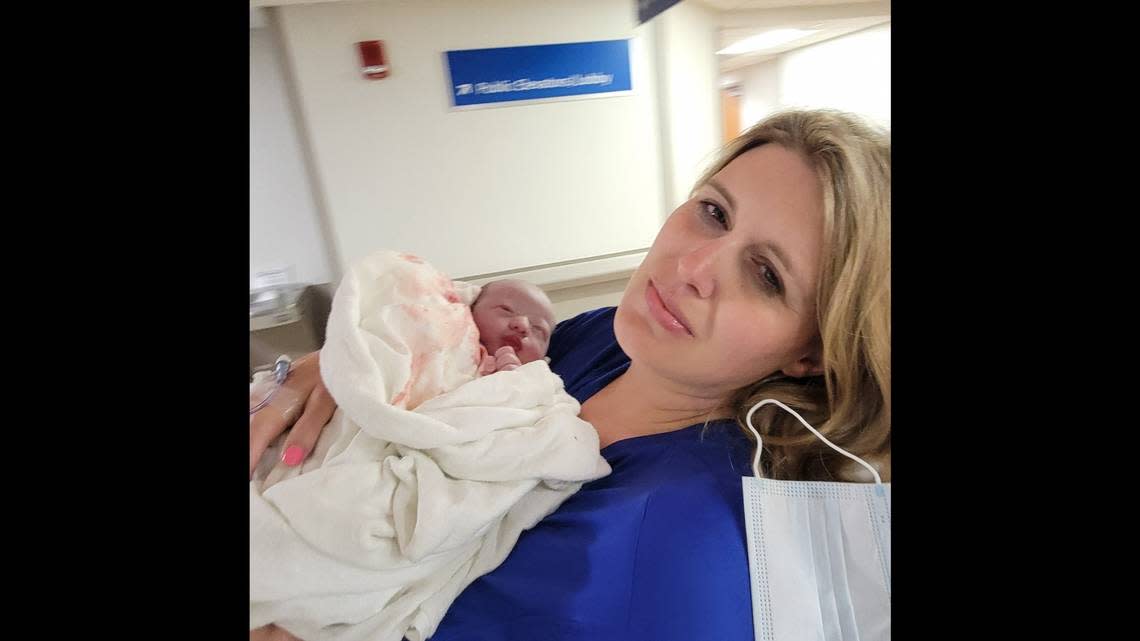 Lauren Banks didn’t expect to give birth in the front seat of her Yukon XL in a convenience store parking lot.

But after she said she was turned away from her local hospital, that’s exactly where it happened.

“It’s still weird telling the story,” she told McClatchy News. “When I tell it, it gives me so much anxiety.”

On Wednesday, March 23, one week before her due date, Banks said she went into CarolinaEast Medical Center in New Bern, North Carolina, with painful contractions. But she said her doctors told her that her cervix had dilated just 4 centimeters and that she would need to be dilated 5 centimeters to be considered in active labor.

As the pain of her contractions increased, she said the doctor told her the hospital was full and she wouldn’t be able to stay.

“He said he was sorry I was in pain, but I was giving him no medical reason to keep me,” she said. “He said, ‘Your blood pressure’s fine, I can’t keep you due to pain.’”

“At this point I am balling my eyes out on all fours on the bed,” she said. ”If I wasn’t in labor then I was dying.”

A spokesperson for CarolinaEast Medical Center told McClatchy News in a statement that the hospital could not comment on this particular case because of patient privacy laws, but that hospital staff would not turn a patient away.

“CarolinaEast absolutely did not and would not turn anyone away from the hospital,” the statement said. “It is our privilege to take care of those in need 24/7/365, and has been for more than 55 years.”

But Banks said she and her husband were sent home, and when they made it back to their house, she told him they’d need to turn around.

They decided to try driving to a different hospital when her water broke, she said. The couple called their neighbors to come watch their two daughters and hopped in the car to drive through a storm to the hospital.

As her contractions got worse, Banks said she screamed for her husband to call 911 when she realized the baby’s head was starting to emerge. The couple pulled into the parking lot of a Handy Mart in Bridgeton, a town on the coast, about 130 miles east of Raleigh.

Her husband had a 911 dispatcher on speaker phone as he tried to help his wife deliver her baby from the front seat of their SUV. He couldn’t get the passenger seat to recline because of a baby carrier blocking it from the back seat, so Banks delivered the baby sitting up, she said.

When EMTs arrived, they helped her and her baby into an ambulance and brought her back to the hospital that she said had turned her away hours earlier.

“When we got there, one of the nurses looked at me, and it looked like she’d seen a ghost,” Banks said.

In its statement, the hospital said that obstetrics patients must meet certain pregnancy metrics before they can be admitted to deliver their babies. It said every pregnant patient with a “labor concern” is immediately evaluated for their well-being and the well-being of the baby.

“Unfortunately babies don’t always cooperate with expectations…we’ve all heard stories of newborns making debuts in homes, cars, restaurants, and even gas stations,” the hospital said. “The Banks’ baby certainly made an unexpected entrance but we are so happy he is healthy and precious and absolutely wish the family all the best.”

Overall, Banks said she and her husband are just glad that she and their newborn, Truett, are safe. Other than a little bit of jaundice, the baby is healthy.

It’s scary, though, to think of what could have gone wrong, she said.

“My baby deserved better than that,” she said. “So many things could’ve happened.”

And while, right now, recounting her story causes her a lot of stress, she said when her baby — who many are affectionately calling ”Handy Mart” — grows up, she’ll tell him the story of his birth in a lighthearted way.

“I think we’ll find the joy in it when we explain it to him, so he never has to live through that stress,” she said.

Banks said she isn’t sure if her family will take legal action against the hospital, but mostly she just wants an apology and assurance that her medical bills for the post-delivery visit will be covered.

“I just hope that they do better for the next mama,” she said. “We know our bodies.”