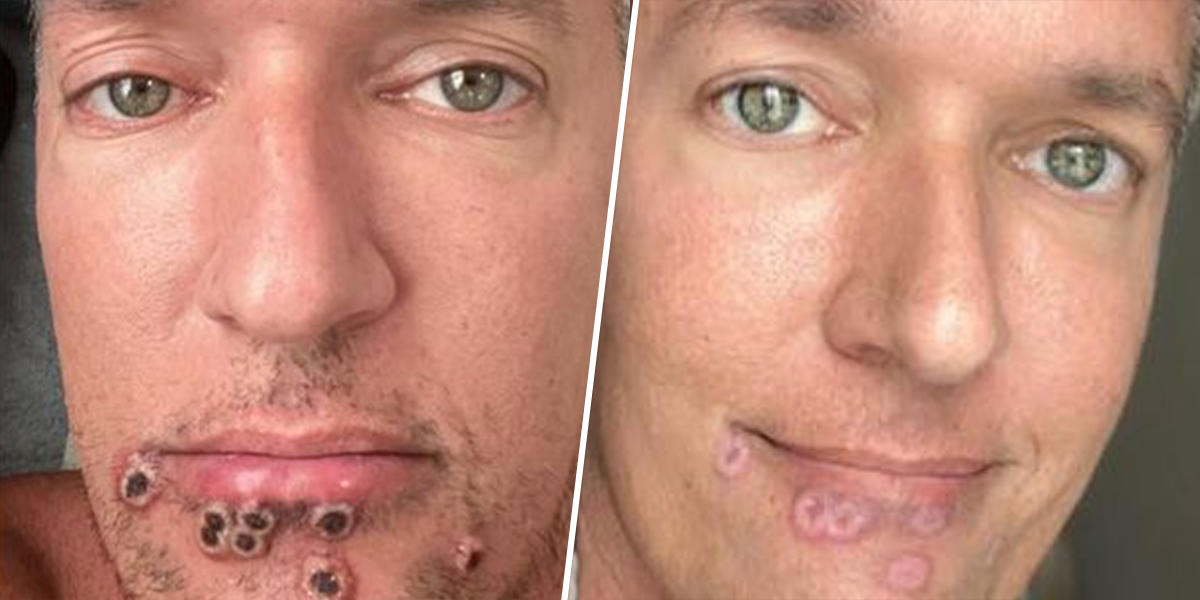 As monkeypox cases continue to rise worldwide, some people who have gotten infected are sharing photos and videos on social media to help spread awareness about the symptoms, show what the rash can actually look like and educate others about the disease.

One person who goes by the name Silver Steele on social media posted a photo timeline on Instagram of how their monkeypox lesions progressed over three weeks, which has since gone viral. (TODAY reached out to Steele for comment but hasn’t heard back.)

RELATED: As monkeypox outbreak spreads, these pictures can help you identify symptoms

The Houston, Texas, resident became infected with monkeypox in July, according to Instagram. In the caption of the now-viral collage of selfies, Steele wrote: “My goal with this is not to gross anyone out, but to educate.”

“Not everyone displays symptoms the exact same way but I’ve been told by more than one professional that my case is a ‘clinically perfect’ example and it’s being used in CDC demonstrations and medical journals,” Steele added.

It took seven to eight days for Steele’s symptoms to appear after being exposed to the virus, Steele wrote in a response to a comment on the Instagram post.

In another comment, Steele remarked on feeling “nothing” in the affected area of the face before the lesions appeared on July 10, and noted not feeling sick until five days after symptoms began. “On July 15 I had flu-like symptoms that lasted for maybe 48 hours,” Steele wrote.

Steele’s lesions progressed from pimple-like bumps to large, ulcerated sores and crusted lesions, which were described as painful. By day 18, Steele’s lesions finally started to get smaller. “The pink edges show that it’s healing,” Steele said in a video updating viewers on July 28.

RELATED: How at risk are kids in the monkeypox outbreak?

What are the common symptoms of monkeypox?

A classic case of monkeypox typically starts with a set of early flu-like symptoms (also called a prodrome), which include things like a fever, fatigue, malaise, headache, muscle aches and chills, TODAY previously reported.

Then a rash will typically appear within five days of these flu-like symptoms, but sometimes it can appear at the same time as the symptoms or without any flu-like symptoms at all, Dr. Scott Roberts, associate medical director of infection prevention for the Yale School of Medicine, previously told TODAY. As in Steele’s case, many patients have also reported developing flu-like symptoms after the lesions.

The rash itself typically starts out as a flat, red discoloration of the skin which then turns into a firm, raised bump which may look like a blister or pimple, TODAY previously reported. Monkeypox lesions are often described as deep-seated, well-circumscribed and umbilicated, meaning there’s a dimple in the middle of the lesion, Dr. Paul Adamson, assistant clinical professor of medicine at the David Geffen School of Medicine at University of California, Los Angeles, told TODAY.

The lesions then become filled with pus or fluid and eventually crust or scab over and fall off, which can take up to four weeks. “It’s basically infectious for as long as you have the rash present, until you develop a new layer of skin,” Adamson said.

“If it’s hard to look at, imagine what it’s like to have?”

The graphic selfies posted by Steele show the reality of an often painful and isolating disease. “If it’s hard to look at, imagine what it’s like to have?” said Steele in another video posted on Instagram on July 25. In the caption, Steele encouraged people to be careful at crowded events and to get vaccinated.

Currently, there are two vaccines used to prevent smallpox and monkeypox in the U.S., but supply is limited and these are not available to the general public.

RELATED: Are you eligible to get a monkeypox vaccine?

Steele ended the video by asking people to be compassionate. “These aren’t people who deserved to get a virus. They just simply got it. … If you know somebody that has it, reach out. I know there’s a lot of people that feel alone right now,” Steele said.

Other monkeypox patients have also shared photos and videos of on social media to spread the word about what the can symptoms look like and what the recovery process entails.

Maxim Sapozhnikov, a creative producer and fashion blogger living in Milan, Italy, opened up about being infected with monkeypox in June. In a TikTok posted on June 26 that has garnered over 12.1 million views, Sapozhnikov shared images of what looked like “pimples,” as Sapozhnikov put it, but turned out to be monkeypox.

“At first I was scared to talk about it, but then I decided that I want to help people who are going through #monkeypox,” Sapozhnikov wrote in the caption.

In an interview with SkyNews, Sapozhnikov recalled feeling unwell and developing a fever that lasted for two days before noticing two pox-like lesions.

“I believe that social awareness is more important than any stigmas. No illness is embarrassing,” Sapozhnikov wrote in the caption of another video on Instagram.

A TikTok user who goes by Josh Jones and @ava__monet on social media posted a clip three days ago showing monkeypox lesions after one week, which has since gotten over 3.1 million views.

Gesturing to monkeypox lesions all over the chest and face, Jones said the bumps were finally starting to scab over and but would take two more weeks to heal. “I am feeling a lot better since I’ve been on the medicine which is TPOXX,” Jones added. (TPOXX or tecovirimat was approved by the U.S. Food and Drug Administration in 2018 to treat smallpox, which belongs to the same virus family as monkeypox, and it can be used for patients with severe disease or those at high risk of becoming severely ill, according to the Food and Drug Administration).

Another monkeypox patient who took to social media to share their journey and spread awareness is Joshua Wright, a personal coach who posted a TikTok on July 9 showing examples of lesions at different stages of development.

Wright first shows a lesion on the leg in an earlier stage of development: “It looks like a bug bite slash pimple. … It’s also starting to develop a little red circle in the center,” Wright said in the video. Pointing to a face lesion that was further along, Wright pointed out the “white head” forming.

RELATED: I currently have monkeypox, and the symptoms are so painful I almost passed out

Finally, Wright pointed to a lesion on the wrist that was swollen and looked fluid-filled. “It’ll pop, (but) it won’t pop like a pimple,” Wright said, adding that the lesion was very painful but would soon reach the healing stage and scab over.

How is monkeypox spread?

Monkeypox is spread predominantly through close, skin-to-skin contact, experts previously told TODAY. This can include sexual activity but also kissing, hugging, touching and other non-intimate direct contact. The virus can spread through an infected person’s lesions, scabs, bodily fluids, respiratory secretions or contaminated materials, such as bedding, clothing or towels.

Symptoms typically appear within three weeks of exposure to the virus, according to the U.S. Centers for Disease Control and Prevention. Monkeypox lesions can appear anywhere on the body or remain isolated to the region where contact with an infected person occurred, Roberts previously told TODAY.

Anyone who has a suspected case of monkeypox or exposure should contact their doctor or local health department to get tested.