Home World ‘My new life with a stranger’s face’ 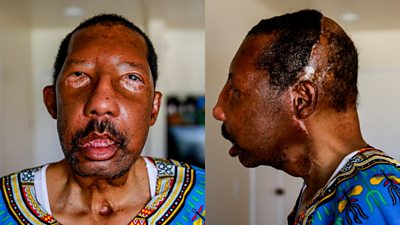 Eight years ago, Robert Chelsea sustained third-degree burns on more than half of his body when his car was hit by a drunk driver. In 2019, he became the first ever African American recipient of a full-face transplant.

This is story of his recovery, a remarkable test of faith, identity and character.

Since the first partial face transplant was performed in 2005, there have been less than 50 worldwide. According to federal data, in 2015 17% of black patients awaiting an organ transplant received one, compared to 30% of white patients.

With thanks to Brigham and Women’s Hospital