Home World Octopuses Caught on Camera Throwing Shells at Each Other 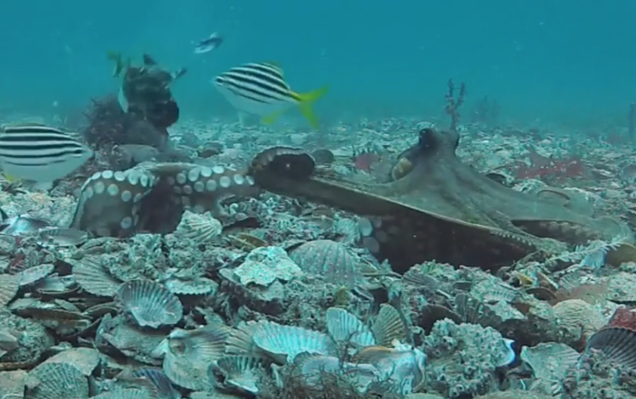 An octopus throws a couple of shells toward another octopus and appears to reach out with one arm.

Underwater video cameras have recorded over 100 instances of gloomy octopuses hurling silt and shells at one another in Jervis Bay, Australia.

The video footage—about 24 hours’ worth—was captured in 2014 and 2015, but only now have the videos been fully analyzed. The team of researchers that studied the behavior has published their findings today in Plos One.

The gloomy (or common Sydney) octopus (Octopus tentricus) is native to the waters off the coasts of Australia and New Zealand. It has a rusty brown coloration and white eyes. The octopus mostly eats mollusks but has also been documented eating members of its own species, according to the Australian Museum.

In the videos, the eight-armed cephalopods gather up material from the seafloor like silt and shells, and then push it through the water using their siphon and arms. Octopuses have previously been observed shooting sand from their siphon but never throwing more substantial objects like seashells.

The researchers found that the octopuses had to move their siphons into an unusual position—under the web of the octopus’ arms—to eject the material, indicating that they were intentionally throwing the material.

The teams observed both sexes throwing material; about half of the throws were done while interacting with other octopuses. Only about 17% of the throws actually hit their targets, so if you’re a sports agent reading this, think twice before signing up a gloomy octopus. The eight arms clearly aren’t as much of an advantage as they seem.

And if we’re splitting hairs (or gills, or whatever), the octopuses are not hurling objects at their foes, Cy Young-style. The propulsion is entirely driven by their siphons; the arms are simply directing the material.

But look up the definition of “throw.” Technically, that’s what the octopuses are doing, though it’s a tenuous enough connection that the researchers refer to the action as “throws,” in quotations.

Because some of the throws were by male octopuses and some by female octopuses, and they occurred both in the presence and absence of other octopuses, the researchers aren’t exactly sure of the motive here. At least in some cases, the team believes the throws have a social purpose. And considering that in some of the videos the octopuses are literally blanketed in silt tossed at them by a nearby octopus, that seems correct.

Octopuses are generally anti-social, the researchers noted in the study, but sometimes show tolerance of other individuals. But what covering another member of your species in silt, algae, and shells signifies may require further examination.

The throwing behavior puts the gloomy octopus on a short list of species that have exhibited a type of throwing behavior, along with chimpanzees, capuchin monkeys, elephants, polar bears, Egyptian vultures, and a few others.

Octopuses are very bright creatures. They probably have a good reason for chucking stuff. We just need to be bright enough to figure out what they’re up to.

More: Researchers Finally Figured Out How Octopuses Taste With Their Arms