Home World Photos: How newspapers around the world covered the deadly riots at U.S.... 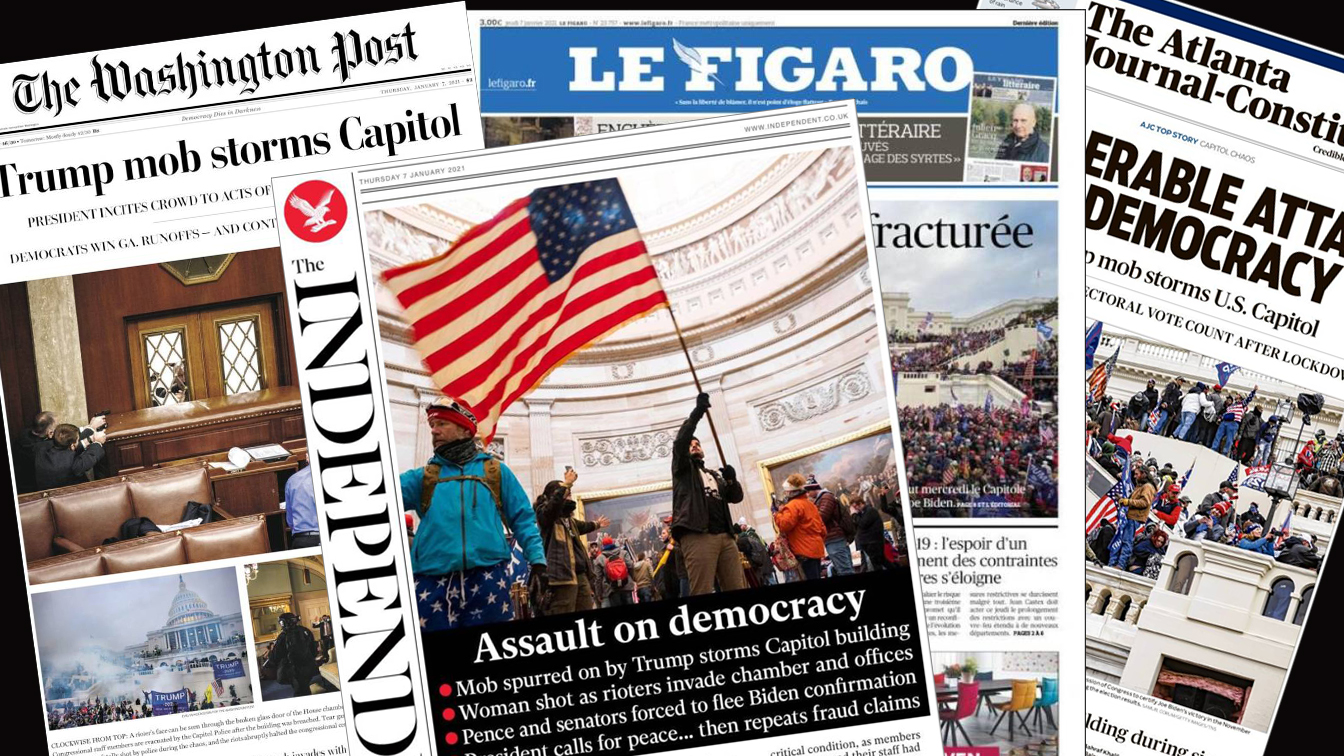 If Sen. Josh Hawley (R-Mo.) thought leading the small band of Republican senators to challenge President-elect Joe Biden’s electoral victory on Wednesday would benefit him politically, it appears the opposite happened.On Thursday, political mentor former Sen. John Danforth (R-Mo.) called supporting Hawley’s Senate bid “the worst mistake I ever made in my life,” a GOP donor who gave millions to his campaigns denounced him as “a political opportunist willing to subvert the Constitution,” Simon & Schuster canceled his book deal, and Missouri’s two biggest newspapers called on him to resign immediately.> From our Francis Chung, Sen. Josh Hawley greeting protesters in the east side of the Capitol before riots began. pic.twitter.com/I8DjBCDuoP> > — Manuel Quinones (@ManuelQ) January 6, 2021″If Hawley had shown any evidence that there’s a conscience in there somewhere, underneath the ambition and the artifice and the uncommon combo of striving and laziness that he’s somehow made work for him,” he’d resign, The Kansas City Star said in an editorial. “We can’t appeal to a sense of decency that doesn’t exist. But we can say that Hawley, who gave a raised fist of encouragement to the likes of that proud lout who put his feet up on House Speaker Nancy Pelosi’s desk, cannot continue to be our man in Washington, and so will have to be expelled.” The Senate, the Star editorialists added, “must do more than censure his treasonous behavior.””Hawley’s tardy, cover-his-ass condemnation of the violence ranks at the top of his substantial list of phony, smarmy, and politically expedient declarations,” the St. Louis Post-Dispatch said in an editorial. “Hawley’s presidential aspirations have been flushed down the toilet because of his role in instigating Wednesday’s assault on democracy. He should do Missourians and the rest of the country a big favor and resign now.”Joplin businessman David Humphreys, who personally and with his family largely bankrolled Hawley’s state attorney general and Senate races, told the Missouri Independent on Thursday that Hawley “has shown his true colors as an anti-democracy populist by supporting Trump’s false claim of a ‘stolen election,'” and urged the Senate to censure him.Simon & Schuster, meanwhile, said it “cannot support Sen. Hawley after his role in what became a dangerous threat to our democracy and freedom.”> pic.twitter.com/NdIkmGbCFI> > — Simon & Schuster (@simonschuster) January 7, 2021Hawley said Simon & Schuster was making a “direct assault on the First Amendment” and threatened to sue for breach of contract.More stories from theweek.com Washington Times corrects widely cited story claiming ‘antifa’ infiltrated Capitol siege, says ‘neo-Nazis’ ID’d The decline and fall of Donald Trump Maryland governor said he was repeatedly denied authorization to send National Guard to D.C.

Google threatens to remove search from Australia over new law

Alabama grapples with deadliest week yet during pandemic