April 1 (UPI) — Pope Francis made a formal apology Friday for the Roman Catholic Church’s role in operating Canada’s system of residential schools, in which thousands of Indigenous children were taken and abused over a period of several decades.

The pope issued the apology at the Vatican directly to a 62-member delegation at the Apostolic Palace made up of members of Canada’s three largest Indigenous groups.

“I also feel shame … sorrow and shame for the role that a number of Catholics, particularly those with educational responsibilities, have had in all these things that wounded you,” he said. “And the abuses you suffered and the lack of respect shown for your identity, your culture and even your spiritual values.”

The historic apology was the first by the pope to Canada’s Indigenous community. Thursday, he met privately with the delegation, accompanied by several Canadian Bishops. It was his third such visit this week after having earlier met with Mètis and Inuit representatives separately.

The pontiff also said he hoped to visit Canada in the future, a prospect welcomed by the delegates. 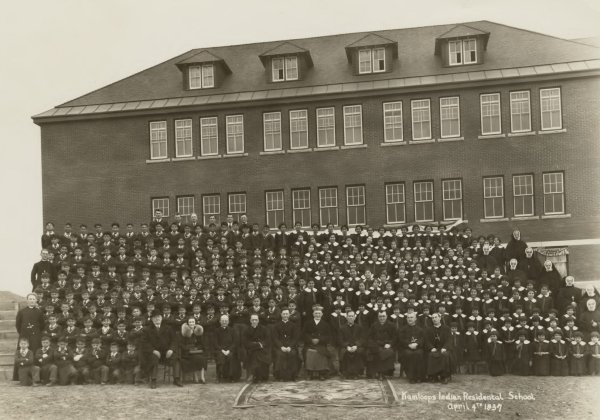 The Kamloops Indian Residential School in Kamloops, British Columbia, Canada, is seen in 1937. Last summer, a mass grave was located at the site of the school that contained the bodies of 215 children whose deaths went undocumented. File Photo by University of Manitoba/National Center for Truth and Reconciliation/EPA-EFE

“It’s a historical first step. However, only a first step. The next step is for the Holy Father to apologize to our family at their home. We seek to hear his words. They also seek the words of apology at home,” Dene National Chief Gerald Antoine said according to the CBC.

There have long been calls for an official Vatican apology for the role the church played in Canada’s residential school system, but Francis repeatedly declined to do so until Friday. The calls were amplified last summer after hundreds of unmarked graves were uncovered at the sites of a number of the former Indigenous schools.

It’s believed that about 150,000 Indigenous children in Canada were forcibly taken from their families and sent to the schools between the 1800s and the 1970s. There, they often experienced physical and sexual abuse, as well as disease. The Catholic Church ran most of those schools on behalf of the Canadian government.

Five years ago, Canadian Prime Minister Justin Trudeau publicly called for Pope Francis to formally apologize. After considering the request, the pope declined — with one bishop saying that “he felt that he could not personally respond.” He again passed up an opportunity to apologize last summer.