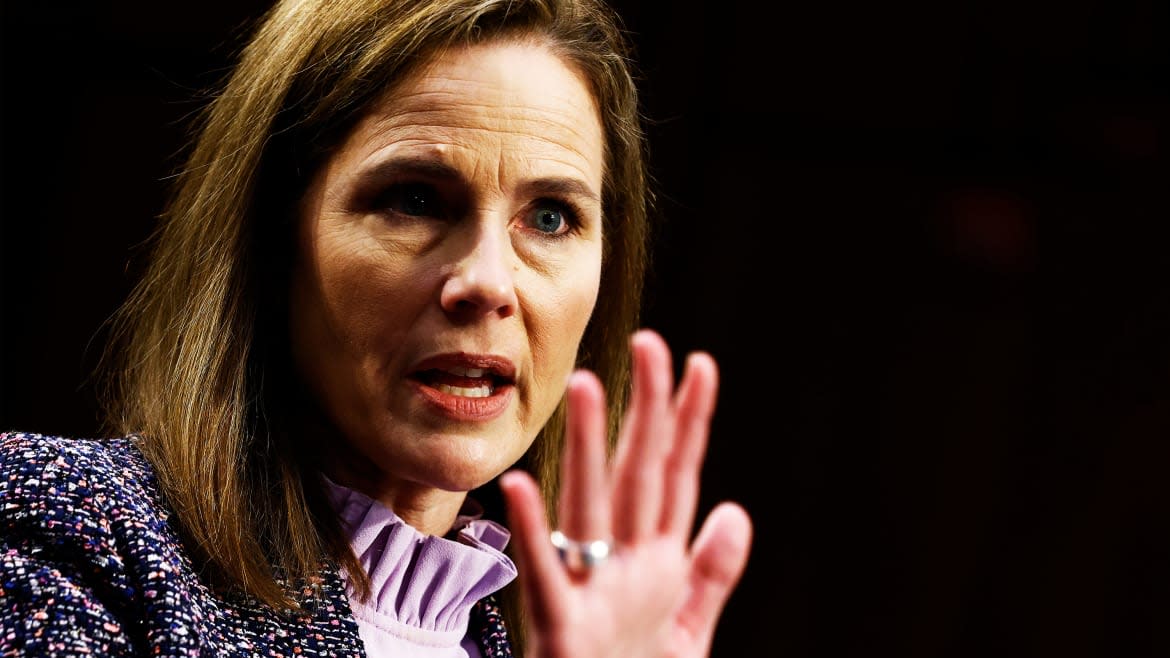 Who fills the next Supreme Court vacancy matters—and it may even impact your sex life.

As if worrying about the career persecution wasn’t enough, Siri anticipates a worse threat will hit much sooner. “I’m worried most about reproductive rights. Our rights to important health care like birth control and abortion are in imminent danger. It’s especially scary to me as a sex worker who also happens to have a uterus,” says Dahl. “I’d like the government to stay away from my sex organs and my personal health decisions!”

That’s unlikely given the Supreme Court’s current conservative majority, which if Barrett is appointed, will become 6-3, reaching an imbalance that could last for decades. It’s a potentially frightening group with the power to reshape our legal framework but without the wisdom to effectively balance it. Pornography laws are a prime example of striking that necessary balance.

Sexually explicit material is protected by the First Amendment except in such cases where it can be prosecuted for obscenity or child pornography. Obscenity, as the Supreme Court ruled in 1957 (Roth v. United States), is not protected by the First Amendment. To be obscene it must “be utterly without redeeming social value” and “of prurient interest.” However, much of this was decided case-by-case and left to the interpretation of the court, with Justice Potter Stewart famously explaining, “I’ll know it when I see it,” regarding his method of determination on a 1964 obscenity case involving the Louis Malle film The Lovers (Jacobellis v. Ohio).

Without a measurable standard, obscenity could be even more subjective. It wasn’t until 1973’s Miller v. California case when the court engineered a three-part approach to measuring obscenity (known as the Miller test). These criteria continue to inform how the lines are drawn between adult entertainment protected as free speech verses similar, but prosecutable, content found to be “patently offensive,” and lacking in “serious literary, artistic, political, or scientific value.” The court’s interpretation of obscenity and freedom of speech nearly 50 years ago shaped the legal framework today’s adult industry operates within, which is why who fills that seat matters. In years to come they will be dictating the existence of porn—and quite possibly free speech with it.

“The adult industry is founded on bodily autonomy and freedom of expression, freedoms that religious extremist Barrett will happily erode or remove. She will even be considering First Amendment cases that could outlaw porn. While she claims to be for freedom and liberty, it’s clear she will happily regulate the bedroom on- and off-screen,” warns adult actress and former Penthouse Pet Mary Moody. “We might hope that Barrett could separate her extremist religious beliefs from her judgments but while teaching law she argued justices should be allowed to judge based on these beliefs. Her history speaks for itself, and when given the option to rule on cases that will impact sex workers, it is clear she will lean on her radical conservative religious beliefs to aid her.

“I have the integrity to act consistently with my oath and apply the law as the law,” Barrett claimed during the Senate confirmation hearings. Nonetheless, it’s nearly impossible to believe her religious views won’t impact her judicial duty to the law.

“I suspect that from what we know of her religious beliefs, that any anti-porn cases that come before the court will stand a good chance of winning for the religious right agenda. This goes hand-in-hand with reproductive, women’s, and civil rights protections under the 14th Amendment,” says Angie Rowntree, founder of Sssh.com, the web’s first porn-for-women feminist site. “Considering that Supreme Court seats are ‘for life’ her religious/conservative agenda will push the U.S. back to 1960 for a generation in some societal and legal aspects. The TV show Mad Men is enjoyable to watch on television, but not to watch play out in the highest court in the land which affects the lives and rights of millions every day.”

Adult model and content creator Bea York says she’s worried but still trying to be optimistic. “Here’s a person that might have the power to undo a lot of important things. As a woman, I’m most concerned with other women getting the help that they need, when they need it. After that, I worry about the impact of having someone on the Supreme Court that seems pretty far removed from the big issues that people are dealing with,” York muses.

Having presided over 10,000 cases, Judge Herb Dodell, author of From the Trench to the Bench, understands the value of separation of church and state and the importance of it as a judge. He questions Barrett’s ability to disengage from her personal biases when deciding a case. “For the adult industry, her confirmation could have a substantial impact. For example, SESTA/FOSTA. That legislation will be before the Supreme Court. The whole subject of free speech versus prior restraint, including liability, especially concerning social media, will be dictated by the Supreme Court. My biggest concern was the equivalent of her saying she would not necessarily be bound by stare decisis (precedent). I would also be concerned about the lack of response regarding severability, which could lead to an all-or-nothing situation,” says Judge Dodell.

“As judges, we are supposed to follow the law, whether we agree with it or not. I am not sure she can do that, given her strong views.”

Read more at The Daily Beast.

Get our top stories in your inbox every day. Sign up now!

Daily Beast Membership: Beast Inside goes deeper on the stories that matter to you. Learn more.