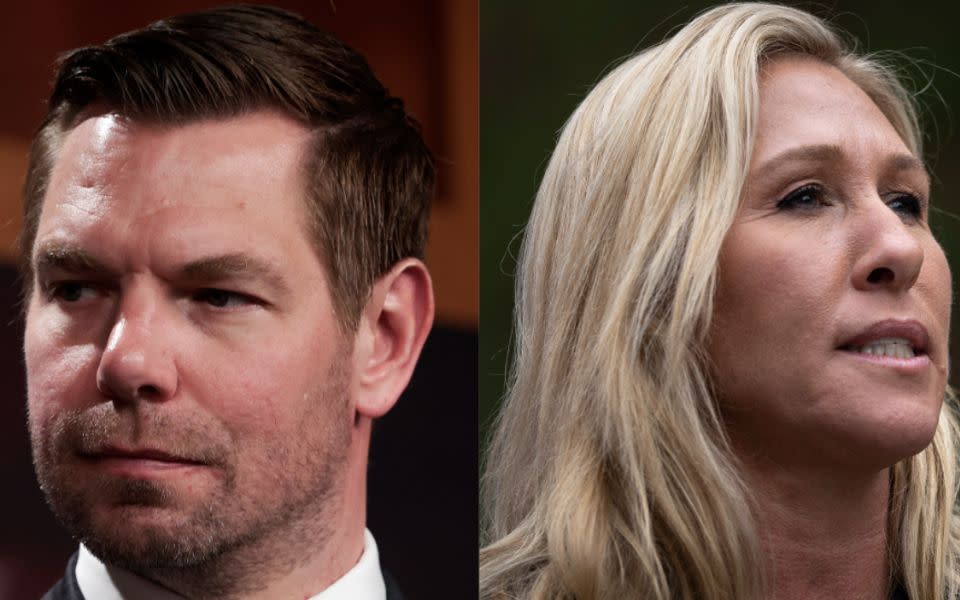 Rep. Eric Swalwell (D-Calif.) shared an audio recording of a disturbing threat Wednesday that he said he received because of false statements made by Rep. Marjorie Taylor Greene (R-Ga.).

“Marjorie loves to play the victim. But she’s an inciter of violence. Her constant attacks — even after the FBI said I was never suspected of wrongdoing — lead to threatening calls like this,” he tweeted alongside the audio clip. “This caller from today threatened to kill my three children.”

In the recording, a man’s voice said: “Hey, you little cocksucker. You still banging the Chinese spy Fang Fang? … We’re coming to your house this weekend. Gon’ get you and them little mutant bastards, them little mutant offspring of yours. We’re gon’ get ya.”

Earlier Wednesday, Swalwell had shared a story about an interaction with a supporter of former President Donald Trump that happened while the congressman was giving a tour of the U.S. Capitol. He said a man shouted at him and then told his son, “That’s Swalwell. He’s trouble. He doesn’t back Trump.”

Today I gave a tour in the Capitol and was stopped by a father with his young boy. The father yelled at me “Hey Swalwell” and then told his son, “that’s Swalwell. He’s trouble. He doesn’t back Trump.” I kept walking and felt sad for the boy. He’s being raised in a cult family.

Greene responded to the tweet by saying there was “no way that happened.”

“Because we all know good Trump supporting fathers would say, “that’s the Democrat who had sex with a Chinese spy,” she tweeted.

Swalwell has been targeted by right-wing disinformation over his past connection to a suspected Chinese intelligence operative named Fang Fang or Christine Fang.

According to a 2020 Axios report, Fang targeted up-and-coming politicians in the Bay Area and the U.S., including Swalwell. Fang reportedly took part in fundraising activity for Swalwell’s 2014 reelection campaign and recommended an intern for his office.

Federal investigators said they alerted Swalwell to their concerns in 2015 and he immediately cut all ties with Fang, Axios reported. He was not accused of any wrongdoing or of passing on any classified intelligence.

Fang allegedly had sexual relationships with at least two Midwestern mayors. Swalwell was not accused of having sex with her.