Ukrainian Deputy Defense Minister Hanna Maliar said it appears that Russia is pushing to reach the borders of the Luhansk region by the end of the week. ABC News reported Russia now holds about 96% of the Luhansk oblast.

The fighting in Ukraine will begin its fifth month on Friday, and Russian forces were struggling to capture some key parts of the Donbas, which comprises the Luhansk and Donetsk oblasts in eastern Ukraine.

“The Russian army has thrown virtually all its forces and means in order to storm the settlements around [Severodonetsk],” Maliar said according to The Guardian.

“They seek to break through the defenses of our troops and are trying to encircle the grouping of our troops, which is carrying out the defense of Lysychansk and Severodonetsk.”

Serhiy Haidai, head of the Luhansk Regional State Administration, said Ukrainian forces control the city of Lysychansk, which is on elevated ground and currently holds about 10,000 civilians.

Russian troops were able to break through Ukraine’s front line in another suburban town in Toshkivka, allowing them to threaten Ukrainian supply lines for Severodonetsk, Ukrainian officials said.

The fight for Severodonetsk has dragged on for weeks and remains key to Moscow securing the Donbas region, where Russian efforts have been slowed by stiff Ukrainian resistance.

Britain’s Defense Ministry, which has been monitoring the fighting, said Tuesday that Ukraine’s use of a Western-supplied Harpoon anti-ship missile to sink a Russian resupply tug represented an important point of the war. It said the tug was sending weapons and personnel to Snake Island in the northwestern Black Sea.

“The destruction of the Russian vessel on a resupply mission demonstrates the difficulty Russia faces when attempting to support their forces occupying Snake Island,” the ministry said in a tweet. “This is the latest in a series of Russian vessels, including the cruiser Moskva, to be damaged or destroyed by Ukraine during the conflict.

“Ukrainian coastal defense capability has largely neutralized Russia’s ability to establish sea control and project maritime force in the northwestern Black Sea. This has undermined the viability of Russia’s original operational design for the invasion, which involved holding the Odessa region at risk from the sea.”

Kremlin spokesman Dmitry Peskov, meanwhile, said that two U.S. military veterans who were captured while fighting for Ukraine could face the death penalty.

“It depends on the investigation,” Peskov said according to NBC News. “Those guys on the battlefield were firing at our military guys. They were endangering their lives. There will be a court, and there will be a court decision. They should be punished.”

The families of the men — Alexander Drueke, 39, and Andy Huynh, 27 — said they went missing earlier this month while they were fighting with Ukrainian forces.

Russia has already sentenced two British citizens and a Moroccan man to death after they were captured while fighting with Ukrainian troops. 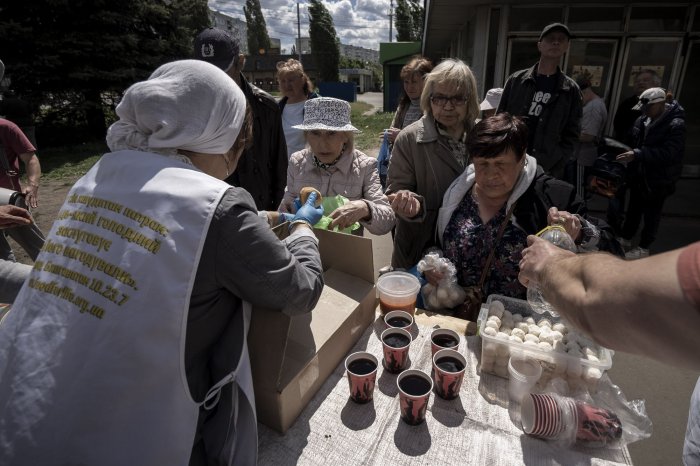 A woman eats food given to her by volunteers at a food delivery station run by a Hare Krishna group in Kharkiv, Ukraine, on May 20, 2022. Photo by Ken Cedeno/UPI | License Photo