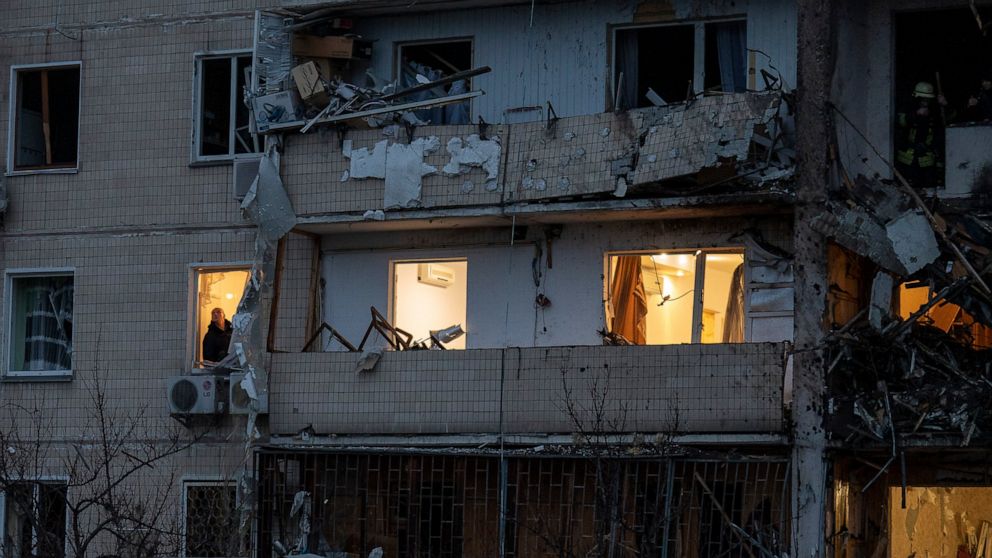 KYIV, Ukraine — Associated Press journalists around Ukraine and beyond are documenting military activity during Russia’s invasion. With disinformation rife and social media amplifying military claims and counterclaims, determining exactly what is happening is difficult. Here’s a look at what could be confirmed Friday.

— Explosions heard from central Kyiv, about 800 meters (half a mile) from the president’s headquarters.

— Multistory apartment building in Kyiv hit by shelling, with major damage, on the eastern side of the Dneiper River that cuts through the capital, 13 kilometers (8 miles) southeast of the government quarter.

— Shooting near a main thoroughfare leading into central Kyiv from the south.

— Ukrainian soldiers evacuating an unmarked military vehicle damaged by gunfire in Kyiv, in the Obolon district about 10 kilometers (6 miles) north of the government quarter.

— Russian missile launcher seen on the edge of the northeastern city of Kharkiv, shelling heard in the distance.

— A bridge destroyed at Ivankiv, some 60 kilometers (40 miles) northwest of Kyiv.

Announced by Ukrainian and Russian authorities, and others:

— A second Russian military transport plane was shot down Saturday near Bila Tserkva, 50 miles (85 kilometers) south of Kyiv, according to two American officials with direct knowledge of conditions on the ground in Ukraine.

— Russian Airborne Forces on the outskirts of Kyiv early Saturday attacked Ukrainian units on three sides, but Ukrainian troops were able to repel some of the assaults, according to two American officials with direct knowledge of conditions on the ground in Ukraine.

— Ukraine’s military said Friday it had shot down a Russian military transport plane carrying paratroopers near Vasylkiv, a city 25 miles (40 kilometers) south of Kyiv, an account confirmed by a senior American intelligence official. It was unclear how many were on board. Transport planes can carry up to 125 paratroopers. Russia has not commented on the incident.

— A senior American intelligence official with direct knowledge of conditions on the ground in Ukraine said the capital city of Kyiv was under missile bombardment late Friday night. The official, who spoke on condition of anonymity, had no immediate information on what targets might have been hit.

— Russia’s military said it has taken over Melitopol, a city in the Zaporizhzhia region in southern Ukraine 50 kilometers (about 31 miles) off of the Azov Sea coast. The claim could not be independently verified.

— Ukraine’s nuclear energy regulator said higher than usual gamma radiation levels have been detected in the area around the Chernobyl nuclear plant, site of the world’s worst nuclear accident, after it was seized by the Russian military. The International Atomic Energy Agency said the reported levels don’t pose any danger to the public. The Russian Defense Ministry said radiation levels in the area have remained normal.

— Kyiv Mayor Vitaly Klitschko said gunfire and explosions in several parts of the city came as Ukrainian troops were fighting groups of Russian saboteurs. He also said five explosions hit an area near a major power plant on the city’s eastern outskirts. No electricity outages were immediately reported.

— U.K. Defense Intelligence Chief Sir Jim Hockenhull says Russia launched a series of strikes on targets in Kyiv overnight and that multiple rocket launchers have been employed in Chernihiv and Kharkiv.

— Ukrainian President Volodymyr Zelenskyy said that 137 “heroes,” including 10 military officers, had been killed. The Ukrainian military said it has killed over 1,000 Russian troops while fending off Moscow’s invasion. The Russian military hasn’t reported any casualties during the attack. Neither claim could be independently verified.

— The U.N. High Commissioner for Human Rights said its staffers have so far verified at least 127 civilian casualties, 25 people killed and 102 injured, mostly from shelling and airstrikes.

— The Russian military said it took control of an airport outside the Ukrainian capital. The airport in Hostomel, a town 7 kilometers (4 miles) from Kyiv, has a runway long enough to receive all types of aircraft, including the biggest cargo planes. Its seizure allows Russia to airlift troops directly to Kyiv’s outskirts.

— The Russian Defense Ministry said its forces sealed the cities of Sumy and Konotop in northeastern Ukraine. It said they have knocked out 211 military infrastructure facilities. The claims couldn’t be independently confirmed.

— The mayor said a school building was hit by a Ukrainian shell in the rebel-held city of Horlivka in eastern Ukraine, killing its headteacher and a teacher; rebels who hold Donetsk said the city’s main hospital was damaged by shelling but there were no casualties.

— A U.S. defense official said a Russian amphibious assault was underway, and thousands of Russian naval infantry were moving ashore from the Sea of Azov, west of Mariupol. The official said Ukrainian air defenses have been degraded but are still operating, and that about a third of the combat power that Russia massed around Ukraine is now in the country.

— British Intelligence Chief Sir Jim Hockenhull says Russia launched a series of strikes on targets in Kyiv overnight and that multiple rocket launchers have been employed in Chernihiv and Kharkiv.

Follow AP’s coverage of the Ukraine crisis at https://apnews.com/hub/russia-ukraine