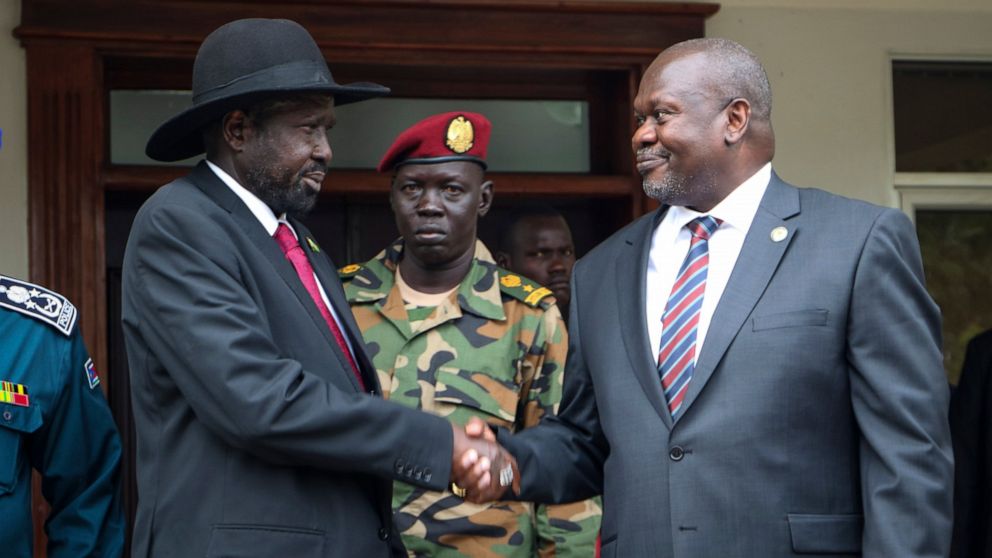 JUBA, South Sudan — South Sudan’s president and his deputy signed an agreement Sunday to unify the command of the security forces, a deal that eases political tensions in the East African country.

Clashes in recent days between government troops and forces loyal to Vice President Riek Machar raised the threat of another outbreak of serious fighting. In a letter to regional mediators, Machar had accused President Salva Kiir of violating a 2018 truce, citing attacks on his forces.

Sunday’s agreement calls for a unified structure in the security services, including the army and the police, with 60-40 distribution in favor of Kiir’s side.

Other details, including the positions allocated to each party, were not immediately available.

Both Kiir and Machar witnessed the signing ceremony in Juba, the South Sudan capital, where on Monday there was heavy military deployment, highlighting growing tensions.

“This is to inform everyone that we have agreed to unify the military command. We are for peace and that all of us should strive for peace,” said Tut Gatluak, a presidential advisor on national security.

Martin Gama Abucha, the mining minister who is a member of Machar’s team, said the event was key to maintain peace in the country.

“It is important that we silence the guns, so that South Sudan can prosper,” he said.

There were high hopes for peace and stability when oil-rich South Sudan gained its long-fought independence from Sudan in 2011. But the country slid into civil war in December 2013 largely based on ethnic divisions when forces loyal to Kiir battled those loyal to Machar.

Tens of thousands of people were killed in the civil war which ended with a 2018 peace agreement that brought Kiir and Machar together in a government of national unity.

But challenges remained, including the government’s failure to implement promised reforms such as completing the unification of the army command.

The U.S., the U.K. and Norway — the troika supporting South Sudan’s peace deal — said recently they were concerned that the new outbreak of fighting threatened to undermine the government’s unity.