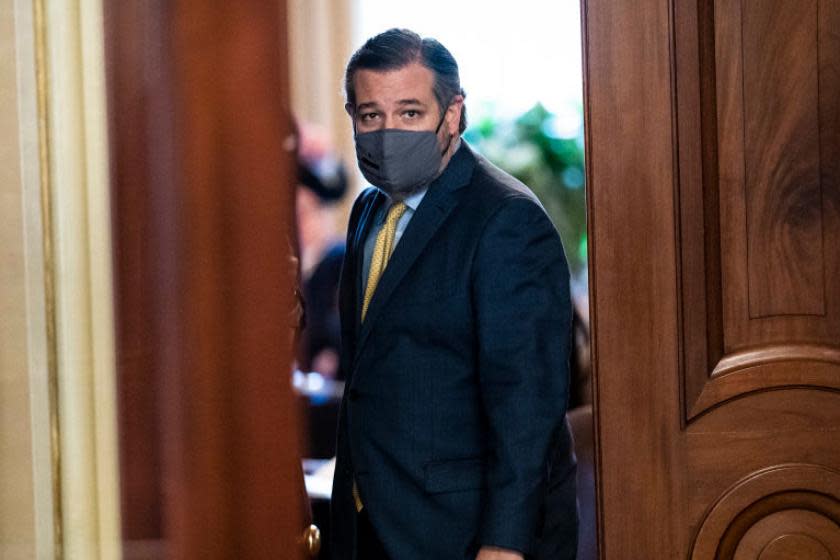 While millions of Texans were without power in below-freezing temperatures Tuesday night, Texas. Gov. Greg Abbott (R) went on Fox News and told Sean Hannity that the failure of the state’s power grid “shows how the Green New Deal would be a deadly deal for the United States of America.” Abbott said “our wind and our solar got shut down,” which “thrust Texas into a situation where it was lacking power in a statewide basis.” The main culprit for the Texas power outages is failures in the natural gas sector, though, so on Wednesday, Abbott walked back his comments. “I was asked a question on one TV show about renewable, and I responded to that question,” Abbott said. “Every source of power that the state of Texas has has been compromised, whether it be renewable power such as wind or solar, but also, as I mentioned today, access to coal-generated power, access to gas-generated power, also have been compromised.” For all of 2020, 40 percent of Texas energy came from natural gas–fired plants, 23 percent from wind turbines, 18 percent from coal, and 11 percent from nuclear power, according to the Electric Reliability Council of Texas (ERCOT), which manages the Texas power grid. But in the winter, only about 7 percent of ERCOT’s capacity was projected to come from wind sources. “Texas is still fossil-fueled,” and it’s obviously silly to suggest “the Republicans who run the state had accidentally adopted a Green New Deal that eliminated fossil fuels and destroyed the reliability of the grid,” Michael Grunwald writes at Politico. “The real problem in Texas is the freaky weather, and unfortunately, climate change is delivering a lot more freaky weather” — a phenomenon Texas Tech climate scientist Katharine Hayhoe calls “global weirding.” Abbott, in explaining the Texas grid failures, pleaded Wednesday that “this is a once-in-every-120-year cold front that we have to respond to.” But “today, only a fool expects a hundred-year drought or flood or snowfall event to happen once every hundred years,” Grunwald said, and Texas — and America — need to prepare accordingly. More stories from theweek.comBeto O’Rourke is organizing wellness checks for seniors during Texas’ blackouts. Ted Cruz is in Cancun.Dolly Parton politely asks Tennessee not to erect a statue of her on Capitol groundsThe parts of Texas not on its ERCOT power grid appear to have weathered the freeze with few outages

State Dept.: U.S. did not ‘make demands’ on South Korea in cost-sharing negotiations

Trump, RNC clash over using his name in fundraising