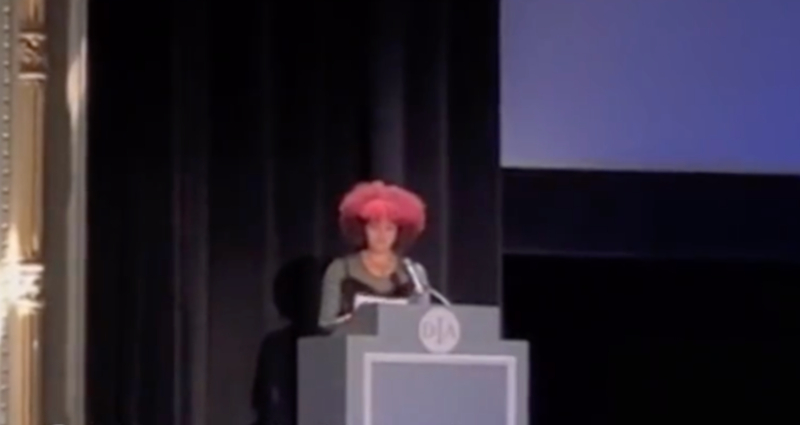 A 19-year-old TikTok user has gone viral after sharing a video of their eulogy to their deceased father at his funeral, in which they call him a “racist, misogynistic, xenophobic, Trump-loving” man.

The user, identified as Saga, goes by the handle @saginthesunforever and has self-described themselves as a “Black supremacist” on their TikTok bio. Saga, who uses the pronouns they/them, has received widespread backlash after their viral video was re-posted to Twitter by controversial conservative account Libs of TIkTok on Tuesday.

In the video, Saga can be seen on stage delivering their eulogy speech to their father at his funeral.

“Dad, please know that while I am grateful and highly aware of all that you’ve given this family, I still don’t miss you,” Saga says. “When you died, I felt like there was a hole. I missed something, but it wasn’t you. It was the idea of what you could [have] become. I missed being able to hope and wish that one day you’d turn a corner and see the world from my perspective. I missed the idea that one day you might help me fight for the things that matter. I miss my fantasy of you.”

“Because when you died, it solidified the fact that you’ll never be what you could have been, but only what you are,” they add. “And what you are is a racist, misogynistic, xenophobic, Trump-loving, cis, straight white man. That is all you will ever be to me.”

To conclude their eulogy, Saga says, “You are everything I aspire not to be…I swear to god, I will make this world a better place. Not at all because of you, but in exact opposition to you.”

Although many viewers have praised Saga for their bravery, others condemned their “disrespectful” action at the funeral of their own father.

“What a dark, wicked heart this young lady has. I’m sure there were many there that loved this man and are grieving. Even if she hated her father, she had zero concern for the pain she caused those that were mourning his loss,” one user tweeted.

“He doesn’t have to deal with her relentless hatred anymore. He’s gone and she’ll still be perpetually outraged. She really made someone else’s funeral about her. Could have skipped it, but how would she get 15 minutes of internet attention then? She’s toxic,” another user wrote.

However, the 19-year-old reportedly defended their speech to The National Desk (TND), noting that they wanted to “stand firm in their truth and speak it no matter what dissenting opinions would say.”

“Funerals and speeches are to provide solace to the people giving them,” Saga told TND. “My solace was in my truth. It was in expressing and condemning all of the trauma my father has caused me and expressing my grief the way I needed to express it.”

“Some people think the funeral wasn’t the right place but what was the right place? When EVER would I get another opportunity to speak my truth and not just on TikTok to a screen but REALLY speak it,” Saga added. “A part of me wanted to prove to myself that I had the bravery and the balls to be able to stand in my truth and belt it out to whoever could hear which is why I did it.”

Former U.S. President Donald Trump has infamously been known to spread anti-China rhetoric through his repeated use of terms like “Chinese virus,” “Wuhan virus” and “Kung Flu” amid the COVID-19 pandemic. His use of racist terms have been blamed for fueling anti-Asian hate in America amid the global pandemic.

Last year, Trump was sued by the Chinese American Civil Rights Coalition (CACRC) for defamation and infliction of emotional distress. The organization claimed that Trump’s rhetoric has contributed to the rise of violence against Chinese and other Asian Americans.

Last week, Trump took a swing at Virginia Gov. Glenn Youngkin, saying that his last name was Chinese-sounding, once again deploying the “Chinese” descriptive in a negative way. The incident was described by Maryland Gov. Larry Hogan as “racist” and “Asian hate against a white governor.”

“It was definitely distasteful and inappropriate, not only because I don’t think my friend Glenn Youngkin deserved to be attacked like that, but it was also — I mean, it’s Asian hate against a white governor, and making fun of Asians,” Hogan said.

“He didn’t even have his nationalities, right, because Young Kin would be Korean, as opposed to Chinese,” Hogan added. “But it’s just more of the same from Donald Trump, insults and attacks. And that’s one of the reasons why the party is in such bad shape.”