Home World This viral video of a little girl stopping a Black model to... 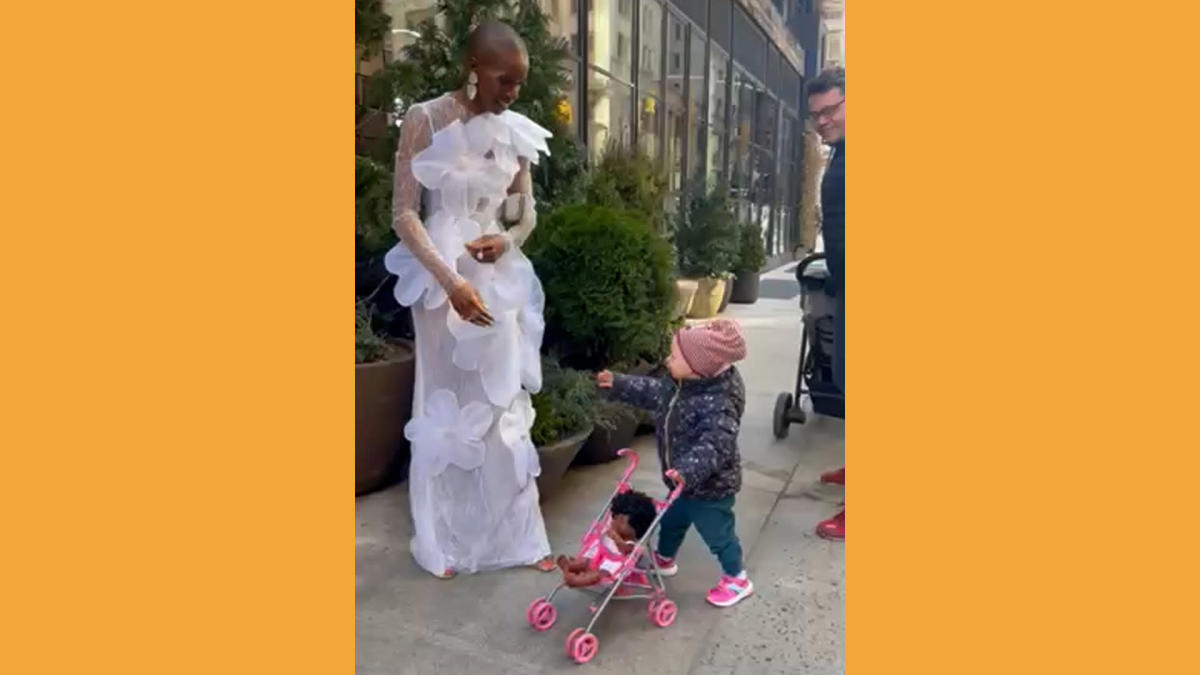 Monica Ahanonu might be a model, but she’s not always comfortable with people staring at her.

It’s why, after getting all gussied up for a big event, dressed in a white designer gown, makeup done, and heels strapped on, she still felt the flutter of nerves.

Still, at a friend’s insistence, Ahanonu stood for a few photos on the street to capture her look. While her friend snapped pictures, Ahanonu realized a father and his toddler were nearby, looking on and waiting to pass. “I felt bad they were waiting. So I told him to go, and the dad said that his daughter might take a walk across the street,” Ahanonu explained, adding that she didn’t mind waiting. After all, since she’s not great with having people gawk at her, she was feeling timid.

That’s the funny thing about children, Ahanonu, 31, noted. They don’t pick up on the insecurities adults accumulate over their lifetimes.

In a video captured by Ahanonu’s friend and shared on Instagram, the little girl pushes a toy stroller past the model. Then, the girl pauses, lingering for a moment to size up the 5’5” model before turning her toy stroller around so that she can touch one of the flower appliqués on Ahanonu’s gown. Running interference, the girl’s father takes her hand away while Ahanonu chuckles.

The video struck a chord online and as of Friday, had nearly 4.7 million likes.

For commenters on the video, one of the most touching moments is when the little girl turned around and revealed that the doll in her stroller is Black as well.

“Girl!!!! The levels to this,” one user replied to the post, which is peppered with hundreds of heart-eyed emojis in the comments.

“Baby’s know an angel when they see one,” another wrote.

It was a touching moment, especially considering the long-held preferences for dolls in the past and the race-based prejudices that have been a factor.

In the 1940s, Dr. Kenneth Clark and his wife, Mamie Clark ( both psychologists ), conducted a series of experiments known as “the doll tests.” The experience was an effort to examine the psychological effects segregation had on Black children between the ages of three to seven. The children were asked to identify the race of the dolls, assign “good” and “bad” traits to each, and share which doll they preferred.

According to The NAACP Legal Defense and Educational Fund, Inc., the Clarks found that ‘prejudice, discrimination, and segregation created a feeling of inferiority among African-American children and damaged their self-esteem.”

In 2010, CNN commissioned another study that sought to determine if these racial biases had changed. Surveying 133 children, they found that nearly seven decades after the original test, white and Black children still preferred the white doll.

Ahanonu — a Black woman with a mother who immigrated from Uganda and a father who came from Nigeria — remembers what it was like to have race come up in her early days on the playground.

“Me and my siblings were the only Black kids in our elementary school, middle school, and high school,” she explained. “(We) had Black dolls, but I don’t think any of my friends really did.”

It’s possible that the little girl in the video has yet to experience how aspects of race affect women of color like Ahanonu on a nearly day-to-day basis. She was also likely unaware that their brief interaction would be enough to make Ahanonu feel encouraged.

“It was more (of) a confirmation like, ‘Okay, I do look good, I guess,’” she told TODAY, noting that it wouldn’t have felt quite as genuine from an adult.

Ahanonu said the interaction makes her feel hopeful for the future.

“It’s a good sign that hopefully, things will be less divided as we go forward,” she said. “These generations coming up, (they) seem to be way less divided than the generation before us… It’s subconscious stuff that we don’t even realize and didn’t realize for a long time, obviously, even when we were younger so it’s cool to see that, and I’m curious, hopeful that (younger generations’) subconscious will be different than what ours or what our parents were.”

In the meantime, Ahanonu’s holding out hope she will be able to learn more about the little girl sometime soon.

“I wish I could talk to her dad so much,” Ahanonu said. “I want to ask him about her and (see) what they thought about it.”