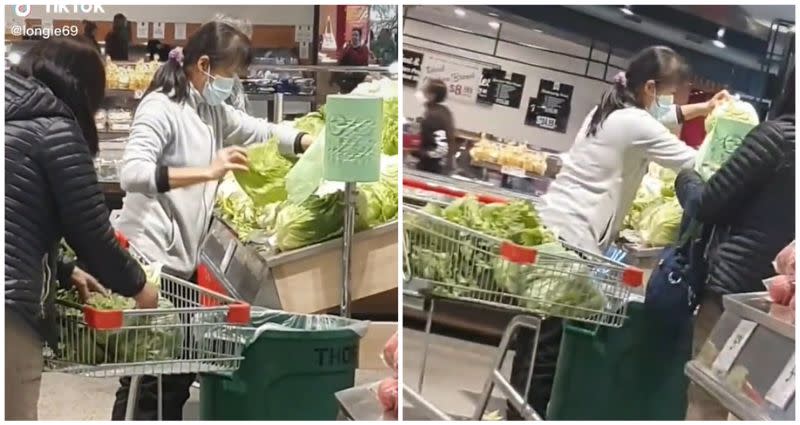 Two Asian women were filmed on TikTok pulling off the outer green leaves from several heads of iceberg lettuce while shopping at a west Australian Coles store.

TikToker James Longstaff, whose username is @longie69, posted a video on June 4 of the two women with a shopping cart full of loose lettuce leaves at one of the supermarket chain’s locations. One woman can be seen pulling the leaves off of the iceberg lettuce while the other places them into plastic bags. At the end of the video, Longstaff sarcastically says, “That’s very hygienic.”

While some internet users defended the two women, many others criticized the two for being unhygienic and not leaving enough for others.

More from NextShark: TikTok user explains why some Chinese restaurants are closed on Tuesdays

“In Europe this is common. You have scrap bins to toss out the outer layers,” one user wrote.

“They’re taking the outer leaves which are normally discarded [and] obviously can’t pay for them,” another user said.

“Lettuce is sold by ‘each’ not weight, so they’re actually stealing from everyone who buys a lettuce after them,” one user criticized.

Multiple users also observed the shoppers as “them” and “the Chinese” while implying that Asian shoppers often use “feeding chickens” as an excuse. Some commenters also mocked Asian accents while making racist jokes.

“I have seen them swap eggs out of 800g into caged egg cartons,” one user wrote. When another commenter asked who “them” is, other users responded, “Chinese.”

“Even if you say something they [say] ‘no speak English,’” another wrote.

More from NextShark: Elon Musk wants to meet his Chinese doppelganger ‘Yi Long Musk’ (‘if he is real’)

“Me no speak no engwish,” one user commented.

“Yikes the way everyones so casually racist in this comment section,” one user said in response to commenters.

More from NextShark: TikTok of diners sneaking in their own ramen to hot pot restaurant to save money goes viral